The Virginia Tech softball team will get the 2021 season off to a challenging start this weekend with a three-game series at Kennesaw State. The teams are scheduled to play a doubleheader on Saturday, February 13th followed by a single game on Sunday. It looks like the games will be streamed by Kennesaw State on their Owl Network (You Tube).  Click here for games one and two, and click here for game three.

Kennesaw State, which set an enrollment record this year with 41,000 students, competes in the Atlantic Sun conference. Similar to the Hokies, the Owls were on a roll last year prior to COVID striking, racking up a 21-4 record.

That gaudy record included a win at Top 25 Auburn – the first home opener loss in Auburn softball history.  The Owls also recorded victories over Iowa State, Penn State, and Purdue and compiled a 13-1 record at home. 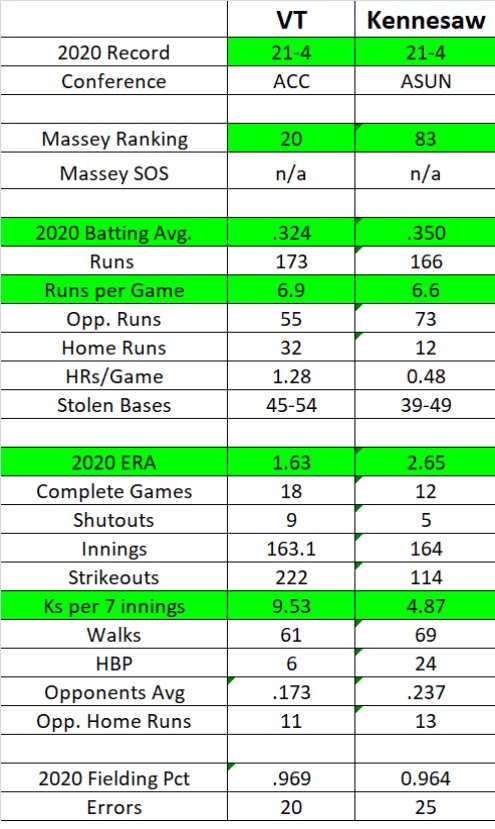 The Owls are coached by Tripp MacKay, who replaced Coach Pete D’Amour when he left for Blacksburg after the 2018 season. MacKay has compiled a 47-33 record in his two seasons at Kennesaw State. Prior to KSU, MacKay was an assistant for 10 years at Texas and Oklahoma, where his teams went to the NCAA Tournament all 10 years. During his eight seasons as at Oklahoma, the Sooners made four College World Series appearances and won the National Title in 2013.

MacKay has developed a reputation for developing hitters, and last year’s KSU team seemed to validate that as the Owls were ranked 7th nationally in batting average with a .350 mark.

Seven Owls ended the year hitting .324 or better, including four above the .400 mark. Three of those .400 hitters return this season, including senior Brea Dickey (.443), who was sixth in the NCAA with 49 hits, and eighth with four triples. Junior Katie Green was right behind her with a .431 average and Junior Taylor Cates tied for the team’s home run lead (4) while hitting .400.

“Looking at film, there aren’t many holes in their lineup,” says Hokie Coach Pete D’Amour. “And their pitching is solid.”

Speaking of pitching, Melanie Bennett made quite the impression as a freshman with an 8-2 record, a 1.85 ERA, and seven complete games to go along with two saves. The #2 pitcher at this point appears to be either sophomore Lindsey Kyte, who went 4-1 with a 2.51 ERA over eight appearances and three starts, or junior Peyton Elzey, who was 3-0 with a 4.50 ERA in eight appearances and five starts.

This should be a really good season-opening test for the Hokies before taking on Clemson and Florida State the following weekend.  The Saturday double header should also provide early insight into the Hokies’ pitching rotation as well as giving Coach D’Amour the chance to throw his newcomers into the deep water to see if they can swim.

“We’re looking forward to actually getting outside and playing someone other than ourselves,” says D’Amour. “This weekend will be a good test for us.”

I agree that it will be a good test for the Hokies. But personally, I’m just glad that softball season is here – it’s been a long time!

Below is a Virginia Tech-Kennesaw State player comparison, with the Hokies on the left and the Owls on the right.