Editor’s Note: shortly after posting this preview, the ACC announced that this game has been postponed. 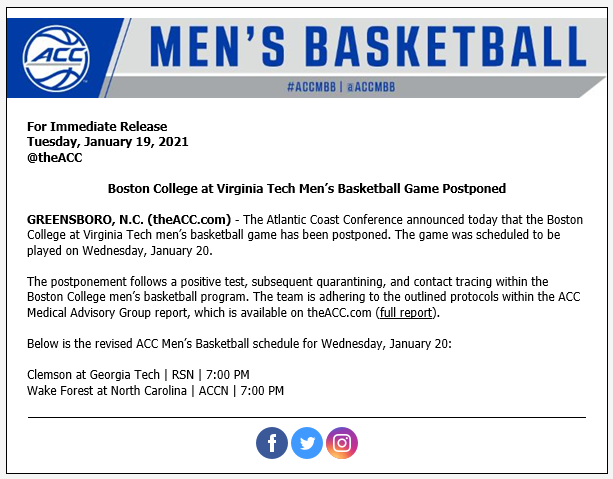 The Hokies escaped with a win on Sunday against Wake Forest, 64-60, despite struggling in many aspects of the game. Tech was outrebounded on both ends of the floor, turned the ball over 15 times and struggled defensively in the second half, but still found a way to get its first road win of the year.

It didn’t help that the Hokies’ top-two scorers both had an off night in Winston-Salem. Keve Aluma and Jalen Cone combined for just five points and made one shot from the floor. Aluma was averaging over 15 points per game entering Sunday, and Cone was scoring over 17 points per night over his last six games before traveling to Wake Forest.

It took a big performance from Tyrece Radford for the second straight game to put the Hokies over the top. Radford followed up an 18-point, 12-rebound double-double with a 20-point night against Wake. His accomplishments were good enough to earn ACC Co-Player of the Week honors along with Pittsburgh’s Justin Champagnie.

Tech hopes that its two leading scorers will have bounce-back performances offensively against an abysmal Eagles’ defense. BC is allowing over 78 points per game, good for 308th in the nation and worst in the ACC by far. Only 12 Division I teams are allowing a higher shooting percentage than the Eagles at 48%.

Boston College has had to rely on its offensive attack to try and stay in games, having scored 75 or more points seven times. However, the Eagles are just 2-5 in those games, including an 84-62 victory in their only ACC win against a beat-up Miami team.

Sophomore Jay Heath has been the focal point on the offensive end for BC all season, averaging 13.6 points per game. Heath is coming off of a big week, following up 25 points against Miami with 14 in the Eagles’ ten-point loss to Notre Dame on Saturday.

Heath made an impact against the Hokies as a freshman last year in both matchups. BC broke a five-game losing streak against VT with a sweep of last year’s season series. The six-foot-three guard from Washington D.C. added 15 points in Chestnut Hill before putting up 18 in Cassell Coliseum.

Heath is complemented by junior guard Wynston Tabbs who is also scoring over 13 points per game. Tabbs was a top-150 player out of high school, but missed 46 games in his first two years at BC. Now, he’s finally gotten healthy and has turned into a dangerous scorer for the Eagles. Tabbs has scored in double-figures in 10 of the 12 games he’s played this season.

Boston College doesn’t have much to celebrate early in the season, but those two have made a formidable duo in the backcourt. Expect Radford and Wabissa Bede to be shadowing them as the Hokies’ best two perimeter defenders. It looks like the Eagles are well on their way to their fifth losing season in six years under Head Coach Jim Christian. A loss at home to BC would not look good on the Hokies’ resume come Selection Sunday in early March.

Tech is looking for its sixth ACC win, which Mike Young’s squad didn’t reach until mid-February in his first year with the program. After Virginia’s game against NC State scheduled for Wednesday was postponed, a Hokies’ win would put Tech all alone in the conference at six victories (though UVA would still be atop the conference standings with a 5-0 record).

This is the second of four straight games against teams with sub-.500 conference records for the Hokies. After seeing the Eagles on Wednesday, Tech heads on the road to face Syracuse (1-3) on Saturday followed by a rematch with Notre Dame (1-5).