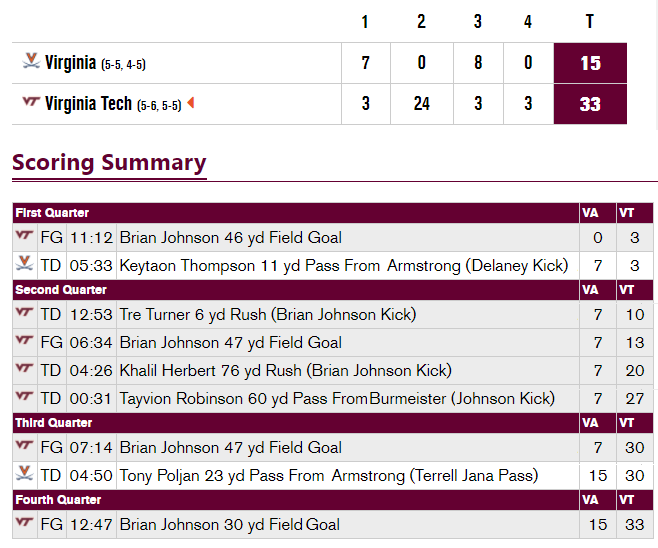 Divine Deablo is an ideal representative of Virginia Tech on and off the field, and a Hokie through and through. When deciding which senior would wear the No. 25 jersey on Saturday, it was really a no-brainer that the 6-foot-3, 226-pound safety would be given the honor for the fifth time in his career.

Early in the game, Deablo dropped a sure interception. It was only creating poetic justice for his game-sealing interception with 3:30 left, securing Virginia Tech’s 33-15 triumph over Virginia.

“Not to get too sentimental, but the good Lord made a beautiful person in Divine Deablo,” said an emotional Justin Fuente. “There’s not a better heart out there. Selfless, hard-working, intelligent, happy, pleasant. To see him go play like that and influence the game like that, kind of send him out. I can tell you it’s not just me that’s affected by him. That’s throughout that locker room. People are out there playing for him. Those type of people inspire you.”

Deablo was flying all over the field and delivering jarring hits all night long as one of the main contributors in helping return the Commonwealth Cup to Blacksburg, where it will make its residence for at least a year. Despite coming in losers of four straight and heading in the opposite direction from the Cavaliers who had won four in a row, the Hokies were the more complete team from start to finish.

“I see our kids every day,” Fuente said. “I know what they’re doing. I know how hard they’re working. I know how much they care. They know how I feel about them, too. This is a cool group. Again, you can talk about the record or the close losses or whatever, but the bottom line is through incredible adverse circumstances these kids stuck together and tried to play their tail off for each and for Virginia Tech.”

After falling behind 7-3 in the first quarter, it was all Hokies from that point forward, including 24 unanswered points in the second quarter. A Tre Turner jet sweep touchdown gave Virginia Tech a 10-7 lead it would never surrender.

Khalil Herbert delivered the first jab to send UVA staggering when he took a handoff 76 yards up the middle to the house in just six seconds to extend Virginia Tech’s lead to 20-7 with 4:26 left in the second quarter. Herbert concluded the game with 162 yards rushing on 20 carries. He’s averaging 7.7 yards per carry, a number that will become Virginia Tech’s all-time record holder at season’s end, eclipsing a record set in 1999 by Andre Kendrick (6.26 yards per carry).

“There was just a lot of daylight,” Herbert said. “Guys up front did a great job opening up a big hole for me to run through. I promised the guys I wouldn’t get caught again from that BC game… I was just thinking ‘get in the end zone.’”

“I just know he hasn’t gotten caught very many times in those situations this year,” Fuente said. “It was really nice this year to have someone who can finish those off. We’ve talked multiple times about making the unblocked hat miss or finishing a long run and he was able to do that on multiple occasions.”

If Herbert’s score made UVA woozy, the long touchdown to Tayvion Robinson before the half qualified as a knockdown. Facing a similar situation to last week against Clemson at the end of the half, this time Fuente and Co. decided to air it out and go for a score.

After Herbert picked up a hard-earned first down on third-and-4, Braxton Burmeister found Robinson for a seemingly short completion out along the sideline. That was until Robinson made one man miss and burst down the sideline for the 60-yard touchdown with 0:31 remaining before halftime.

“That was huge,” Fuente said. “Really, I don’t think the route should have been open in the coverage, but Braxton was able to hold the ball a little bit longer than normal. Braxton kind of slid over there and found Tayvion. He finally got in the end zone. You think about in Tayvion’s short career here how many times he’s had those big plays and always gone down at the 4-yard line or the 3-yard line. He finally got all the way in and it was a huge bonus play, to be honest with you.”

It concluded a highly efficient first half for Burmeister who got the nod as the starting quarterback in the game. Burmeister took over for Hendon Hooker against Clemson before being knocked out in the second half with an injury.

While both quarterbacks were available tonight, Fuente decided to call upon Burmeister to run the offense. The California native proved it to be a smart decision, tossing for 212 yards on 15-of-22 passing. Burmeister picked up 36 yards on the ground and was not sacked.

“Every snap I felt I knew what I was looking at and I felt comfortable with what they were doing, what we were doing,” Burmeister said. “I knew where the ball was supposed to be. It was pretty easy tonight.”

Virginia Tech’s defense continued to put on a masterful performance in the second half. With Virginia in desperation mode, Justin Hamilton’s unit was able to pin its ears back and play aggressively.

The Hokies harassed Brennan Armstrong for most of the night, recording four sacks and three additional quarterback hurries. Armstrong ended Saturday’s contest 25-of-46 for 259 yards, two touchdowns, and two interceptions. Most impressively, Virginia Tech surrendered a mere 55 yards on the ground.

“Me personally and the defense as a whole, this was probably our best game,” said Deablo, who collected six tackles, tied for the team-high with Amare Barno.

It remains to be seen whether or not Virginia Tech will participate in a bowl game this year. Fuente noted that he will talk with the team tomorrow to hear out all the players’ opinions. However, it’s worth noting that all five players available for postgame media voted ‘yes’ to participating in a bowl game if given the opportunity.

In the meantime, the Hokies can bask in glory of winning 20 of the last 22 in the rivalry. It was a fulfilled prophecy on Saturday night that was spent over a year in the making.

– The biggest storyline remaining for Virginia Tech this calendar year remains the future of head coach Justin Fuente. With the buyout dropping down from $12.5 million to $10 million on December 15, some decisions could be made shortly in the next few days.

“I don’t concern myself with anybody other than a small group of people,” Fuente said. “And that is the players, that’s the coaches, that’s the staff, that’s my family, and that’s God. I sleep really well at night if I’m in line with those people.

“The biggest thing for this is a sigh of relief that the regular season is over. Win, lose, whatever, this thing is a wrap, and that is a huge relief. I wish I was a better orator to describe to you how difficult it’s been. The strain and the stress on everybody has just been remarkable. I’ve had 11 conversations at midfield [with opposing coaches] and they’ve all been the same before the game. Just the hardest thing anybody has ever pulled off.”

By all indications, the current players hold Fuente in high esteem.

“I love Fuente,” Deablo said. “He’s just a people person. I love being around him. I’d do anything for the guy. I think I came in with Fuente. I was a Beamer recruit, but came in with Fuente and every step of the way he’s had my back.”

– It appears Khalil Herbert’s career at Virginia Tech may be done and the NFL could soon be calling his name, but he wasn’t going to make any guarantees on Saturday night.

– Dorian Strong had another standout performance, with his first career interception and five tackles. Strong has been the most impressive true freshman in the 2020 season for the Hokies.

“I’ve been really pleased with Dorian,” Fuente said. “He’s a young player who has no conscience. He just goes out there and plays.” 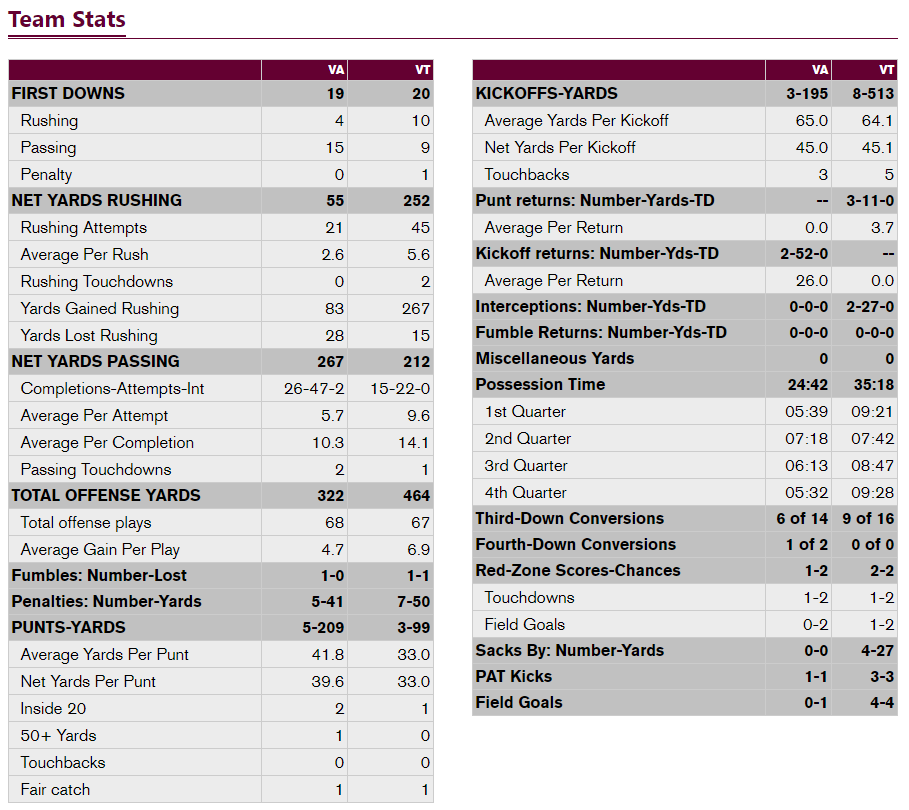 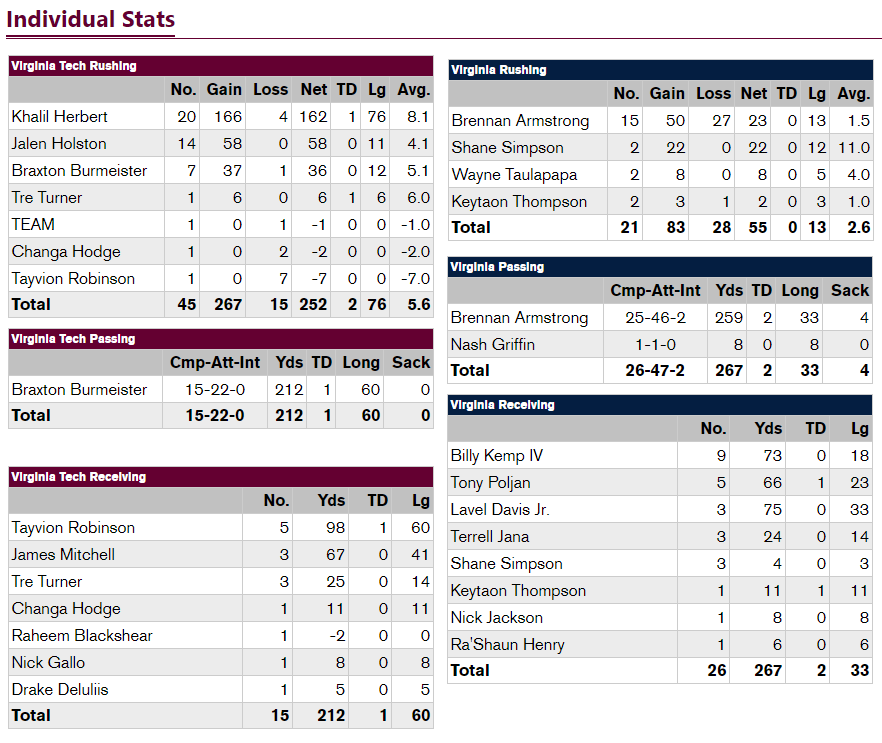 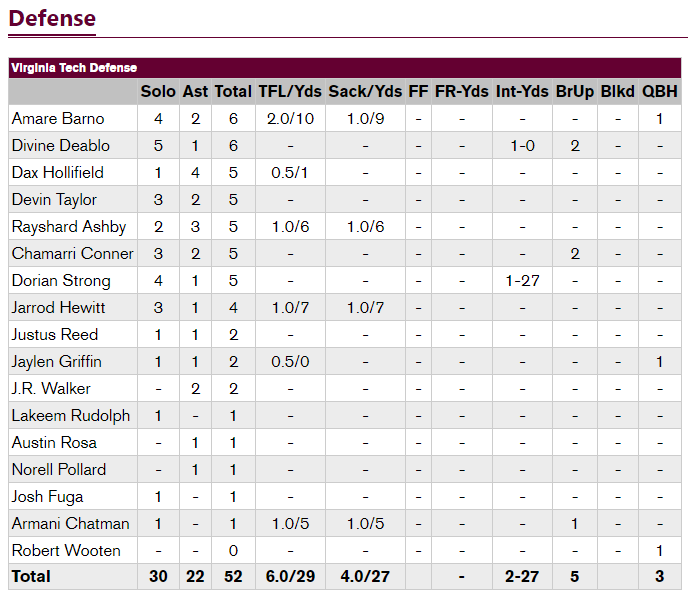