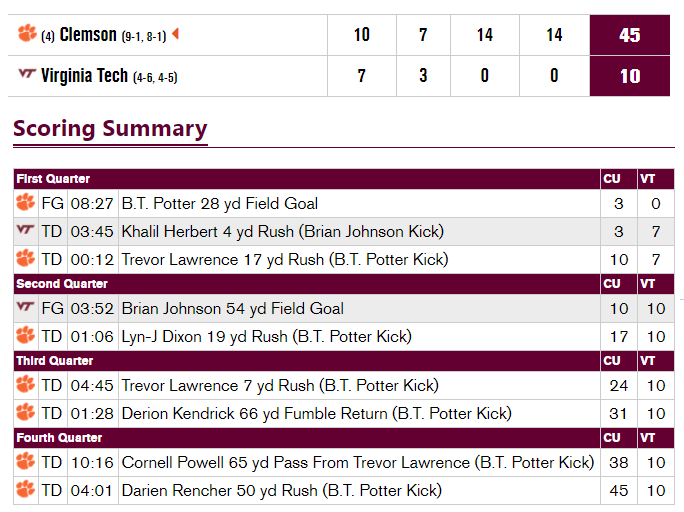 Blacksburg, VA — There’s a reason Clemson is No. 3 in the country and a major contender in the College Football Playoff. The Tigers are big, fast, strong, and physical with an uber-talented quarterback.

In order to beat a complete team like Clemson, the opponent needs to play a nearly flawless game. On Saturday night from Lane Stadium, Virginia Tech was competitive early, slowing the tempo down and even controlling time of possession 19:53 to 10:07 in the first half. However, the Hokies were far from perfect, falling 45-10 to the Tigers in a game that got out of hand late.

“Obviously our plan was to try to keep our defense off the field and try to hold the ball as long as humanly possible,” head coach Justin Fuente said. “That didn’t mean going into the game that we couldn’t or wouldn’t try to throw the ball, it just meant we were trying to limit the number of possessions. When you play it like that, you have a chance for it to go a bunch of different ways. I thought that was the best chance for us to win. I still believe that.”

Here are the five plays or sequences that changed the complexion of the game.

Through the first quarter of the game, Virginia Tech held its own and even led the mighty Tigers. After holding Clemson to a field goal on its first drive, the Hokies drove to take the lead with Braxton Burmeister as the quarterback.

The big play of the drive was a 48-yard connection from Burmeister to Tayvion Robinson, setting up the 4-yard touchdown by Khalil Herbert to go ahead 7-3.

Trevor Lawrence and Co. easily marched down the field, grabbing the 10-7 lead on his 17-yard quarterback scamper with 0:12 left in the first quarter. The Hokies responded by moving the ball into Clemson territory, moving down to the 28-yard line. However, as the play was over, Brock Hoffman jumped on top of a Tigers’ defender, drawing a 15-yard personal foul penalty and losing the opportunity for the Hokies to collect at least a field goal on the drive.

Hoffman had another penalty later in the game that stalled a drive before he was pulled for Zachariah Hoyt.

“I thought they were unforced errors and you can’t have those when you play teams like this,” Fuente said. “I didn’t see either one, but he had two penalties. He’s probably not happy with me right now and I understand that, but we can’t do those things.”

Armani Chatman played stellar defense, jumping a route and baiting Lawrence into a bad decision. The 5-foot-11, 190-pound cornerback did everything right except secure the interception when Lawrence threw it right to him. The Hokies did force a punt on the drive and proceeded to tie the game at 10-10 behind Brian Johnson’s 54-yard field goal, but Chatman’s dropped interception would have put Virginia Tech right in scoring position with a chance to go ahead with a touchdown.

It was the theme of the night for Virginia Tech with minor mistakes and missed opportunities that cost the team.

“Everybody is just battling right now,” tight end James Mitchell said. “It’s tough with the way things are going. Guys got deflated because we made some mistakes that we can’t make against a team like that. For a long time we were right there.”

End of First Half Sequence

Clemson regained the lead for good with Lyn-J Dixon’s 19-yard rushing touchdown with 1:06 left on the first-half clock. After Herbert returned the kickoff to the 33-yard line with 55 seconds to go, Fuente and his staff, with three timeouts left, went extremely conservative on offense.

Herbert rushed for four yards, and then Tech ran the play clock all the way down before he busted off a 21-yard gain. Virginia Tech then called timeout, and with two seconds remaining, Burmeister heaved a Hail Mary that was batted by a Clemson defender right into the arms of Raheem Blackshear near the goal line. However, Blackshear couldn’t reach the ball out and was stopped just inches short of a touchdown.

The Hokies entered the half trailing 17-10, but many were left wondering why a better attempt wasn’t made at tying the game before heading into the locker room.

“They had three timeouts also,” Fuente said. “They just ran through us like we weren’t even out there. My first thought was do not roll our tails out there with three incompletions and give them the ball right back. We ran the ball, busted one run, and took a chance to throw it in the end zone. I’d do it again playing these guys. Now if we were playing somebody else in a different situation, you can play it a bunch of different ways.

“When you watch those guys and they’ve got their timeouts, the first thing is not having your defense have to take the field again with Trevor Lawrence and all that comes with that. We ran the ball, popped one out, and took a shot in the end zone.”

After three-and-outs by both teams to start the second half, Clemson seemed poised to put the game away on its next possession. 11 plays later, the Tigers got it down to a third-and-goal from the 8-yard line. This time Virginia Tech’s defense made the play when presented the opportunity.

Divine Deablo stepped in front of Lawrence’s pass to the end zone and picked it off for the touchback, keeping it a one-score game.

“This game I was focused on disguising because I feel like [Lawrence] didn’t get a lot of that,” Deablo said. “My job was just to hit the post. I read his eyes and I saw the pick coming right behind the back of the end zone. I just made the play.”

The next possession was doomed for the Hokies. An illegal chop block from Hoffman moved the ball from the 20 back to the 10, and then Burmeister fumbled on the ensuing rush. Clemson recovered and two plays later Lawrence carried it into the end zone for his second rushing touchdown and a 24-10 advantage.

On the next drive, Burmeister got sacked on third down for a three-and-out. The redshirt junior quarterback did not return to the game and finished 10-of-12 passing for 127 yards.

“Braxton got knocked out of the game,” Fuente said. “He got injured and couldn’t go back in.”

Following a 7-yard shanked punt by Clemson, Virginia Tech took over just 32 yards away from making it a one-score game once again with 2:21 left in the third. Instead, it just set the scene for the knockout blow.

Hooker returned to the game for the first time since the opening series. The Greensboro native again fumbled the snap just like he did in that first drive. This time Clemson’s Derion Kendrick recovered the loose ball and returned it 66 yards for a touchdown.

“He’s had some issues in the past with catching the snap which is kind of an odd thing for him,” Fuente said. “He’s got great height and coordination and big ole strong hands. He was a good basketball player, but occasionally he has had some issues with that.”

Something appeared off with Hooker on the sideline following the fumble. He was actively shivering and hunched over. When the Hokies got the ball back, quarterback Knox Kadum was sent onto the field.

“We were going to put [Hooker] back in and the trainer came to me and told me that he was cold,” Fuente said. “I don’t know if there’s something more significant or serious or what with that. I’ve never seen that before or heard that before. I don’t know any more than that.”

Clemson added two late touchdowns to bring the score to the final score of 45-10. It leaves Virginia Tech with its second four game losing streak in the past three years. All that’s left on the schedule at this point is a home game next Saturday against Virginia.

“It’s Virginia, so that says it for itself,” said Herbert who finished the game with 96 rushing yards and a touchdown. “Guys are already ready for that. I don’t really think we really have to get everybody up. That’s a game that everybody gets up for.”

Just last week, Knox Kadum was the fourth string quarterback for the Hokies. Following Burmeister and Hooker’s exit from the game and Quincy Patterson’s entry into the transfer portal earlier in the week, Kadum was pushed into action for the first time in his career against No. 3 Clemson.

“I ran scout team this week,” Kadum said. “Was doing everything to help the defense. Last night I met with a bunch of our coaches and GA’s. We went over the game plan, what we were going to do, everything. Got it down as best as I could. My job was to be ready if my number was called. That’s kind of what happened. It was very unlikely, but that’s how it went tonight.”

“It’s an immense challenge,” Fuente said. “The thing about Knox is he’s a competitor. I’m sure he was nervous, but he went out there and competed. I am proud of him. We saw something in Knox in high school. He’s still developing obviously. I think as he continues to work and get better, he’s got a chance to be productive Division I quarterback here at Virginia Tech.”

“Definitely coming into the year, it was one of my personal goals,” Herbert said. “It was definitely something I wanted to accomplish.”

So where do Fuente and the program stand following this loss that marks the first losing regular season since 1992?

“I’m not going to tell you I feel great, we just lost,” Fuente said. “I feel great about what we’re doing and where we’re going. The context of the season, you guys know. You don’t need to see me whining up here to know about that. I feel great. It’s time for us to get ready for Virginia.” 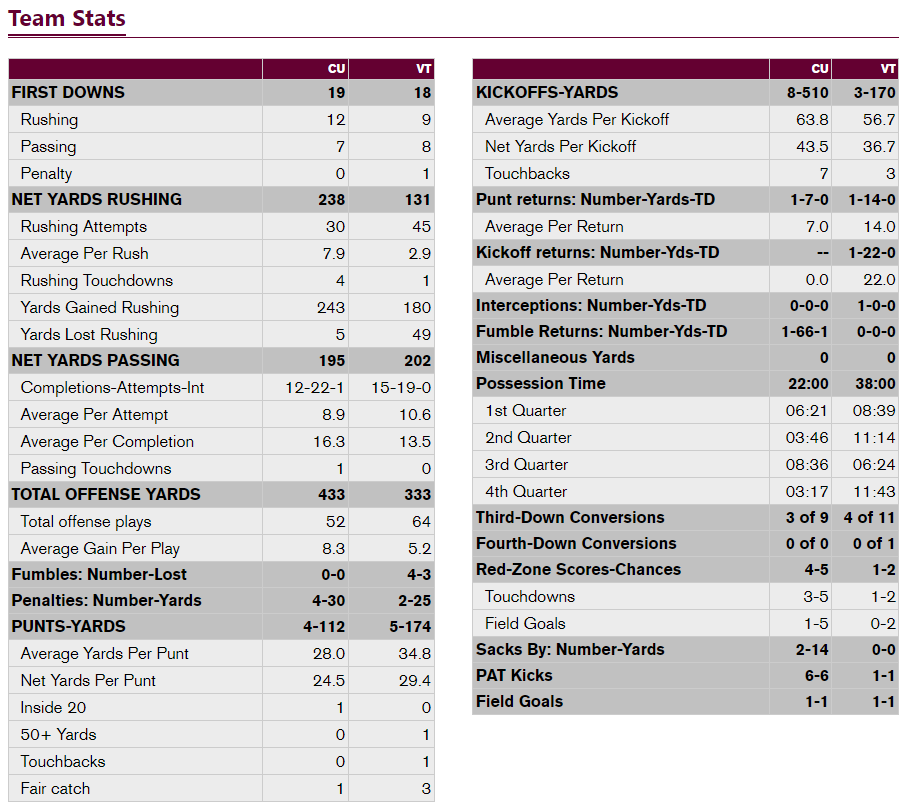 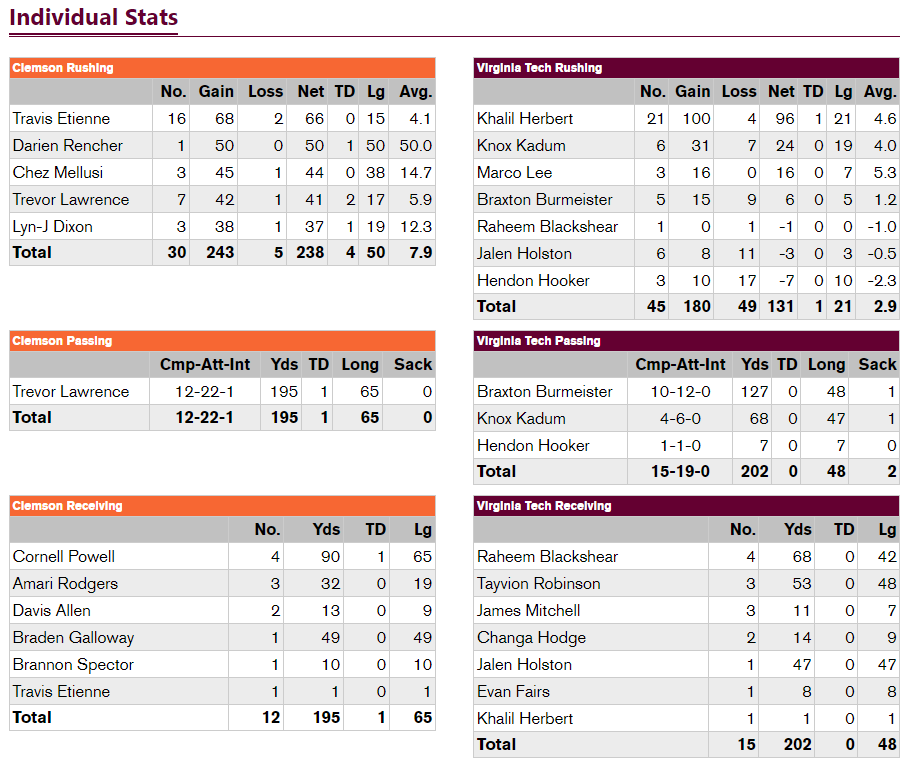 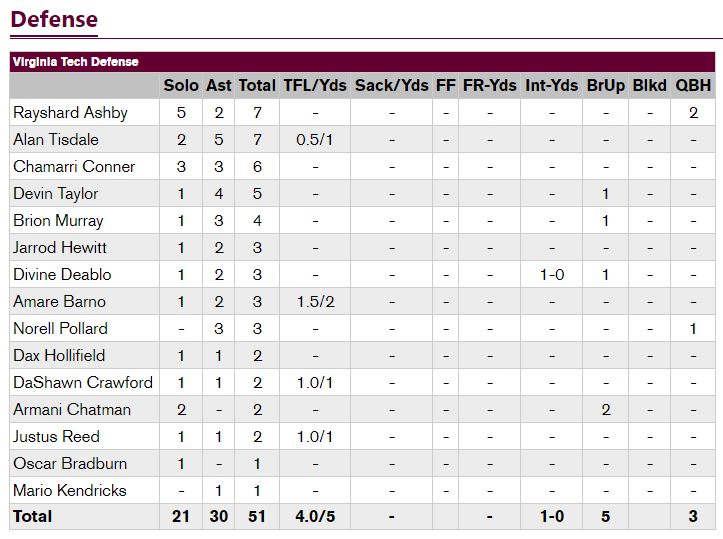