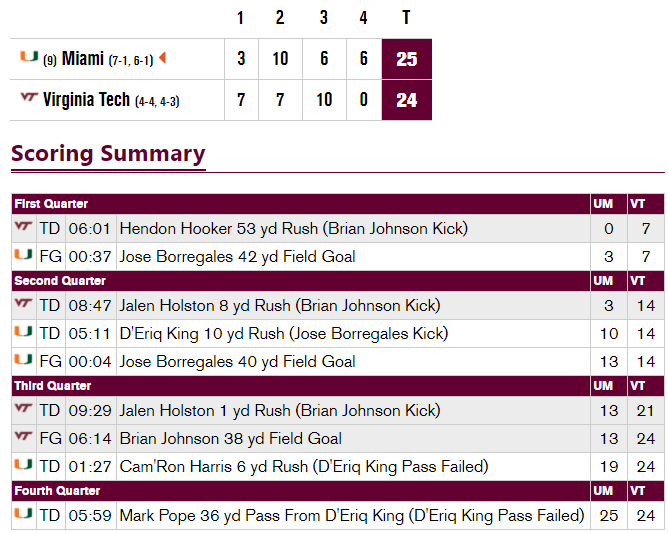 Justin Fuente has never beaten a top 10 team in his tenure at Virginia Tech. The Hokies were on the verge Saturday afternoon against No. 9 Miami, and led for 45 minutes of game action before surrendering a 36-yard strike from D’Eriq King to Mark Pope to give the Hurricanes the 25-24 lead with 5:59 remaining.

In the end, the elusive top 10 victory wasn’t meant to be. From there, Miami (7-1) preserved the lead and handed Virginia Tech (4-4) its third loss in the last four games.

“I just told our football team I feel better about our football team now than I have at any point,” Fuente said. “To stand up to all the stuff they dealt with this week after what happened last week. To prepare like they prepared and to play a team as deep and as talented and as highly ranked as Miami. Again, we’re not happy with not winning the ball game. My gosh, did our guys lay it on the line today. So many great examples on both sides of the ball of guys who refused to give in to negativity, refused to give in to all the things that are out there.”

“Nobody likes losing here,” said Jarrod Hewitt, who finished with a team high 2.5 sacks. “Everyone is pretty upset. The thing is I’m proud of my guys. Coach Fuente kind of echoed that talking about how proud he was of our preparation this week and coming out against a really good football team and giving it our all. It really came down to the wire. It doesn’t feel good. I’ll tell you that. Proud of my guys. Love every one of them and love this program.”

After a competitive first half that saw the Hokies enter the locker room with a 14-13 lead behind a Hendon Hooker 53-yard rushing touchdown and a Jalen Holston 8-yard run, the Hokies came out storming in the second half. In the first two defensive series of the second half, Justin Hamilton’s unit limited King and Co. to minus-7 yards on seven plays. In between those series, Virginia Tech extended its advantage to double digits with another Holston touchdown and a Brian Johnson 38-yard field goal.

With 6:14 left in the third quarter and holding on to a 24-13 lead, it was the last time the Hokies would put up any points on the board. King immediately followed with a 13-play, 75-yard scoring drive to cut the lead to 24-19.

Hooker responded with positive momentum that was quickly snuffed out. Facing a third-and-6 from Miami’s 37-yard line, the play call was designed for a Hooker QB power run to the outside. The Hurricanes were on it all the way and stopped Hooker behind the line of scrimmage, forcing a punt.

“We wanted to get into fourth-and-short so we could run it again on fourth down, but we didn’t,” Fuente said. “We were treating third down like second down and we didn’t get hardly anything, so now we’re in fourth-and-seven. We punted the ball and downed it on the 5-yard line and the defense went out and got a stop. Just a long, long field goal. We missed one earlier and our thought is on our third down to try to get it to fourth and manageable.”

The Hokies defense stood tall again and forced a three-and-out. However, Miami’s defense returned the favor, forcing a three-and-out of their own. With the ball back, the up-tempo Hurricanes offense marched right down the field and connected on the decisive touchdown with a 36-yard pass from King to Mark Pope.

“It was a deep skinny,” Fuente said of Miami’s go-ahead touchdown, the only play the ‘Canes had all day that went for over 20 yards. “They had gone to it several times during the game. You can play inside leverage and be in a bad position for a fade, or you can play outside and have to rally to the skinny. They’d thrown it several times and we defended it some. Got a step on us.”

Virginia Tech’s next possession lasted just one play. Hooker looked deep for Kaleb Smith, but he overshot him and Miami’s Te’Cory Couch hauled in the interception.

“Just a miscue,” Hooker said. “Receiver is thinking one thing, I’m thinking another. It happens.”

The Hokies got the ball back again with 4:04 remaining, but Miami continued to ramp up the pressure. After a first down, Hooker was sacked for a loss, putting Virginia Tech behind the chains.

It was a consistent theme for Miami’s defense, especially in the second half. By playing press man coverage on the outside, the Hurricanes’ defense was able to bring more pressure and tallied 6.0 sacks, including 2.5 from Jaelan Phillips.

“Just kind of waiting for different windows and different plays to develop,” Hooker said of the constant pressure he was under. “Just trying to be alert with the pressure on me and trying to move around. Trying to get my feet set. The pressure did affect it a little bit. That’s football. I’m still supposed to make the plays.”

Following a punt with 2:13 left in the game, Virginia Tech’s defense again made a stop. A week after the Hokies had no answer for Liberty’s offense, the defense put in its best effort of the season. King exploded for over 500 total yards last week against NC State, but he was limited to 255 passing yards and just 15 rushing yards against Virginia Tech. The Hokies allowed a meager 2.7 yards per carry and notched six sacks on the day.

“I was pleased with the way we played defense the whole game,” Fuente said. “That is an explosive, dangerous unit, and we threw the kitchen sink at them. Our guys executed pretty well. We defended in the back end against some pretty explosive players. I thought the guys played their tails off.”

With one final offensive possession, the two-minute drill that had looked so efficient against Liberty was in disarray. Virginia Tech was again undone by Miami’s pressure. A last ditch lateral play never stood a chance, and the Hurricanes escaped from Blacksburg with a victory.

“I think it was a little different cats,” Fuente said of running the two-minute offense against Miami. “That’s a little bit different deal. These guys are blitzing from everywhere. They’re athletic, they can rush the passer. The last week in two minute offense [Liberty] just stood still. Totally different animal out there today.”

Virginia Tech finds itself backed into a corner again. Much can be made about a better effort and the heart from the players, but the result remains the same. It’s a result that can only hope to be changed on the road next week against Pittsburgh (4-4, 3-4 ACC).

“You don’t get over it in an hour and you forget about it,” Hewitt said. “These kinds of things hurt a little bit. As this next week comes about, we’ve got to lock back in. We have Pitt. They’re a good football team. Historically, Virginia Tech has not done well in that stadium. We’re going to have to have the right mindset. We’re going to have to be ready to go play again and fill up the tank and be ready to empty it next Saturday.”

Khalil Herbert returned to action on a limited basis after missing nearly the entire game versus Liberty with a hamstring injury. In his return, Herbert carried the ball eight times for 49 yards.

“He said he felt good,” Fuente said. “He’s a really positive kid, though. He started to work in and get a little more work each day. I really was pretty conscientious about trying not to set him backwards is the biggest thing. He’s got a big, strong hamstring and you can imagine when you start to get issues with that, they can linger on for weeks and months if you’re not careful with it.”

“Today I felt pretty great,” Herbert said. “I was just going to go out there and cut it loose and lay it on the line for the team.”

Jalen Holston had his best performance in a Virginia Tech uniform. The redshirt junior was stout in pass protection and notched two touchdowns to go along with 36 yards on the ground.

Dax Hollifield broke out in a big way with a team-high 13 tackles and two half-sacks. Rayshard Ashby and Devin Taylor both added 11 tackles. 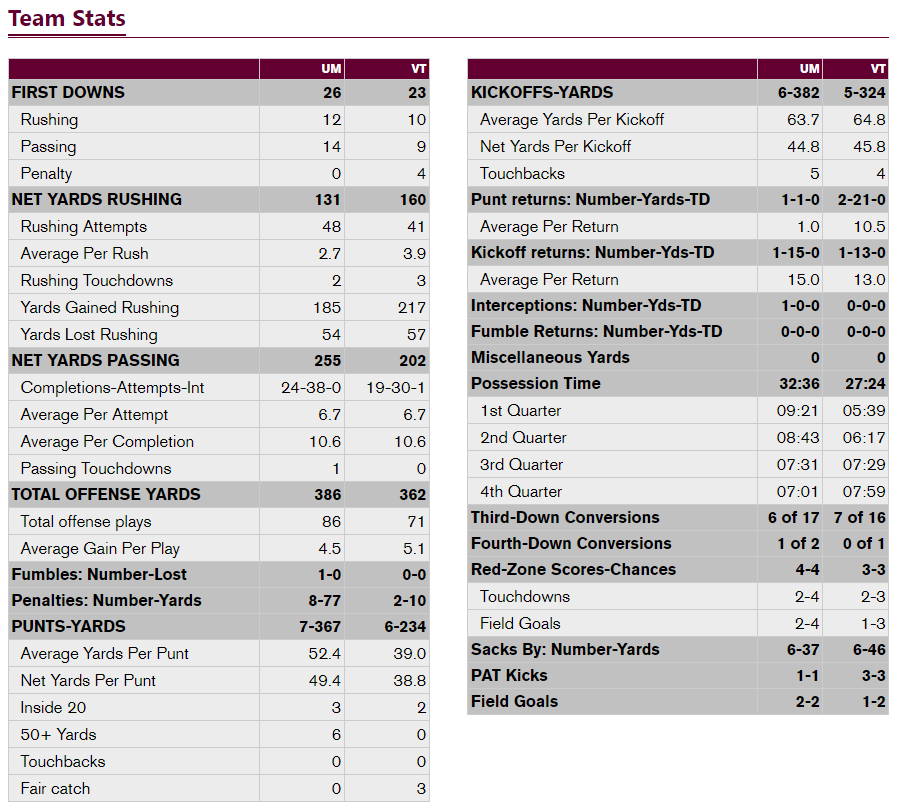 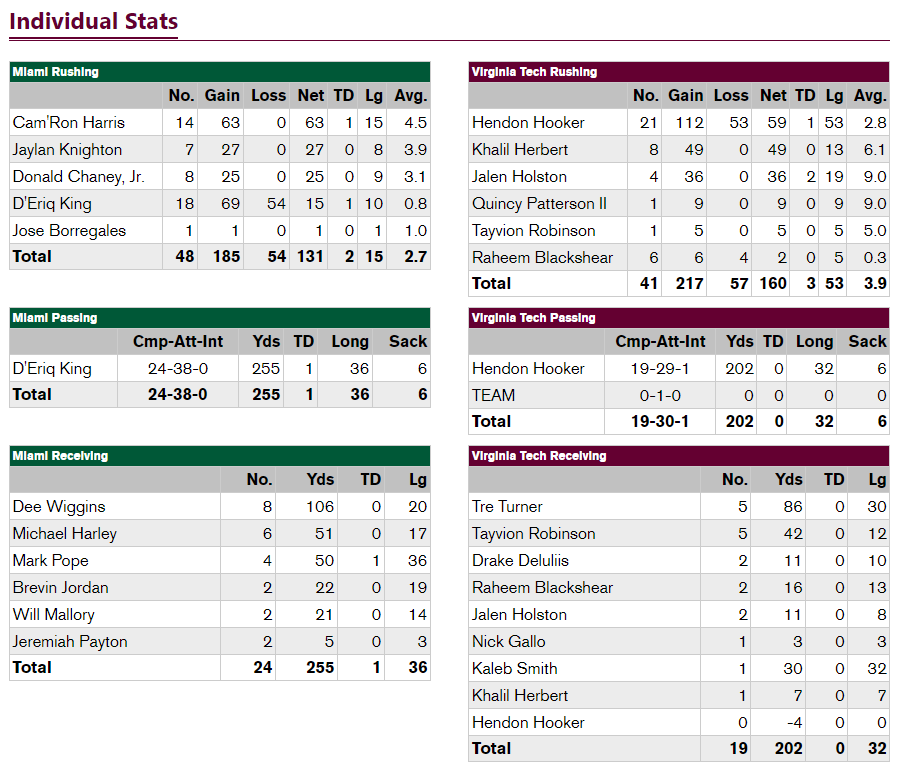 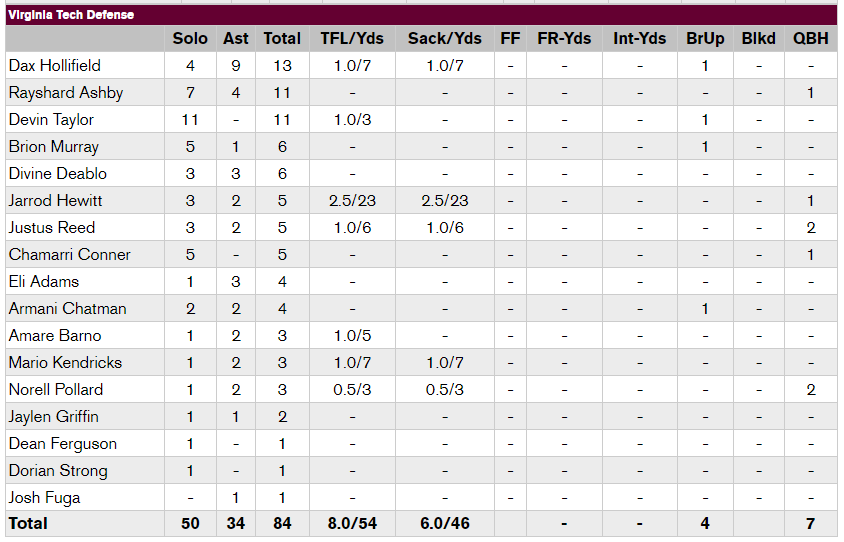