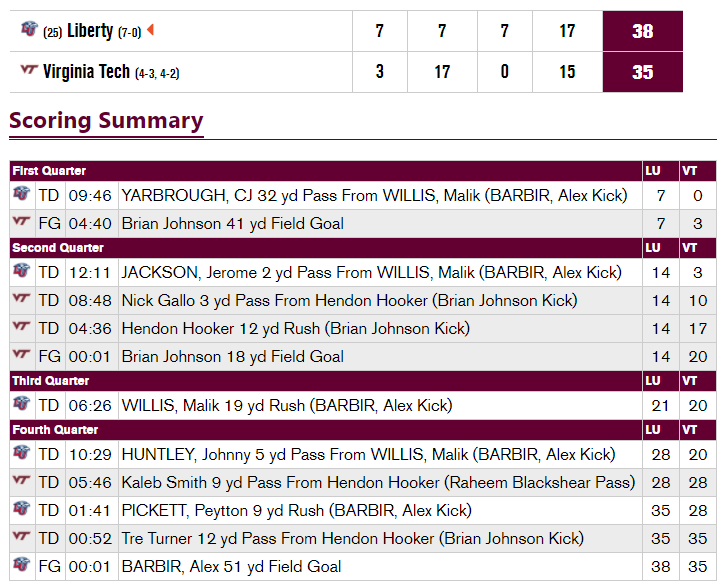 It was pure exhilaration for a few brief moments. Virginia Tech had blocked Liberty’s 59-yard field goal attempt from Alex Barbir, and Jermaine Waller scooped the loose ball, returning it for the game-winning touchdown as time expired.

The Hokies would escape the scare from the Flames and walk out of Lane Stadium with an ugly victory. Only they didn’t. Instead, head coach Justin Fuente had called a timeout right before the snap, with eight seconds left.

“I’ve always done this,” Fuente said. “I don’t believe in waiting for the last second to call timeout in those situations because I don’t ever like letting the kicker get a free swing out of it. I hollered ‘timeout.’ I guess I waited too long. That’s what I told the team. It’s on me.

“I said ‘timeout.’ Didn’t hear me and I screamed ‘timeout.’ The refs blew the whistle. They snapped the ball and we blocked it. Obviously, it didn’t count. It’s pretty crushing. I told our football team I was really proud of the way they played situational football there at the end. Told them I may never get over it. Really wish I hadn’t called timeout.”

Those final few seconds were ravaged with questionable calls from the Hokies’ coaching staff, including that costly timeout. The biggest gripe with it is why a college kicker needed to be iced on a 59-yarder in the first place, especially when Barbir came into the game just 2-of-6 beyond 30 yards with a long of 42 yards. Fuente explained that it had nothing to do with actually icing the kicker.

“It’s more about making sure you’ve got the right guys out there to go execute the block,” Fuente said. “I don’t know about the whole icing the kicker thing. Whether it’s 59 yards, 51 yards or 21 yards, you call a timeout to make sure you get everything straightened out. I called it too late. It’s on me.”

The sound of the officials’ whistle was drowned out by the excitement on the field. The entire kick, block, and return was all played out before everyone came to the realization that the timeout had indeed been granted.

“I did not hear the whistle blown and I thought we had won the game,” said Divine Deablo, who was on the kick block unit. “I was looking for the ball and saw Maine (Jermaine Waller) running with it. I thought that was the end of the game right there.”

Following the rollercoaster of emotions that took place over the few previous moments, Liberty was still facing a fourth-and-6 from Virginia Tech’s 41-yard line with eight seconds remaining. After the near disaster, there was no chance that Hugh Freeze was going to send his kicking unit back out again. Instead, the Flames’ offense took the field.

A confused Virginia Tech defense dropped back in prevent coverage, with over 15 yards of separation between the cornerbacks and the receivers. As a result, Liberty’s Malik Willis dumped off an 8-yard out route to CJ Yarbrough to get the first down and create a shorter field goal attempt that Barbir nailed.

“Well, it was pretty difficult to get everyone back out there is the first problem,” Fuente said. “Once you get the [Liberty] offense taking the field, not the field goal team. Trying to protect the end zone and they threw it underneath us.”

“We thought they were running a Hail Mary,” Deablo said. “We got our victory team on the field and their coach made a good play call and just ran a 5-yard out. That put them in better position.”

The Hokies were fortunate to find themselves with an opportunity to send the game to overtime in the first place.

“I felt like the quarterback is just an added dimension of athleticism and strength,” Fuente said. “I feel like it was a combination. I can remember one play in particular, it’s second-and-10 and the ball bounces to the unblocked hat and we don’t make the tackle and they get eight yards. And that wasn’t the quarterback, that was the tailback carrying the ball. That’s pretty hard if you’re right there and you can’t make the tackles. It was a combination of not making the plays when they were there. We have not tackled particularly well. We did not tackle particularly well today.”

Trailing 21-20 with 10:49 left in the fourth quarter, the Hokies were getting the ball back with a chance to take the lead. Instead, Tayvion Robinson muffed a punt inside the 10-yard line. Liberty recovered and Willis connected with Johnny Huntley for a wide open touchdown one play later to put the Flames up 28-20.

Hendon Hooker drove the offense right down the field and hit Kaleb Smith on a gutsy fourth-and-3 throw for the 9-yard touchdown with 5:46 remaining. The two-point conversion was successful and notched the game at 28 apiece.

“Kaleb Smith, me and him have conversations every weekend,” Hooker said. “He’s my roommate in the hotel. He says, ‘Hendon you know wherever you put it I’m going to catch it.’ I said, ‘Alright, it might be off, but I’m going to need you to catch them.’ It worked out in the end, him stepping up big.”

Still, Virginia Tech’s defense was no match for Willis and Company. Freeze’s offense found little resistance on the next drive, marching it down the field. It got to the point where the Hokies had exhausted all timeouts. Facing a first-and-goal from the 9, Fuente sent in the call to allow the touchdown on purpose. As it was drawn up, Peytton Pickett walked untouched into the end zone, giving Liberty a 35-28 lead with 1:41 left when he instead could have kneeled down before the goal line to run out the clock for a chip shot field goal.

“If you’re a real ballplayer, then you want those times,” Hooker said. “You want the ball in your hands at those times. Those times are just part of the game, as well as just building on a legacy with the offense. We drove down and scored and executed the way we practiced it.”

Hooker finished the game 20-of-27 passing for 217 yards and three touchdowns. He did his most damage with 156 rushing yards on 20 carries and one touchdown. But it was for naught.

Virginia Tech returns to ACC play by welcoming D’Eriq King and Miami to Blacksburg. Kickoff time is still to be determined.

“It’s a tough one and it’s a tough situation,” Hooker said. “We just have to bounce back from it.” 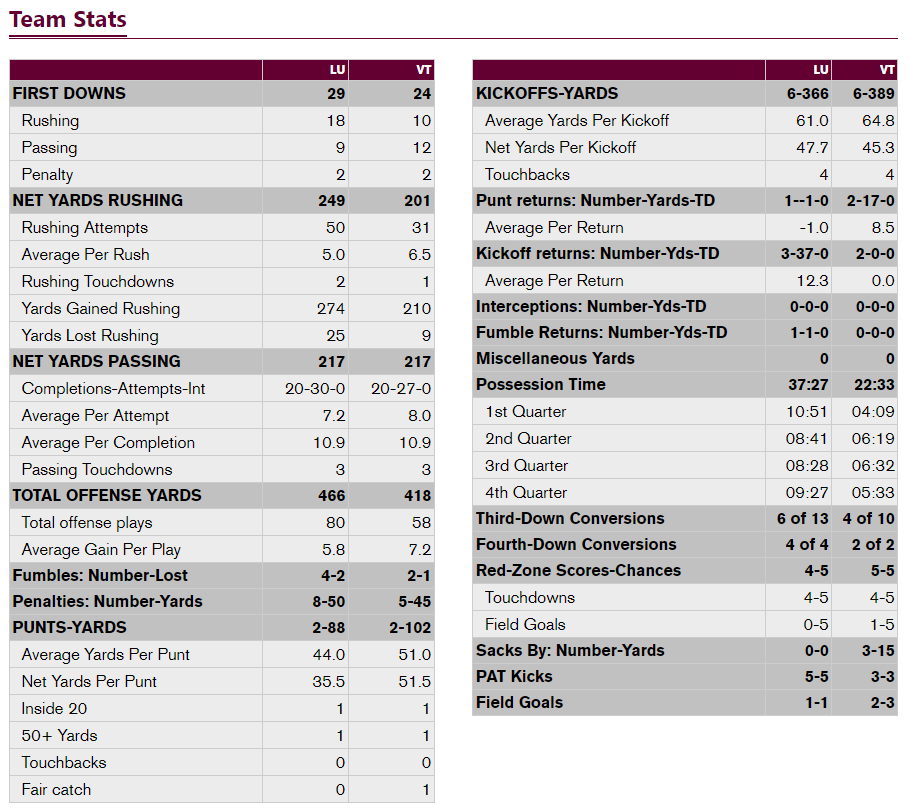 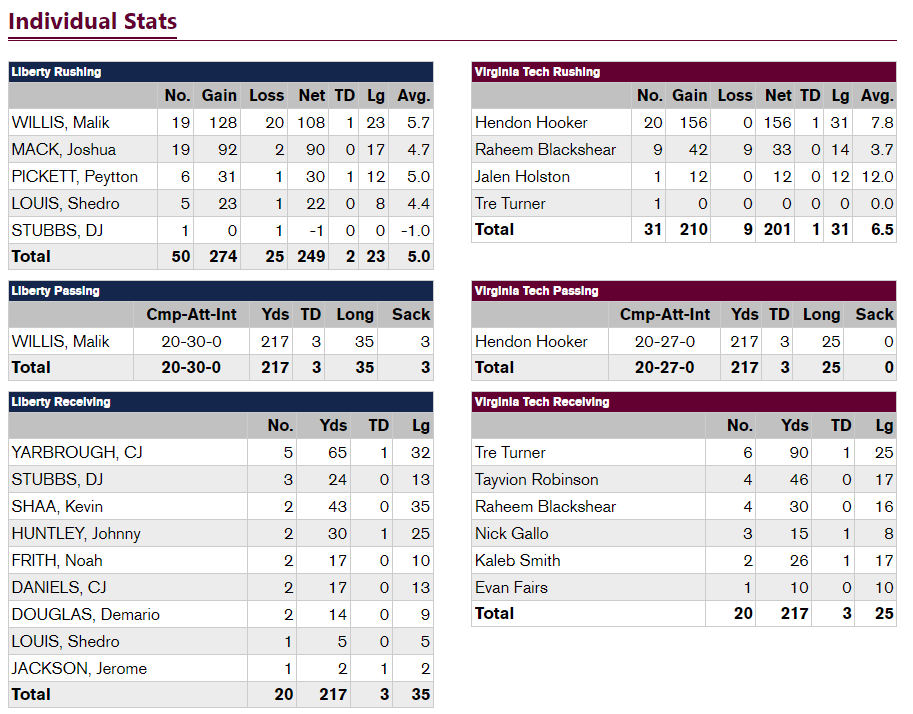 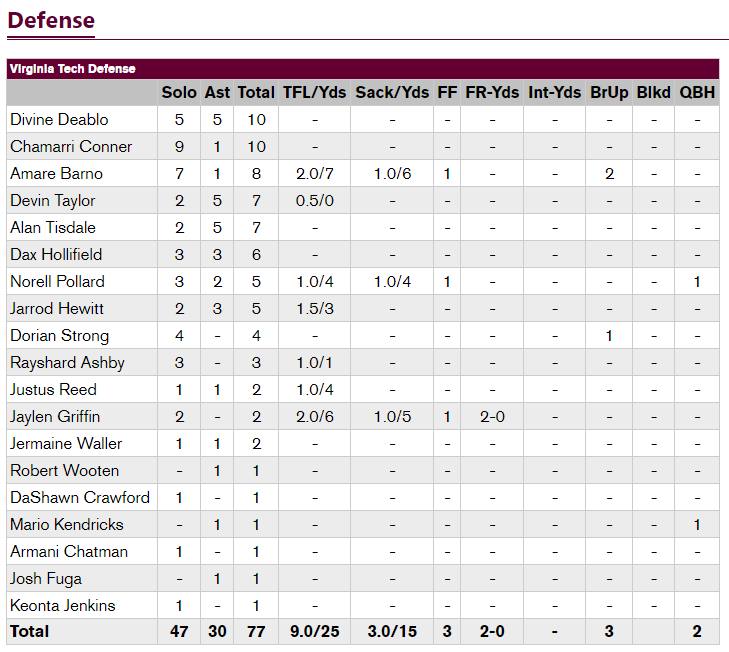