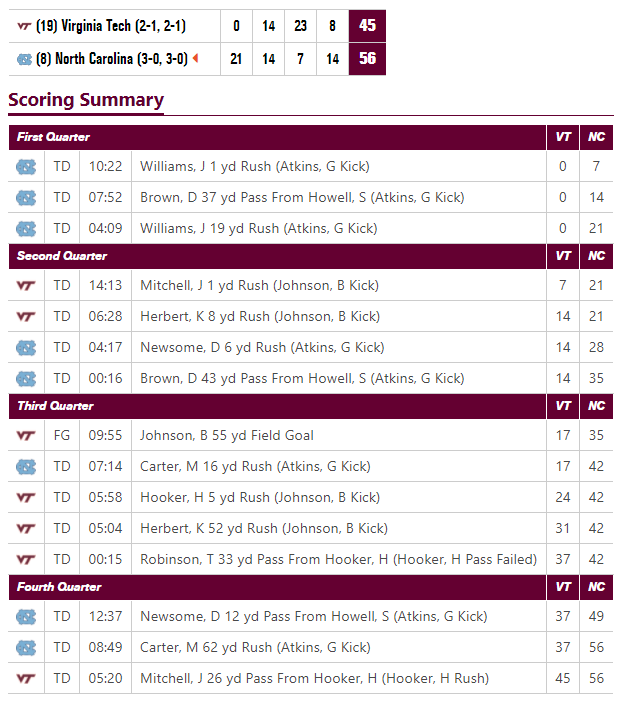 Chapel Hill, NC – No. 8 North Carolina torched Virginia Tech for 656 yards and eight touchdowns on their way to beating No. 19 Virginia Tech 56-45 in Chapel Hill. The Heels took a 21-0 lead 11 minutes into the game and never trailed, though the Hokies were able to close it to 42-37 at the end of the third quarter.

Virginia Tech answered with 495 yards of offense, including 138 yards rushing by star tailback Khalil Herbert, but it wasn’t nearly enough. Braxton Burmeister started and played most of the first half but gave way to Hendon Hooker, who played all of the second half.

North Carolina was better positioned than Virginia Tech’s previous two opponents to take advantage of the Hokies’ depleted defense. At cornerback, Armani Chatman and Jermaine Waller returned to the starting lineup, but the Hokies were forced to start walk-on Tyler Matheny in place of Divine Deablo for a second straight game, and J.R. Walker made his first career start in place of Keonta Jenkins.

“It came down to we were drawing stuff of up just to get people in the game,” said Virginia Tech head coach Justin Fuente. “I’ve never been a part of anything like it in terms of having no safeties. We were better at corner this week, health-wise, but some of those guys hadn’t practiced and we couldn’t get anyone else in there to play safety, so we ended up putting [outside linebacker Alan] Tisdale in there. It’s just almost not even like football. It is what it is and that shouldn’t excuse everybody in the other spots for how they played. First of all, I’ll say this, North Carolina is explosive on offense. If you can’t fit the run game, you’re at their mercy and they can do whatever they want. We weren’t able to get it done down several people and it got pretty rough.”

The situation got even more complicated when starting nickel Chamarri Conner was ejected for targeting in the first quarter.

“You’ve got Deablo, Jenkins, Chamarri out,” Fuente said. “We lost [Nasir] Peoples in fall camp, [Devon] Hunter is out, and you’ve got Nadir [Thompson] going in there who’s been out all fall camp but played last week at corner. You throw him in there. Nyquee Hawkins has been out all fall camp. We couldn’t get the corners ready all week to go play safety because we didn’t have most of them.

“The worst thing a coach can do is get up here and give a bunch of excuses. It’s still our job to find a way to get the job done, but there comes a point where you don’t feel like you’re giving your guys a chance because there’s nobody left.”

The Heels averaged 9.9 yards per play and had 31 first downs.

Offensively, in addition to Herbert’s 138 yards and 7.7 yards per carry, the Hokies got 103 yards receiving from tight end James Mitchell, who had a 1-yard TD run and a 26-yard TD catch. The Hokies did not turn the ball over and committed just four penalties for 26 yards, including two unsportsmanlike penalties with one second left to go in the game.

The game got off to a very rough start for the Virginia Tech defense, which was shredded for three touchdown drives in the first 11 minutes. UNC drove 75 yards, 83 yards and 66 yards with the run and the pass, scoring on runs of 1 yard and 19 yards by Javonte Williams and a 37-yard TD catch by Dyami Brown.

The UNC scoring drives bracketed two three-and-outs by the Hokies, and with 4:09 to go first quarter, the Heels led 21-0 and had outgained the Hokies 239-14.

Over the course of the next 12:41 of the game, Virginia Tech’s offense woke up and the Hokies defense got a couple of stops. Tech scored two touchdowns on drives of 11 plays, 75 yards (1-yard TD run by James Mitchell) and 9 plays, 70 yards (8-yard run by Khalil Herbert), closing the gap to 21-14.

The second Virginia Tech touchdown happened with 6:28 to go in the first half, but the rest of the half wasn’t kind to the Hokies. UNC went on touchdown drives of 75 yards and 58 yards, sandwiched around a Virginia Tech turnover on downs, to take a 35-14 lead into the break.

UNC’s final touchdown of the first half was particularly painful for the Hokies. Down 28-14, Virginia Tech drove to the UNC side of the field and went for it on fourth and three from the North Carolina 42 with 1:14 to go. A slant pass from Burmeister to Tre Turner went incomplete, and the Heels took over with 1:11 left in the half. Four plays later, on first down at the Tech 43, Sam Howell hit Brown for a touchdown against single coverage by Jermaine Waller, in his first action of the season, with just 16 seconds left in the half.

At half time, UNC had 372 yards of offense and 17 first downs, to 190 and nine for the Hokies. Braxton Burmeister was 7-of-15 passing for 79 yards, and Burmeister had run 11 times for 51 yards, but Khalil Herbert, the nation’s leading rusher, had just six carries for 32 yards. Hendon Hooker had played just one series, a three-and-out.

In the second half, Virginia Tech offensive coordinator Brad Cornelsen handed the keys to Hooker and Herbert, and the Hokie offense fared much better, scoring 31 points and racking up 305 yards. The Hokie defense, unfortunately, couldn’t stop the North Carolina onslaught.

Virginia Tech started the second half with an apparent touchdown drive, as Hooker hit Turner for a 29-yard touchdown, but the Hokies where whistled for an illegal shift on the play.

“We moved a back while Tre was in motion,” Fuente said. “It was a good call. We all knew it was coming back as soon as it happened.”

The drive stalled, and Brian Johnson came on to hit a career-high 55-yard field goal to make it 35-17, Heels.

Virginia Tech was teetering, but the Hokies came to life and scored 20 unanswered points in the next 6:59:

That was quite the comeback by the Hokies, but from then on, it was all UNC. The Heels went 75 yards in six plays (Dazz Newsome, 12-yard TD catch), stopped the Hokies, and then went 78 yards in four plays (Michael Carter, 62-yard TD run) to go back up 56-37.

Virginia Tech responded with a 26-yard TD pass from Hooker to Mitchell. A two-point conversion made it 56-45, but the game ended with UNC in the victory formation inside the Virginia Tech ten-yard line.

Virginia Tech next plays Boston College on October 17 in Lane Stadium. The Eagles beat Pitt in overtime, 31-30, to go to 3-1. The game is at 8 PM on the ACC Network. 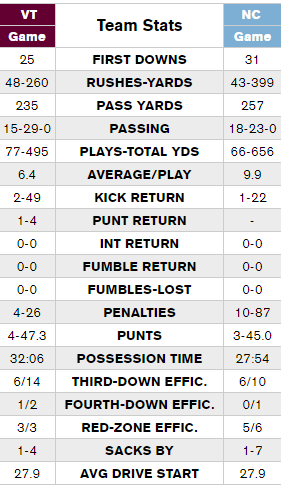 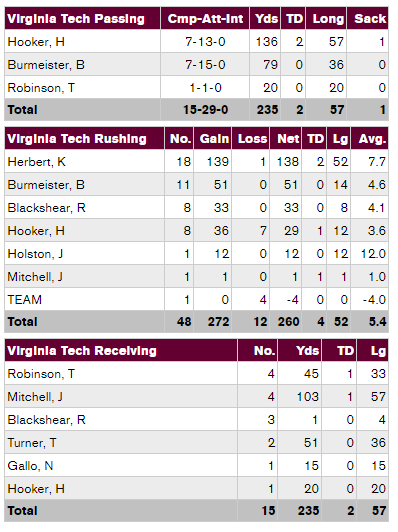 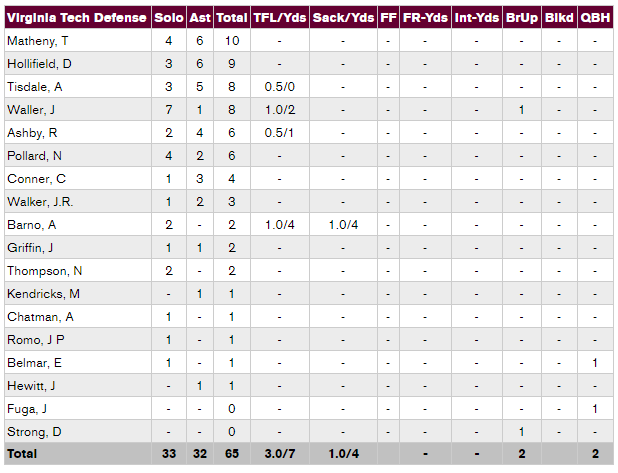