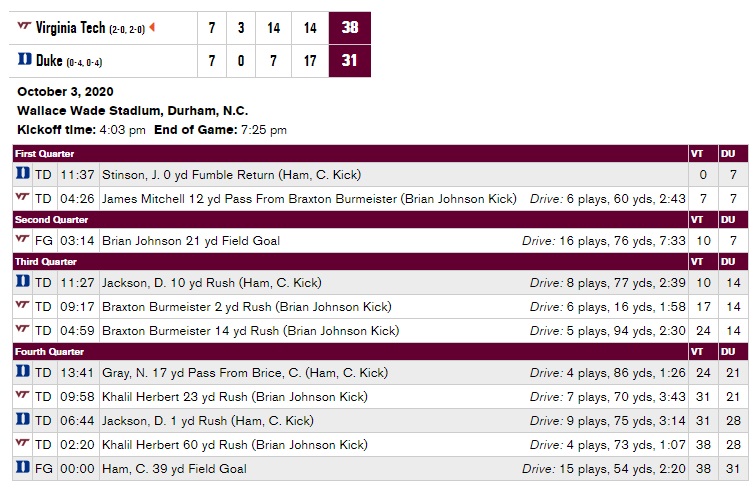 Virginia Tech football has made a name for itself in the past with difference makers at the running back position. The list includes all-time greats like Cyrus Lawrence, Lee Suggs, Kevin Jones, Ryan Williams, and David Wilson among others. Two games into his Hokies career, Khalil Herbert is making a case to become the next key playmaker from the tailback position for Virginia Tech.

“Khalil has been fantastic,” Virginia Tech head coach Justin Fuente said. “He’s just explosive and strong. He has good vision. He’s been really good for us.

“I’m just going to tell you guys, he’s as great a kid as you’re going to find, too. He’s polite and nice, just great family. Just a pleasure to have on this team.”

Seemingly every time the Blue Devils threatened, Herbert had a response. With Virginia Tech trailing 14-10 early in the third quarter after a Duke touchdown, Herbert returned the ensuing kickoff 83 yards to the 16-yard line. Six plays later, Braxton Burmeister punched it in from two yards out, giving the Hokies a lead they would never surrender.

“I was just trying to give the team a spark anyway I can,” Herbert said. “We have to make plays on special teams is one thing coach talked about all week.”

Late in the fourth quarter, Duke cut the lead to three points twice. Again, Herbert and the offensive line came to the rescue. Leading 24-21, Herbert capped off a 7-play, 70-yard drive all on the ground with a 23-yard touchdown.

With 3:21 remaining, Virginia Tech took over with a 31-28 advantage. From there, Herbert put the nail in the coffin with a 60-yard house call. The Hokies tallied 324 yards rushing, the second week in a row that the team has churned out over 300 yards on the ground after doing so just twice in all ACC games dating back to 2004.

While Herbert stole all the headlines, the work of Virginia Tech’s defense was the story early. Year after year, Bud Foster’s defensive unit put up Herculean efforts to bail out Virginia Tech’s offense and capture hard-earned victories. In the first half, it was an ode to the past as the Hokies utilized a depleted Lunch Pail Defense with no official defensive coordinator to keep the Blue Devils’ offense honest.

On top of that, the Hokies were missing 21 players for various reasons, including a vast majority of the secondary. Divine Deablo, Jermaine Waller, Armani Chatman, Brion Murray, Devin Taylor, and J.R. Walker all were unavailable, leaving redshirt sophomore Nadir Thompson, true freshmen Keonta Jenkins and Dorian Strong, and walk-on Tyler Matheny as starters in the defensive backfield.

“It was pretty late in the week and we were scrambling,” Fuente said, noting he found out on Thursday that many of his defensive backs would be unavailable.

“A majority of what we dealt with last week was all offensively… What really scares you is on the defensive side of the ball. When your numbers start to get low at a particular position, there’s no punting on defense. You can’t escape it. You can’t get off the field. In my opinion, that’s where it can become dangerous.”

Matheny in particular had a standout performance in his first career game. The 6-foot-1, 209-pound safety intercepted Duke’s Chase Brice in the first quarter and finished with seven tackles and two tackles for loss.

“What a great kid,” Fuente said. “All he does is work his tail off and do everything you ask him to do. He’s been repping for some time there at the boundary. When his time came, he met the challenge. I think it’s just a tremendous story, honestly.”

“It was unreal to be honest,” Matheny said. “It’s kind of a dream of mine to be in this position and now it’s here… This is my dream, to play college football in Division I, like Power Five. That’s what I wanted to do.”

Through the first 30 minutes, Virginia Tech’s rag-tag defense held David Cutcliffe’s offense to just 91 yards and no points. The only points Duke scored came on a fumble return for a touchdown after a muffed punt by Tayvion Robinson. It kept the Hokies in the game early as the offense was out of sync with Burmeister never finding rhythm in the passing game, throwing an interception and settling for four punts in the first half.

The defense lost steam in the second half, getting fatigued due to a lack of depth. However, when Burmeister and Raheem Blackshear fumbled a handoff, giving the ball back to Duke down 31-28 with 4:35 left in the contest, the Hokies made the biggest stop of the game and forced a three-and-out. Norell Pollard sacked Brice on third down to force a punt.

“It was definitely big,” Emmanuel Belmar said. “Adversity hit us real big and I feel like that was the most energy we had from the defense throughout the whole first two games of the season. The fumble definitely wasn’t a good thing, but we got in there and we did what we had to do. We had to force a quick three-and-out. I feel like we set the tone. Our defense will step up in big situations like that.”

Virginia Tech’s defensive front was a problem for Duke all day long. The Hokies continually pressured the quarterback, collecting seven sacks in the game, including three from Emmanuel Belmar and two from Amare Barno. Jarrod Hewitt was also disruptive, with five tackles and 1.5 tackles for loss.

“Just really thrilled for [Belmar and Hewitt],” Fuente said. “Just a great group of kids. To see how they work and how they try to lead and the toughness that they show in terms of playing through the bumps and bruises and showing up every day to work hard. You love watching them have success. Those two have played a lot of snaps. They’re smart, tough football players that deserve to have success.”

Fuente and Company will hit the road again next week and travel south to face the 2-0 North Carolina Tar Heels, who survived Boston College on Saturday, 26-22. It’s far too early to know who will be available to play, but Saturday’s contest exhibited the will and resilience that Virginia Tech possesses no matter the circumstances.

“We’re coming together as a family,” Herbert said. “When one side of the ball needs the other, guys are stepping up and making plays. Young guys coming in, guys who haven’t played as much coming in and making plays. I think that’s going to play significant dividends down the road.” 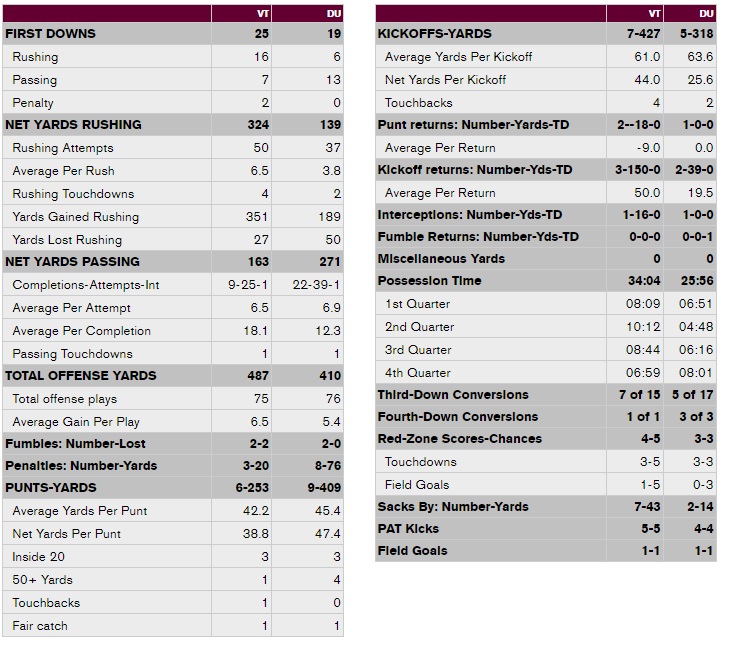 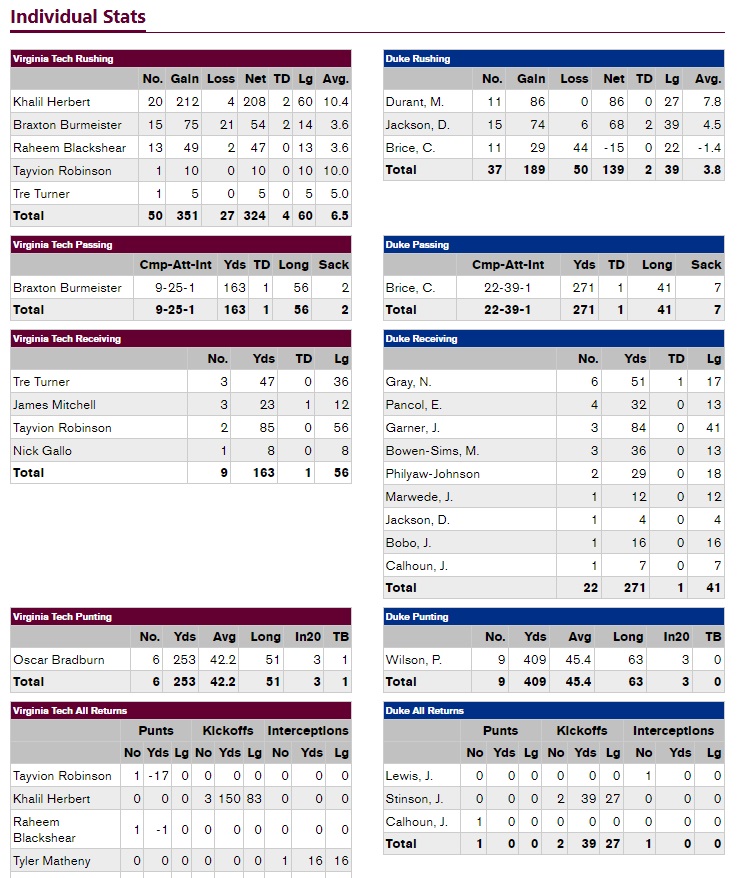