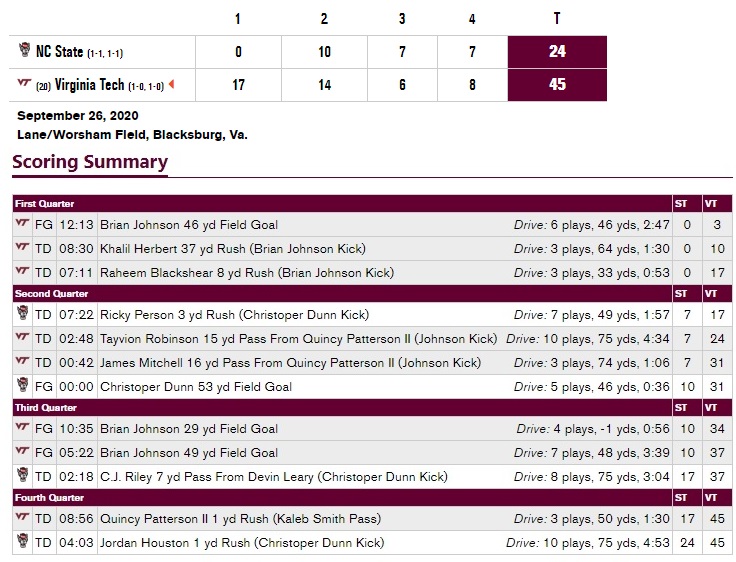 Virginia Tech football has been hit hard by COVID-19. A combination of positive tests and forced quarantines due to contact tracing resulted in postponing last week’s game against UVA.

In the lead up to this week’s opener versus NC State, the Hokies were limited to shorter practices with a “skeleton crew” due to a scarcity of available players. Game time arrived on Saturday night from Lane Stadium and 23 players and four staff members, including incumbent quarterback Hendon Hooker and new defensive coordinator Justin Hamilton, were deemed unavailable for various reasons from injuries to coronavirus to contact tracing.

Virginia Tech could have started the ballgame rusty, played sloppy throughout and not too many folks would be all that surprised. Instead, Justin Fuente’s team was sharp, disciplined, and masterful en route to a 45-24 triumph over the Wolfpack.

“Just really proud of our group,” Fuente said. “To say that we’ve been through a lot before we played our first game would be an understatement. Guys being out and making it back the day before the game or the day of the game. Guys coming back on Wednesday. Coaches not making it. Guys having to step into roles. People from our recruiting staff having to fill coaching roles, to our trainer and doc helping this team through this has really been a remarkable team effort.”

Oregon transfer Braxton Burmeister got the start in place of Hooker and looked the part early on. Khalil Herbert got the season started with a 31-yard rush. The Hokies settled for a Brian Johnson 47-yard field goal on the drive.

Following a Justus Reed sack to end NC State’s first drive, the offense got clicking behind the legs of Burmeister and Herbert. Burmeister picked up 27 yards on two carries before Herbert exhibited his breakaway speed on a 37-yard touchdown run down the left sideline. The grad transfer running back from Kansas finished the game with 104 yards on the ground on just six rushes.

“When we get to the second level and we get on our guy, it could be gone,” said center Brock Hoffman, a transfer from Coastal Carolina who sat out last year and saw his first game action for Tech against the Pack. “It could be six. It’s definitely fun going out there to play with those guys who make a lot of plays for us.”

Divine Deablo made his mark on the game with an interception, setting up a 3-play, 33-yard drive capped off by Raheem Blackshear (yet another transfer, from Rutgers) punching it in from eight yards out. Before you could blink, Virginia Tech led 17-0 with 7:11 left in the first quarter.

“I think we were excited to play,” Fuente said. “It’s been a long time since they were out on the field. They were tired of practicing. I can tell you that much. They came out and executed pretty well early on.”

Early in the second quarter, Burmeister exited the game with a hand cramp, where he couldn’t catch a snap. It paved the way for Quincy Patterson to take the reins of the offense, and from there he did not disappoint.

Just when it seemed the Wolfpack may be making it a game after forcing three consecutive punts and engineering a touchdown drive solely on the ground game, Patterson hopped into action and made his presence felt. Patterson stalled all NC State momentum with back-to-back scoring drives where his arm did the final damage, tossing 15-yard and 16-yard touchdown strikes to Tayvion Robinson and James Mitchell, respectively.

Last year we saw all three quarterbacks in Hooker, Patterson, and Ryan Willis throw a touchdown in the same game against North Carolina. This was another moment where Virginia Tech’s quarterback depth paid dividends.

“Me and Quincy are really close,” Burmeister said. “He did an awesome job when he stepped in and played great. We’re really close, so we talked about what each other were seeing and kind of just bounced back off of each other.”

Burmeister returned in the second half and ended the game 7-of-11 passing for 101 yards and 46 rushing yards while Patterson racked up three total touchdowns (two passing, one rushing) on 75 yards passing (4-for-4) and 47 yards rushing. Behind the strength of Hoffman on the offensive line, the Hokies rushed for 314 as a team, the first time they topped 300 yards on the ground in the ACC since 2010 against NC State.

“It was really, really fun out there competing with those guys,” Hoffman said. “Ever since I got here a year ago, two years ago, I’ve just tried to come in and implement this edge and nastiness to us. I started to see it last year with a lot of these young guys coming on even though I wasn’t playing. I still tried to implement it in practice and all that kind of stuff. I really think this year we took some strides in camp. I couldn’t be more proud of my guys up front on the o-line. We really got after it and did our thing.”

Virginia Tech’s defense was impressive throughout, especially considering the circumstances. Hamilton was expected to make his long-awaited debut as the Hokies defensive coordinator after Bud Foster had commanded the post since 1995.

However, Hamilton was forced to miss the game with the team learning the news this morning. Linebackers coach Tracy Claeys would be expected to be the next in line after serving as a defensive coordinator for over a decade, but he was also unavailable after missing the whole week. It left the task in the hands of 29-year-old cornerbacks coach Ryan Smith, who was coaching his first game as an assistant at the Power 5 level after spending the last three seasons at James Madison and Elon.

“[Smith] did a great job,” Fuente said. “We practiced this in our second scrimmage. We lined up and took about four sets and had back up play callers on both sides of the ball go at it. Ryan has a bright future in this game and he is really sharp. He was prepared. When I told him this morning what we were going to do, he was neither surprised nor taken back. He was ready for the moment and stepped up to the plate.”

Smith’s defensive squad was stout throughout, forcing two interceptions – the aforementioned one from Deablo and another by Brion Murray – along with six sacks. Grad transfer defensive end Justus Reed led the way with two sacks and five tackles. After NC State rushed for 270 yards last week in its 45-42 victory over Wake, the Hokies limited the Wolfpack to just 139 yards rushing on 42 attempts.

“I think you can tell the respect the team has for [Reed] when he does make a play,” Fuente said. “He’s got a grown up body. He’s a grown man out there. He’s really endeared himself to this coaching staff and these players. It’s a guy we’re rooting for… He’s a good example for some of our young players.”

Virginia Tech returns to action on the road next Saturday at 4 p.m. against Duke. It remains to be seen who will be on hand, but Saturday’s contest was among Fuente’s best coaching performances and an indication that the Hokies will rely on a vast collection of players in this wild, uncertain college football season.

“We know we’re in a pandemic, so nothing is guaranteed,” Reed said. “It’s next guy up. Keep doing what we got to do. We’re not worried about the stuff we can’t control.” 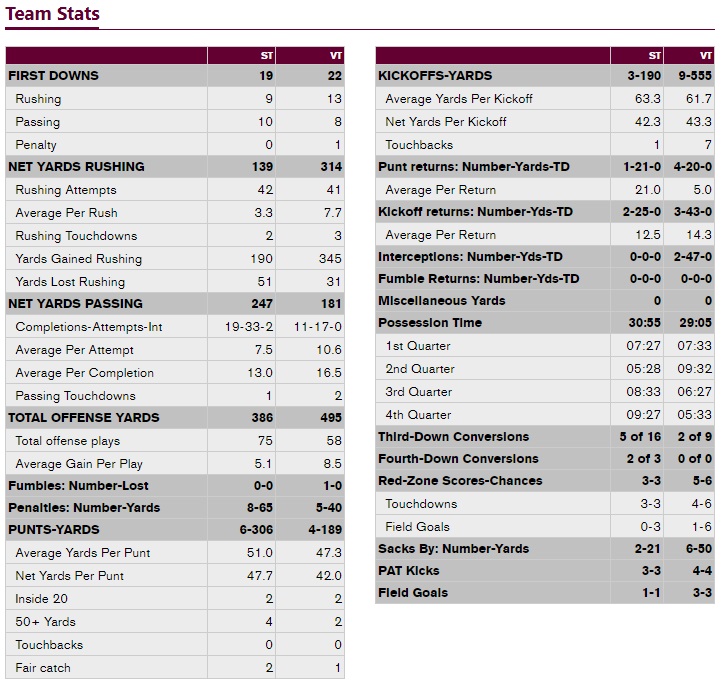 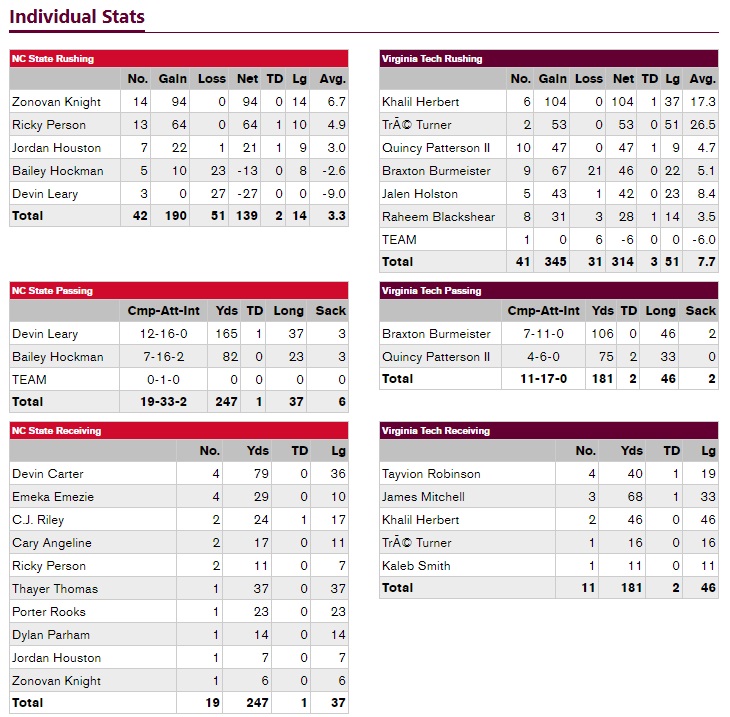