The ACC announced today that the previously-postponed football game between Virginia Tech and Virginia has been rescheduled for Saturday, December 12, 2020. 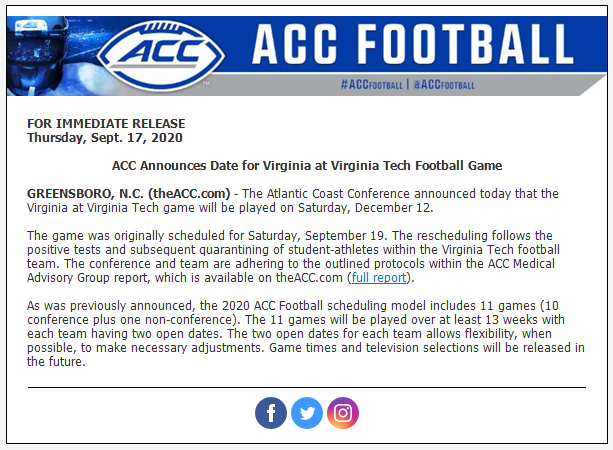 The game, which was originally scheduled to have the prime 7:30 ABC slot on September 19, was postponed on September 12 because Virginia Tech decided they could not field a competitive team safely due to COVID-19 positive tests, contact tracing and quarantine, and injuries.

“It became pretty apparent as we approached the weekend and our mock preparations for the first game … that we were not going to be able to safely play a football game,” Virginia Tech head coach Justin Fuente said on Monday night’s Tech Talk Live radio program.

At the time of postponement, no makeup date was announced, until today.

We have updated the schedules on our site. For a look at the current schedule, visit our Virginia Tech football schedule page or our home page.