TechSideline’s own Evan Hughes was named a Sportscasters Talent Agency of America (STAA) All-American on Friday in an announcement by CBS Sports.  He was also one of six finalists for the Jim Nantz Award, which is presented every spring to the nation’s most outstanding collegiate sportscaster.

In an impressive accomplishment, Hughes finished second in the Jim Nantz Award voting.

Evan Hughes is a rising senior at Virginia Tech in the Sports Media and Analytics program, which was created in 2016 and became a major this year.  Besides hosting the TSL Podcast, Hughes is Director of Radio Broadcasting for the St. Cloud Rox in the Northwoods League, where he was named the 2018 Broadcaster of the Year. Hughes does select work for the ACC Network Extra, including play-by-play and sideline work for various Virginia Tech sports.

Everyone please join us in congratulating Evan for this prestigious accomplishment! Here’s a look at his impressive highlight reel that was submitted for Jim Nantz Award consideration.

About the Jim Nantz Award

Founded in 2009, the All-America Program and Jim Nantz Award is presented by Sportscasters Talent Agency of America. Each year the judging panel is comprised of leading members of the sportscasting industry and former Jim Nantz Award winners.

Awards include the Jim Nantz Trophy, STAA membership services, and All-America certificates. The Nantz Award winner will also receive hotel accommodations and admission to all the activities of the 2019 National Sports Media Association (NSMA) awards weekend in Winston-Salem, NC, culminating in the NSMA awards banquet where the Jim Nantz Trophy will be presented. 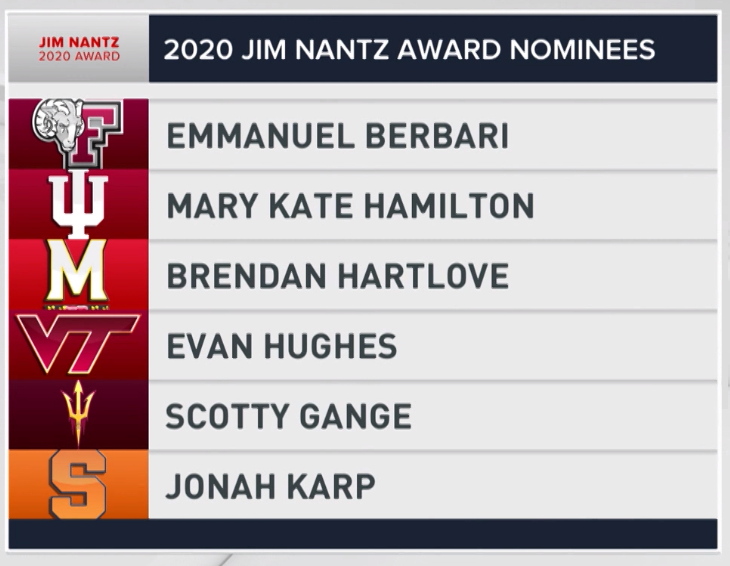