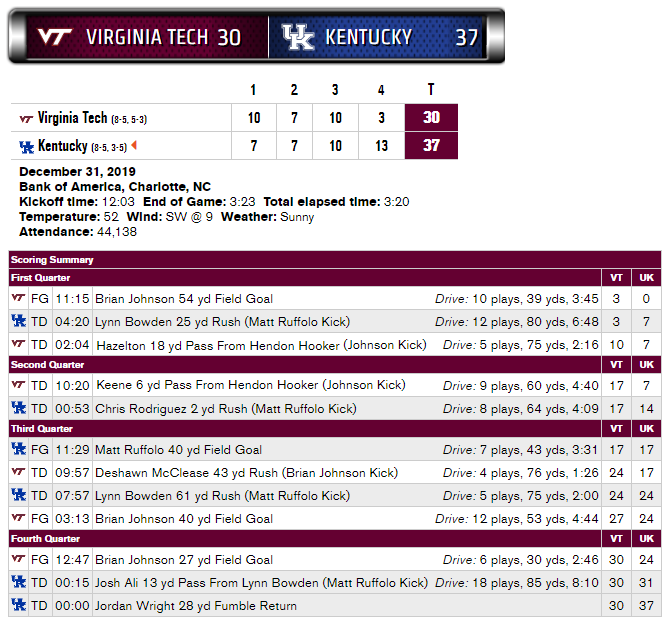 Lynn Bowden Jr. hadn’t completed a traditional dropback pass the entire game against Virginia Tech. That was until Bowden found Josh Ali for a 9-yard completion to move the chains on a pivotal fourth-and-7 with 3:37 remaining.

Nine plays later against a gassed Virginia Tech defense, and after another fourth down conversion, Bowden connected with Ali again in the end zone with 15 seconds left. Matt Ruffalo’s extra point gave Kentucky the 31-30 advantage.

“We had some opportunities to make some stops to finish the game and didn’t and that was kind of the disappointing thing,” defensive coordinator Bud Foster said. “We had that fourth-and-six in that range, that’s the one completion he did have. I don’t know how many he had.

“All day as we were preparing for these guys, we were going to play so far inside on their No. 1 receiver and not get beat inside because he couldn’t throw an out cut. We get beat on two inside plays there.” 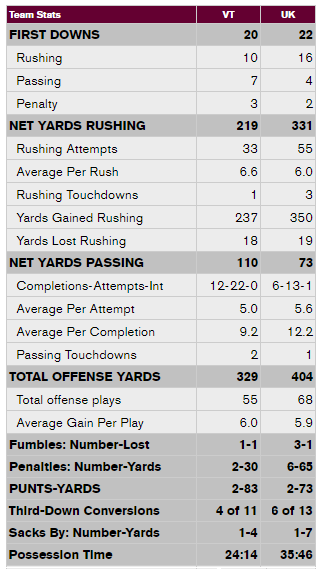 A last-second fumble return touchdown by the Wildcats’ Jordan Wright on a failed lateral play sealed the Belk Bowl, giving Kentucky (8-5, 3-5 SEC) a 37-30 triumph over Virginia Tech (8-5, 5-3 ACC). It all added up to another Hokies’ heartbreaker in a decade full of them.

“The fact that we didn’t come through in this game doesn’t diminish my pride in them, my excitement for the direction of our program, my belief in what we’re going to be,” head coach Justin Fuente said. “We were awfully close on both sides of the ball today, but ultimately, one play here or there on either side of the ball and they ended up winning it.”

Bowden finished the game as the Belk Bowl MVP with 34 carries for 233 yards and two touchdowns. He was also 6-of-12 passing for 73 yards with the game-winning touchdown and an interception.

“It’s what he’s done to everybody,” Fuente said. “He’s a great player. He’s competitive, he’s tough, strong, never looks like he’s in a hurry out there.”

“He just has really quick feet,” linebacker Dax Hollifield said. “He can put his foot in the ground and make any move he wants. He showed you today that he’s a really special player.”

The game-winning drive spanned 8:10 of game action, accounting for 85 yards on 18 plays. The passing touchdown was just Bowden’s third of the season.

“(It means) everything,” Bowden said of the game-winning touchdown being a pass. “Y’all [the media] said I couldn’t throw.”

Tech came into the game without both starting cornerbacks, Caleb Farley and Jermaine Waller. Against a Kentucky team that was No. 4 in the nation running the ball and hasn’t been effective throwing it, it didn’t seem like a big deal.

That was proven wrong when replacement Armani Chatman was beat for the final touchdown and committed a pass interference penalty earlier in the game that wiped out a Chamarri Conner interception, eventually leading to a Wildcats’ touchdown.

“Armani played well, but had a couple critical errors when it’s all said and done with the PI and giving up a couple plays at the end,” Foster said. “I’m excited about those two kids. Armani is going to be a really good player. Brion [Murray] continued to improve. It would have been nice to have those guys back [Farley and Waller] because they were All-League guys.”

The Hokies were the first team to score 30 points on Kentucky’s defense this year. Virginia Tech rushed for 219 yards on 33 rushes (6.6 avg.) Deshawn McClease led the way offensively with 11 carries for 126 yards and a touchdown.

The redshirt junior has now rushed for over 100 yards in three straight bowl games.

“They’re fun. Bowl games are fun,” McClease said. “We have a lot more time to prepare for the opponent. It’s just a lot more chilled and a lot more laid-back.”

After a forced fumble recovered by Jaylen Griffin gave the Hokies the ball at Kentucky’s 39-yard line to end the third quarter, Hendon Hooker and Co. drove inside the 10. However, Fuente decided to kick a field goal on fourth-and-3 from the 9-yard line to increase Virginia Tech’s lead to 30-24 with 12:47 left in the game. He explained his decision to not go for it in the situation, even after converting a fourth-and-8 earlier in the game.

“There’s just so much time left, you know,” Fuente said. “I didn’t know what the time of possession was after that. I feel like they had the ball most of the time. So yeah, I thought about (going for) it. Felt like there was so much time left in the game that we kicked it.”

Virginia Tech won the turnover battle 2-1, which included the fumble and a Brion Murray interception, but only scored three points off of those turnovers. The Hokies also got the ball back with 9:48 in the fourth, but a quick three-and-out gave the ball back to Kentucky for the game-winning drive.

As of right now, Virginia Tech will return 21 of 22 starters next year, with safety Reggie Floyd being the lone departure as a graduate. That includes quarterback Hendon Hooker, who deserves a large portion of credit for the turnaround, going 6-2 as the starting quarterback.

“Very encouraged,” said Hooker, who finished the game 12-of-22 passing for 110 yards and two touchdown passes to Damon Hazelton and Dalton Keene. “Have a lot of guys coming back. Everyone is hungry to get better. We’re motivated from these losses we just had. I’m eager to see what the future holds.”

The one mainstay for the Hokies who won’t be returning in 2020 is Foster, the man who spent the last 33 years coaching in Blacksburg. Foster’s final game didn’t end the way he would have liked, but he left with one final message declaring his love for the years he’s spent at Virginia Tech.

“The best person I ever met in my life outside of my family was Frank Beamer,” Foster said. “Frank taught me a lot of things, not just football. How to treat people, how to care about people, how to be approachable, how to be transparent. I think that’s what happened is everybody knew we were all in this thing together. That’s how I feel. That’s what kept me here for a long time.

“We were winning at the highest level and we had a fanbase that was energetic and enthusiastic and cared as much as anybody in the country and that has not wavered. I can’t thank them enough for all their love and generosity and support. I know sometimes they’d like to throw me under the bus, but for the most part we’ve put a product out there on the field that made them proud and was really special.”

There was certainly no love lost between the two teams. In a scuffle before the game, Bowden threw a punch at defensive tackle DaShawn Crawford, but since the incident occurred outside of an hour before the start of the game, no penalty could be incurred.

“The referees’ jurisdiction starts an hour before the game,” Fuente explained.

Bowden apologized for his actions postgame.

“It’s a lot of emotion,” Bowden said. “I could have hurt my team and not been out there tonight with them, so I just apologized to my program, my teammates. I did it before the game, I apologized to them guys. We respect Virginia Tech.”

On Kentucky’s fourth-and-1 conversion with 1:01 remaining, Alan Tisdale came out of the pile with the ball, but it was ruled that Bowden’s forward progress had been stopped. Fuente offered his explanation of the play.

“They review all that stuff,” Fuente said. “The whole taking a challenge flag timeout deal in college football, they’re reviewing it. The guy tells me that they reviewed it and it’s been confirmed, don’t waste your timeout.”

Rayshard Ashby and Tisdale led the team with 14 total tackles each. Ashby finished the season with a team-leading 120 tackles, and he’ll return as the senior leader for next year’s team.

“A long ways to go,” Ashby said. “A lot of things to work on. We’ve just got to be better during the offseason.”

Deshawn McClease may or may not have played his last game in a Virginia Tech uniform. The redshirt junior has now graduated with two degrees and he has one year of eligibility remaining, but he could decide to end his career after five seasons with the Hokies.

“I’ve thought about it,” McClease said. “I still have some discussing to do with my family and the coaching staff. I’ll take as much time as I need to evaluate things.” 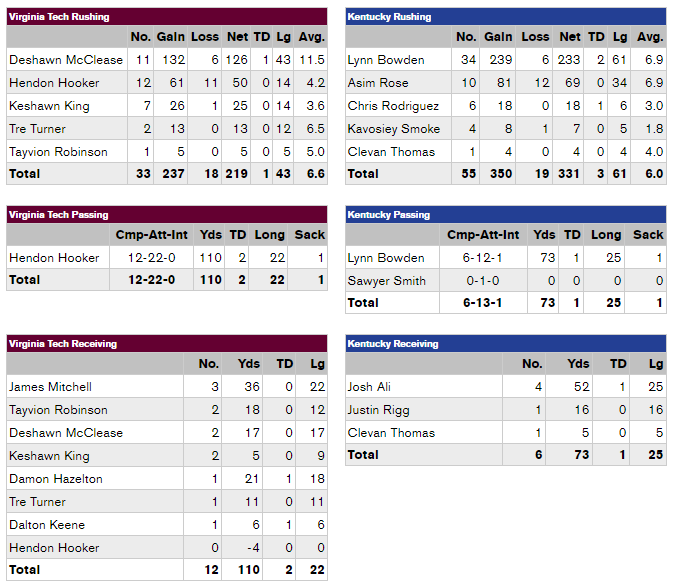