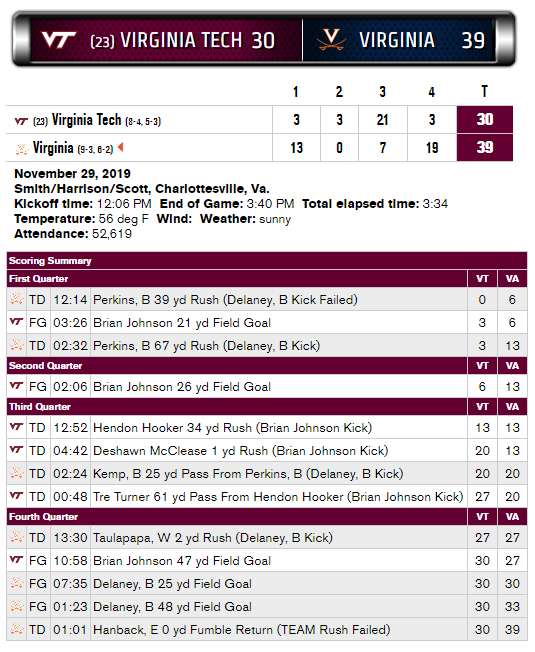 Virginia Tech head coach Justin Fuente entered the room beside the visitor’s locker room and appeared stunned. He carefully crafted every word and spoke with a slow, somber tone.

The normally lively Tre Turner didn’t have words and had to stop in the middle of his media availability at one point, on the verge of tears.

“I told them I loved them and I was proud of them,” Fuente said. “I thought they competed. I told them they can take this event and go one of two ways. It can draw us closer together, fuel our fire. We still have one more opportunity to play football together.”

“You can tell this one hurts,” said wide receiver Tayvion Robinson, who caught three passes for 45 yards. “You just have to move on.”

Virginia Tech’s defense knew coming into the game that UVa’s quarterback Bryce Perkins could present a multitude of challenges as a dual-threat quarterback. He was a headache the entire afternoon for Bud Foster and Co., passing for 311 yards and a touchdown along with a career-high 164 yards rushing and two touchdowns.

Perkins’ 475 yards of total offense accounted for 96.5 percent of all of the Cavaliers’ total yards.

After rushing touchdowns of 39 yards and 67 yards to open the game, the Hokies seemingly figured out UVa’s gameplan and shut him down, forcing a three-and-out on six of the next seven drives. However, Perkins then relied on the passing game and hit big play after big play against this Tech defense that hadn’t allowed a touchdown in nine quarters coming into the game. 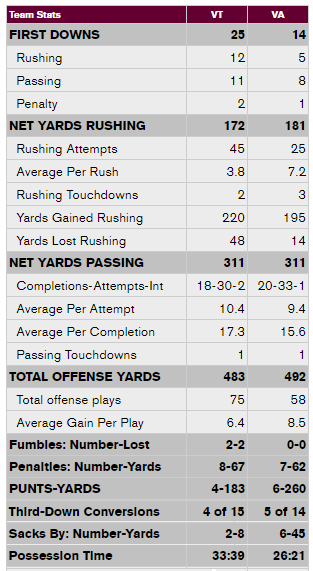 “I pressured a couple of them when they hit us,” Foster said. “Then I came back and just played base defense.

“He wasn’t throwing the ball well at all in the first half. Our job was to keep him in the pocket and we did. In the second half, he made a couple nice throws… The quarterback got a little self-confidence in the second half. That’s all part of it.”

Missing from the action was Caleb Farley, who’s been playing at an All-American level in 2019. The redshirt sophomore was dealing with back spasms and just couldn’t give it a go after going through pregame warmups. Armani Chatman was placed in the starting lineup in Farley’s absence.

“Caleb is an accomplished player and he really wanted to go,” Fuente said. “His back has been stoved up for the last couple of days. He’s been battling it the whole season, and he’s really been a tough competitor the whole time. He wanted to play and just couldn’t. Armani, I thought, accounted for himself well.”

The Hokies have protected the ball so well ever since the quarterback switch to Hendon Hooker, but the turnover bug returned today in Charlottesville. Tre Turner fought for extra yardage in the first half and coughed the ball up. Hendon Hooker was intercepted on a Hail Mary to end the half, snapping his streak of 124 passes without an interception to begin his career.

Late in the game, facing a third-and-20, Hooker was intercepted at UVa’s 35-yard line with 4:47 remaining in a situation where Oscar Bradburn likely pins the Cavaliers deep in their own territory.

“I was trying to make a play and the defensive player made a better play than me. That’s how the game goes,” Hooker said.

That led to the eventual game-winning 48-yard field goal for UVa’s Brian Delaney, after he missed an extra point earlier in the contest. Hooker and Co. got the ball back, down 33-30 with 1:23 remaining to tie the game or take the lead. Instead, the Cavaliers dialed up the pressure and sacked Hooker on three straight plays. On the final one, Mandy Alonso got to Hooker and forced a fumble that was recovered by Eli Hanback in the end zone for a game-sealing touchdown.

“We were in our two-minute offense and we were just trying to make first downs,” Hooker said. “Move the ball down the field was the priority. We just came up short.”

Hooker finished the day 18-of-30 passing for 311 yards, with a touchdown to Tre Turner for 61 yards in the third quarter. Turner finished with seven catches for 134 yards and the touchdown, while Damon Hazelton hauled in seven passes for 118 yards.

Deshawn McClease was the leading rusher with 86 yards and a touchdown. Meanwhile, Hooker added 44 yards on the ground with a touchdown.

“I thought he played pretty well,” Fuente said of Hooker, who dropped to 6-1 as a starter. “He played his tail off. We got in a situation there at the end of the game where everybody there knows we’re throwing the ball. That’s not our strength.

“It’s not always going to go your way. I thought he gave us a pretty good chance to win the football game… He’ll learn that part of that position is you get too much praise when you win and too much criticism when you lose.”

So where do the Hokies go from here? Gone are the dreams of an ACC Championship appearance and potential bid to the Orange Bowl. Instead, they’ll have one more bowl game, with the Belk Bowl appearing to be a likely location. Check Fresh Thyme Ad and Giant Eagle Ad.

“Luckily, we have been on that positive side a lot more than we haven’t,” Foster said. “Our kids will remember this one I think. I talked to them about a rivalry. A rivalry is when two teams win, and now this team won.”

Virginia Tech can take a page from UVa’s book on how to use this loss for motivation heading into next season. The Cavaliers have 14 seniors on its current roster, and it seems like more were honored today on Senior Day. Meanwhile, the Hokies will return 21 starters next season if there are no departures. The loss will sting for a while, but it will make for an even more impressive response.

“We can use Virginia as a perfect example from a year ago,” Foster said. “You look at Virginia, they had a devastating loss, they go back and win a bowl game against an SEC team and really had some momentum going into the season. I really think we can do the same thing. We can look at ourselves. We made tremendous strides this year… We can build off of this.” 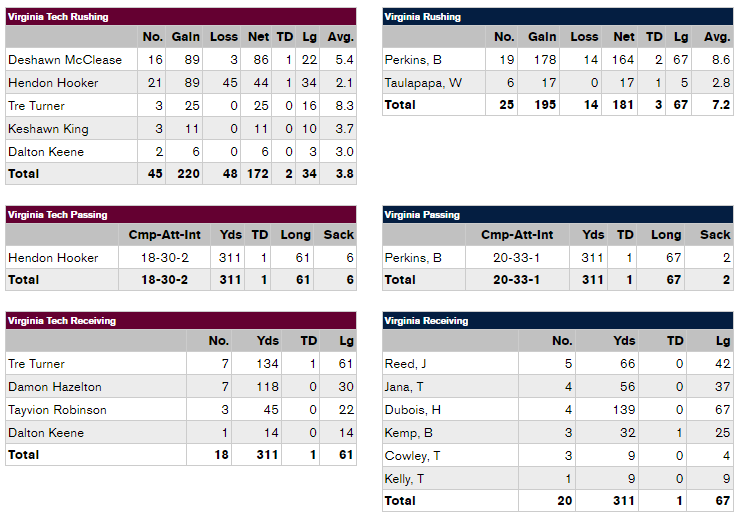