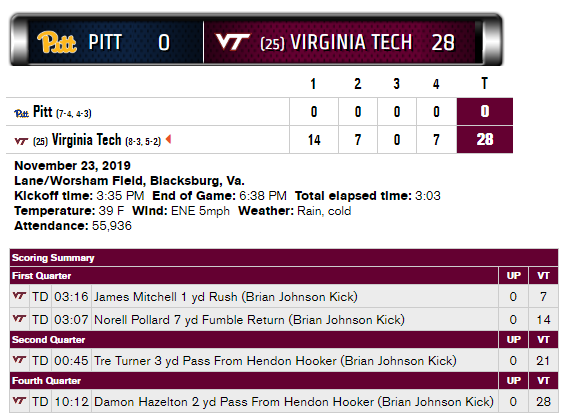 Earlier in the week, Virginia Tech defensive coordinator Bud Foster said he expected a “60-minute fistfight” heading into the matchup against Pitt. It appeared to be trending that direction through the majority of the first quarter.

Virginia Tech’s offense punted on the first two drives and threatened on another before a botched snap on fourth-and-1 gave the ball to the Panthers at midfield. Meanwhile, Pitt had nothing going with three consecutive three-and-outs to begin the game.

That all changed on the Hokies fourth drive.

Hendon Hooker rolled out to his right and hit Tayvion Robinson along the left sideline as he got drilled. Robinson broke free through a few tacklers before being taken down at the Pitt 1-yard line. From there, James Mitchell, wearing the honorary No. 25 jersey, took it on the jet sweep for his fourth rushing touchdown on the season.

On the ensuing possession, the iconic Lunch Pail Defense made an appearance in Bud Foster’s last game inside the confines of Lane Stadium. Rayshard Ashby came off the edge and sacked quarterback Kenny Pickett, forcing a fumble in the process. True freshman defensive tackle Norell Pollard picked it up and rumbled forward seven yards for the 74th defensive touchdown of Foster’s career.

“What a big time play by Rook,” Foster said of Ashby, who finished with seven tackles and 1.5 for loss. “I don’t know if there’s a guy right now that means more to a defensive unit… The guy just makes play after play after play.”

“It’s a big momentum swing for us,” free safety Divine Deablo said of the defensive touchdown, the Hokies third one in the last four weeks. “It gets a lot of juice on the sidelines.” 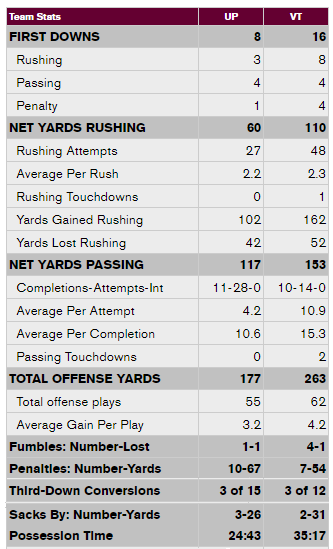 “Our guys are playing with some confidence now and it’s fun to watch,” head coach Justin Fuente said. “I do believe we are a tougher football team than we were when we started.

“They’re a special group of young men who have been through special circumstances and stuck together. My feelings towards them haven’t changed because they’re winning games now. I’m more happy for them because they are getting some affirmation for their hard work.”

It was another standout performance for the defense. Foster and Co. pitched its second consecutive shutout, the 34th in Foster’s career as defensive coordinator. Cheers of “Bud Foster” rang out late in the stands during the fourth quarter, as the home crowd was treated to one final defensive masterpiece.

“I’m really happy for them (the players) No. 1 because they’re the ones who have put so much work and effort into this thing and buy in to trusting the process and the commitment and everything it takes to perform at this level,” Foster said. “That’s where we’ve been so much better since Duke, is our execution has continued to get a little bit better each week.”

The last time the Hokies shutout their opponents in back-to-back weeks was 2005 versus Ohio and Duke. It had never been done versus two consecutive power five opponents before today.

Virginia Tech last allowed a score with 8:59 in the third quarter against Wake Forest on a Sage Surratt reception. It’s now been 143 minutes and 59 seconds since the last score against this defense, spanning over 32 possessions.

Tech has outscored opponents 96-0 over that time.

“Down the stretch, the Wake game and to go to Georgia Tech and play the way we did against one of our bitter rivals in this league,” Foster said. “This was a playoff game today, basically. To play the way we did, we didn’t play tight… To see that from a coaching perspective is very gratifying and I know it’s rewarding for the guys.”

Has Fuente ever been part of a run like this?

“No,” he said. “I don’t know that I’ve been a part of that before, when the teams were evenly matched. We had a run there at TCU when we were the best team in the league by a long ways except for a couple games… We’ve got to fight all those pats on the back that we’re going to get to understand why we’re getting them. We’ll roll our sleeves up and get ready to get back to work.”

On Saturday, Pitt tallied just 177 total yards and 60 rushing yards after gashing the Hokies for 492 rushing yards and 654 total yards last year. Kenny Pickett came into the game completing 61 percent of his passes but was held to 10-for-26 (38.5 percent) passing for 103 yards. The Panthers were just 3-for-15 on third down and 0-for-3 on fourth down.

Hooker and Co. engineered his second 90-yard scoring drive of the game near the end of the second quarter. It was extended when Pitt jumped offsides on fourth-and-2. Robinson then came up with a big play again on a 32-yard reverse before Hooker found Turner in the corner of the end zone for a 3-yard touchdown. The score made it 21-0.

Tech delivered the knockout punch after Jarrod Hewitt knocked down Pitt’s fourth down pass, giving the ball back to the Hokies at the Panthers’ 25. Four plays later the lead was increased to 28-0 after Hooker found Damon Hazelton on the third down fade for the 2-yard pitch and catch, the redshirt junior’s seventh receiving touchdown of the season.

“It’s really unique, everybody coming together as a family,” Hooker said. “Just showing love and support. At the same time, everybody expects you to do your job. It’s been good.”

Hooker finished the game 10-of-13 for 153 passing yards and two touchdowns. He added 27 yards on the ground on 20 attempts.

“He continues to evolve,” Fuente said of his starting quarterback. “He’s got good leadership skills and throwing the football, he continues to come to work every week and focus on his improvement. Hopefully we can get that to continue.”

The victory sets up a winner-take-all matchup next week in Charlottesville against Virginia. Both teams will enter with a 5-2 record in the ACC, with the winner representing the Coastal Division to face Clemson in the ACC Championship.

“It’s an exciting time for the state of Virginia,” Foster said. “I’m excited for us. As we’ve been in this league, we’ve been a big time contender. I always felt like the road to the ACC Championship came through Blacksburg, and it’s doing that now. It’s along the way. It’s fun to be back in the mix and in the hunt.” 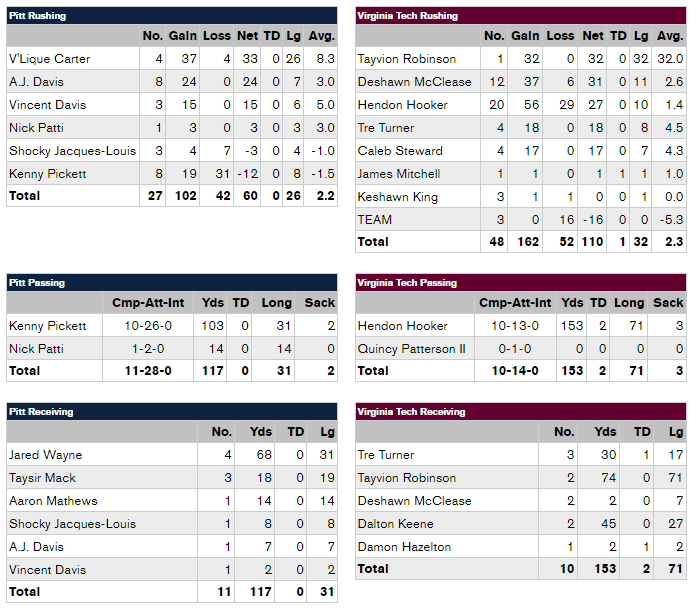