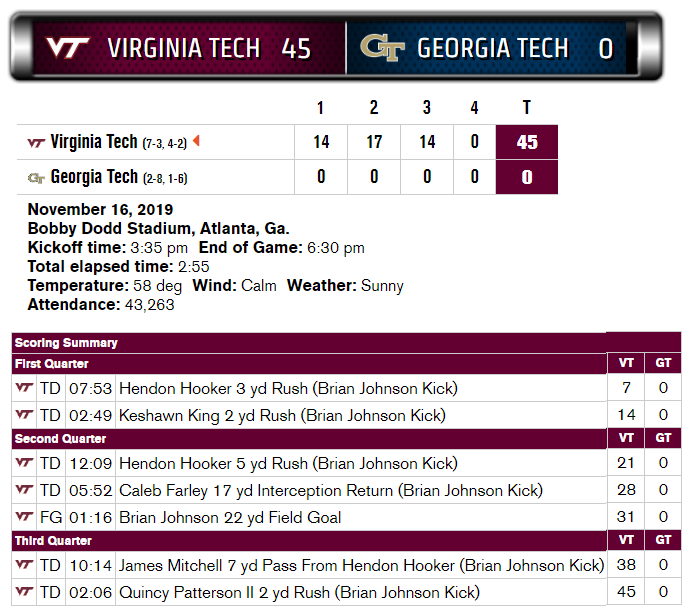 Justin Fuente had never beaten Georgia Tech during his tenure as head coach at Virginia Tech. Over those past three meetings, Fuente and Co. were outscored 107-70.

Last year, the Yellow Jackets waxed the Hokies 49-28, compiling 465 yards without completing a pass. Even the Jerod Evans-led squad in 2016 lost 30-20, and that was with two touchdowns to make a 30-6 Georgia Tech lead look reasonable in the final five minutes. 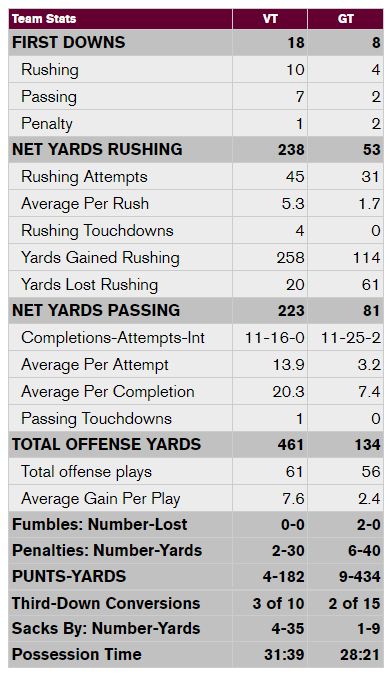 That all changed on Saturday. Virginia Tech (7-3, 4-2 ACC) outplayed, outmuscled, and out-talented Georgia Tech (2-8, 1-6 ACC), putting behind the memory of those past performances en route to a 45-0 triumph.

“I feel fortunate that we were able to play a lot of people and spend the better portion of the second half just trying to get the game over with,” head coach Justin Fuente said. “I saw some young guys go out there and compete a little bit. That’s fun to be part of when the starters do their job… We haven’t done it all year.”

This year, the Hokies entered Bobby Dodd stadium without having to prepare for the headache-inducing triple option run by former Yellow Jackets head coach Paul Johnson, who retired after the 2018 season. Georgia Tech was the inferior team going through an offensive transition to the spread.

Everything was in line for Virginia Tech to make a statement with a compelling victory, and it did exactly that.

The Hokies defense forced four consecutive three-and-outs to begin the game. It took a little under 20 minutes of game action for the Yellow Jackets to gain a first down. At the half, Georgia Tech’s offense produced just 48 total yards and 134 for the game.

“We didn’t give up any explosive plays in the run game or the pass game and that was the key to it,” Virginia Tech defensive coordinator Bud Foster said. “They’ve had some explosive plays. They’ve been able to get guys loose, and they weren’t able to do that against us.”

After punting on the opening drive of the game, Virginia Tech quarterback Hendon Hooker and Co. proceeded to lead three touchdown drives in a row. Each drive was highlighted by a chunk play to jumpstart the attack.

Slot receiver Tayvion Robinson started it off with a 49-yard rush on a wide receiver reverse. Four plays later Hendon Hooker kept it up the middle for a 3-yard rushing touchdown to make it 7-0. On the next possession Hooker connected with Tre Turner for 37 yards on a deep ball, and Keshawn King later found paydirt from two yards out. To begin the second quarter, Turner picked up 39 yards on a jet sweep, and Hooker capped it off with a 5-yard touchdown, his second rushing touchdown of the game to make it 21-0.

“With the exception of the first drive, I thought we were pretty efficient,” Fuente said. “We made some big plays. We didn’t really score on the big plays… but I liked our execution. I don’t know that we went in trying to do anything different than what we tried to do all the time. We certainly were efficient there early on.”

A 17-yard pick six by Virginia Tech cornerback Caleb Farley made it 28-0 with 5:52 in the second quarter, essentially ending the game. Georgia Tech quarterback James Graham, a one-time Virginia Tech commit during the 2018 recruiting cycle, rolled to the right out of his own end zone and threw an ill-advised pass towards the sideline. Farley jumped in front for his fourth interception of the season, which ties for the lead in the ACC, and returned it 17 yards for a touchdown.

“It’s great to see us defensively get on the board,” Foster said. “I know we did it a couple weeks ago against Notre Dame. Sometimes those things snowball a little bit, so I’d like that to be a trend over these next couple ballgames.”

The beatdown continued in the second half.

Following Georgia Tech’s second first down of the game, Graham tossed his second interception into the hands of Dax Hollifield after Emmanuel Belmar applied the pressure. Hollifield has now intercepted a pass in three straight games. Hooker found James Mitchell from seven yards out for the touchdown to increase the lead to 38-0.

The drive ended Hooker’s day, finishing 9-of-13 passing for 159 yards and a touchdown along with two rushing touchdowns. Virginia Tech is now 5-0 with Hooker as the starting quarterback.

Quincy Patterson got in on the action with a 64-yard pass to Keshawn King, the longest of the Chicago native’s career. He extended the lead to 45-0 with a 2-yard power run up the middle for a touchdown.

“I think guys are playing with more confidence as a group,” Fuente said. “We’ve been able to have some success and do some things off of that, if that makes sense. We’ve been able to keep people off balance, and it starts with running the football. I go back to that all the time. That just continues to help the variety of what we’re able to do.”

The Hokies outgained the Yellow Jackets 461-134 over the course of the game. Georgia Tech didn’t surpass over 100 yards of offense until there was under six minutes remaining. It was the first shutout since 2017 when Virginia Tech defeated Virginia 10-0, and the 33rd under Bud Foster. Georgia Tech had scored in 282 consecutive games, since October 18, 1997.

“It’s hard to do,” Foster said of the shutout. “That’s a feather in the cap. It’s like icing on the cake when it’s all said and done.”

The Hokies now extend their bowl streak to a nation-leading 27 straight seasons with the seventh win of the season. It’s something that appeared to be a serious question mark in late September.

“If it was that easy, everybody in the country would do it,” Foster said of the bowl streak.

“We have a lot of football to play against some very good teams, but I think they’ve seen the improvement that they can make,” Fuente said of his team. “I think they do have some confidence. I think it’s because they’ve had a little success.

“They’ve stuck together through some tough times, so it makes them feel better. I just feel like from a preparation standpoint, when we watch the film, the execution level, I’m talking about both sides of the ball, has been higher… I feel like we’re better emotionally. Certainly less fragile than we were.” 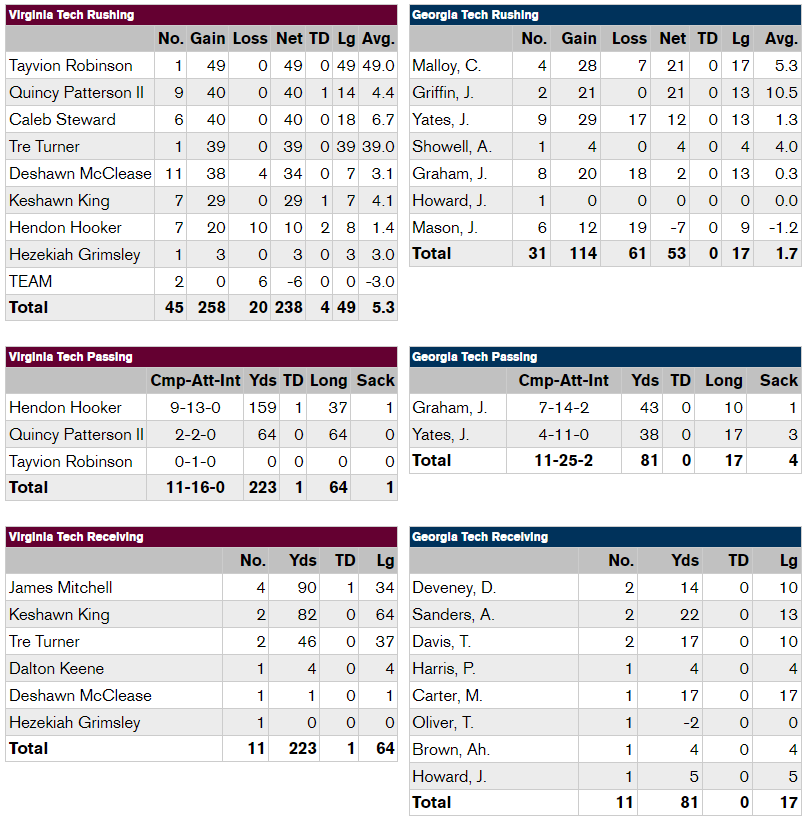