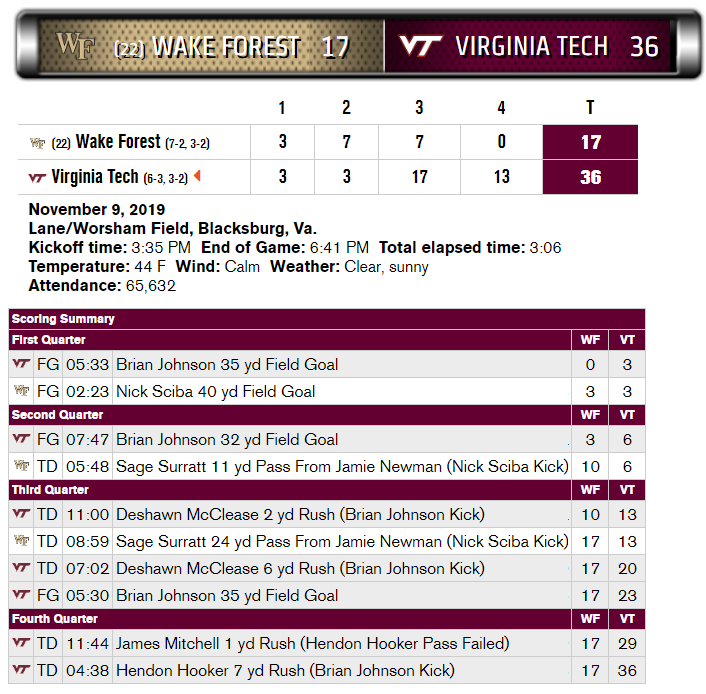 Despite all the accolades, despite the newly unveiled Bud Foster banner with the lunch pail inside Lane Stadium, and despite becoming a legend in the town where he arrived 33 years ago, Bud Foster is still as humble as they come.

During his entire career he’s deflected attention away from himself and given credit to his players for all that he’s been able to accomplish. 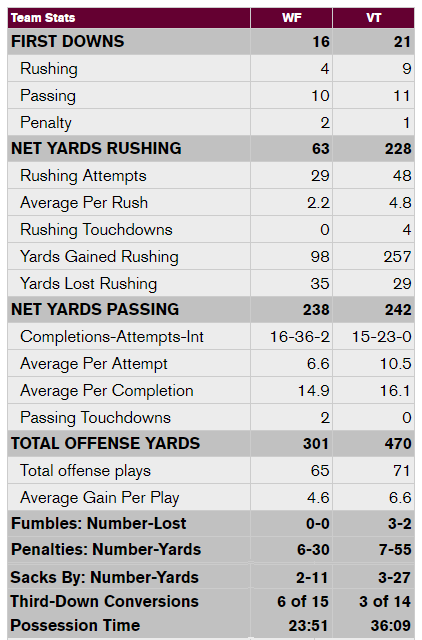 That’s why it was all the more fitting when Foster was lifted and carried on the shoulders of those players onto the field after Virginia Tech (6-3, 3-2 ACC) defeated No. 19 Wake Forest 36-17 on the day where Foster was honored for over three decades of excellence.

“Today they recognized me and honored me, but in a lot of ways it was an honor to those guys who played,” Foster said. “They’re the ones who made the commitment, helped create the brand and the culture and the standard. Today made it very, very special.

“I’ve put a lot of heart and soul into this thing. It’s kind of bittersweet. I’ve had a great run. We’ve done some really special things and to know that it’s slowly coming to an end… It was a dream come true and I’m just so appreciative and thankful. I’m proud, but also it was an emotional time.”

Foster was honored pregame and joined midfield with his family, Frank Beamer, Whit Babcock, and Justin Fuente. The former Broyles Award winner was moved by the celebration and the stands filled with ‘This One’s For Bud’ streamers, but there was still a game to be played. A game that Virginia Tech controlled from the opening snap.

“That’s pretty much what we broke out every time we went on the field,” said free safety Divine Deablo, who led the Hokies with nine tackles. “We said, ‘Do it for Bud.’ It’s something we’ll all remember for the rest of our lives.”

It was a classic performance by a Bud Foster-led unit. Wake Forest entered the game averaging 510.6 yards per game, a number good for No. 7 in the nation. The Hokies held them just 301 yards. Wake had been averaging over 85 plays per game. Virginia Tech let them run just 65 plays. The Demon Deacons were averaging 38.0 points per game. Foster and Co. allowed just 17 points, Wake’s lowest output this season.

“That meant a ton,” linebacker Dax Hollifield said. “That’s the greatest defensive coach ever. To send him out on his day here was pretty special for everyone on defense.”

It was a particularly special day for Hollifield, someone who, as one of Foster’s prized recruits, dedicated this season to him. Hollifield sealed the deal on an interception with 4:41 remaining that fell into his hands after defensive end TyJuan Garbutt hit Wake’s quarterback Jamie Newman on the release, popping the ball high into the air.

“I just didn’t want to drop the thing,” said Hollifield, who finished with six tackles and two quarterback hurries. “I swear the ball was in the air forever.”

On the very next play, Hendon Hooker took the carry straight up the gut for a 7-yard touchdown to bring it to the final score of 36-17. Later when the Hokies entered victory formation, Hollifield and Foster shared a moment on the sideline.

“He told me, ‘You’re going to lead this place back to where it was.’ He’s the reason I’m here,” Hollifield said. “I know he loves me with all his heart.”

Hollifield’s pick was the second turnover forced in the second half when Virginia Tech ramped up its pressure and rushed five or six players on a number of occasions.

After Deshawn McClease scampered into the end zone for a 6-yard touchdown in the middle of the third quarter to give Virginia Tech a 20-17 lead, a lead it would never relinquish, defensive tackle DaShawn Crawford found his moment on the first play of Wake’s ensuing drive. Foster brought all the linebackers on a blitz, and Crawford faked a rush before dropping back into coverage. Newman never saw him, and Crawford picked off the pass, rumbling forward for a 6-yard return.

“It’s almost as good as a fat man touchdown,” Fuente said with a grin.

“I thought I was going to score,” Crawford added with a laugh of his own.

Newman came into the game No. 7 across the country with 337.7 yards of total offense per game. On Saturday, he was limited to 16-of-35 passing for 238 yards, two touchdowns and two interceptions. The junior finished with 12 carries for minus-four yards rushing.

“I’m really proud of the kids after they came back after a real gut wrenching, tough loss from a week ago,” Foster said. “They showed a lot of perseverance in their approach all week.

The defense was aided by an offensive game plan that was executed to perfection. It was a game plan that called for Virginia Tech to control the clock and limit Wake Forest’s possessions through long, sustained drives.

That was certainly accomplished as the Hokies won the time of possession battle 36:09 to 23:51. On the first possession of the game, Hendon Hooker and Co. engineered a 19-play, 64-yard drive that ended with a field goal, but wasted 9:27 off the game clock.

“It was a part of the deal, a concerted effort,” Fuente said. “The offense is going to have to play a little bit of keepaway. That doesn’t mean run the ball into the line of scrimmage every play. It was really important that offensively you convert on third downs and keep plays going. Maybe go for it on fourth down to keep possession of the ball. It’s harder for them to score obviously if they don’t have the ball.

“The very first drive of the game, we couldn’t have scripted it any better, trying to take away the whole first quarter. To only get three points there after the dropped snap was a little disappointing, but we found our rhythm there.”

Virginia Tech’s ground game established a pulse on the game with 48 attempts for 228 yards (4.8 average). Wide receiver Tre Turner was the leading rusher with 73 yards on four carries, including a big 57-yarder on a jet sweep. His runs on the perimeter set the table for McClease and Hooker who combined for 128 yards and three touchdowns. Tight end James Mitchell even got in on the action with a 1-yard touchdown run that extended the lead to 29-17 with 11:44 left in the fourth.

“It helps you play defense,” Fuente said. “Running the football, the clock running, taking less snaps defensively, finding a way to take pressure off the quarterback. It’s very difficult to go throw the ball 50 times a game and not turn it over. I think a good running game helps everybody.”

Hooker passed the ball just 23 times, completing 15 of those passes for 242 yards. The Hokies are now 4-0 when the Greensboro native starts.

“The one reason why we all start clicking whenever Hendon is rolling is because Hendon has a swagger to him that not a lot of people have,” Turner said. “He’s communicating with everyone on the o-line, running backs, tight ends, wideouts. We’re all comfortable with him when he gets in a groove. When he gets in a groove we all know we have to step our game up.”

Could anyone have predicted that Virginia Tech would rattle off four wins and be 29 seconds away from five consecutive wins since the 45-10 debacle at home against Duke? Now, the Hokies control their destiny in the Coastal and just beat a ranked team at home for the first time since versus Miami in 2009.

“We use the term A.D.: After Duke,” Foster said. “We have really made an approach to come out and our work ethic and our practice habits are really focused on us and not anyone else. I really like the direction we’re going.”

It’s a direction that’s inspired newfound hope in the program. A direction that came to fruition on the day where Bud Foster flashed another bit of his brilliance.

“You couldn’t write a script any better in terms of honoring coach Foster and his contributions to Virginia Tech and this program,” Fuente said. “The kids on both sides of the ball played their hearts out.” 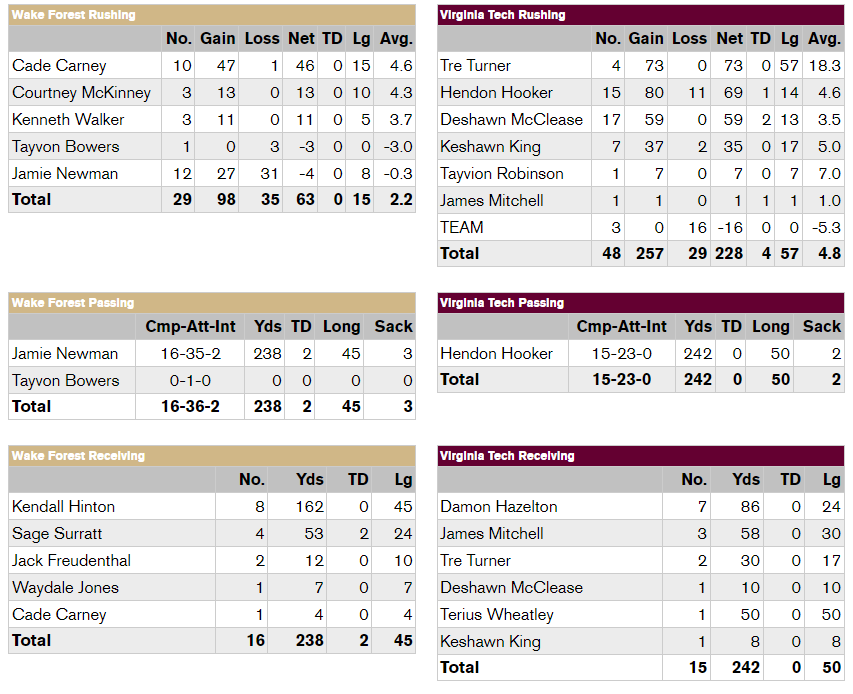