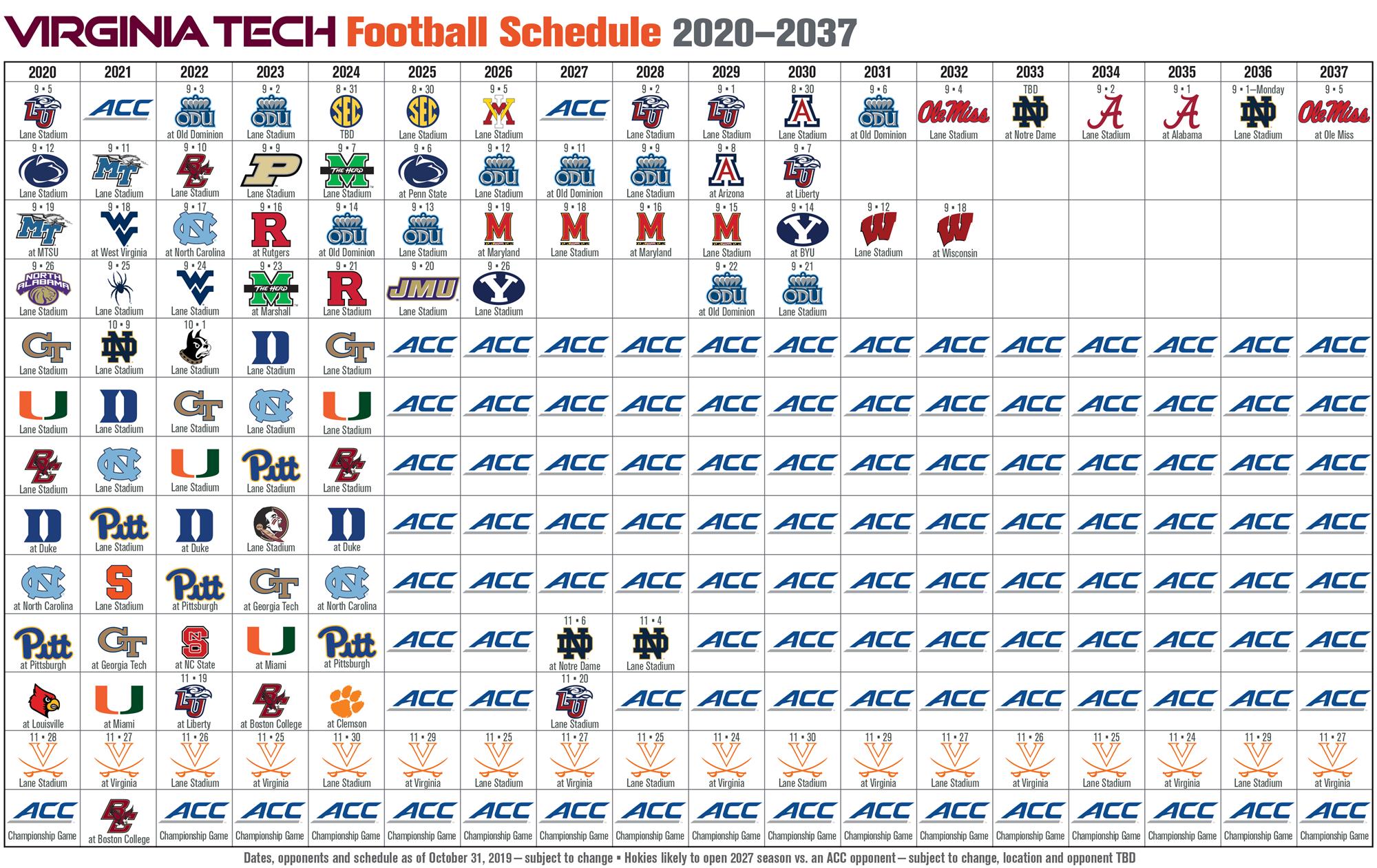 “Wisconsin approached us within the last year about moving our game dates again or potentially even cancelling our two future games. Knowing Wisconsin and Alabama could certainly pay the collective $1 million cancellation fee if they wanted to ultimately play on our dates in 2024 and 2025, we didn’t want to be left without a second Power Five non-conference opponent in those years.

“Fortunately, everyone worked together to get to our final outcome. We worked with Dave Brown of Gridiron to help identify an opportunity for us to play an SEC opponent in 2024 and 2025, then the Wisconsin contract got amended, thereby freeing up the shift, and additionally, Alabama worked with us to schedule a future home-and-home series in the out years.

“Football non-conference scheduling is definitely a unique proposition, and admittedly, some of the out years are ‘way, way out there.’ Another generation of Hokies’ will enjoy the games with SEC opponents just like we are now enjoying many of the Big Ten matchups that Jim Weaver and Coach Beamer scheduled. We’d prefer to have a schedule with marquee home opponents and other games against regional foes locked in for years down the road, giving us the ability to refine and adjust as necessary as opposed to pursuing or chasing games later. Our non-conference schedules are now essentially set through 2030 and we’re pleased with the mix of games. We’re pleased other conferences have been willing to schedule more home-and-home series.”

The Crimson Tide will visit Blacksburg in 2034 for the first time since Frank Beamer’s senior season as a player in 1969. Alabama won that contest by a 17-13 margin. Tech earned a 38-17 victory over Alabama in the 1998 Music City Bowl with Beamer as head coach. The two most meetings between the two squads took place in the Chick-Fil-A Kickoff Game in Atlanta in 2009 and 2013. Tech’s game scheduled at Alabama in 2035 will mark the Hokies first visit to Tuscaloosa since facing Paul “Bear” Bryant’s No. 1 ranked Crimson Tide in 1979.

Tech’s upcoming series with Ole Miss also features ties to Beamer’s tenure as a Tech player. The last time the Hokies and the Rebels squared off was the 1968 Liberty Bowl in Memphis. Beamer was a junior defensive back for the Hokies while the Rebels were quarterbacked by Archie Manning. Both were later enshrined in the College Football Hall of Fame. Virginia Tech will visit Oxford for the first time in 2037. The first meeting between the two schools occurred in Blacksburg in 1913 when the Hokies registered a 34-13 win. Ole Miss will return to the Tech campus in 2032.

Tech confirmed dates for a pair of contests vs. Marshall. The Hokies will travel to Huntington, W.V. in 2023 and host The Herd at Lane Stadium in 2024. The date of Tech’s 2031 contest at Old Dominion has also been moved.

Virginia Tech has also added North Alabama to next season’s home football schedule with a Sept. 26, 2020 game. North Alabama begins play in the Big South Conference in 2019 as the school enters its transitional period to the FBS level. The Lions already have a 2020 game scheduled at BYU and a 2022 contest slated at Memphis.

The addition of North Alabama to Tech’s 2020 schedule will give the Hokies seven home games at Lane Stadium for a third consecutive season. The Hokies also have 2020 non-conference contests scheduled with Liberty (Sept. 5) and Penn State (Sept. 12), along with home ACC contests against Boston College, Georgia Tech, Miami and Virginia.

Other non-conference additions to Tech’s future schedules include Wofford in 2022 and James Madison in 2025.