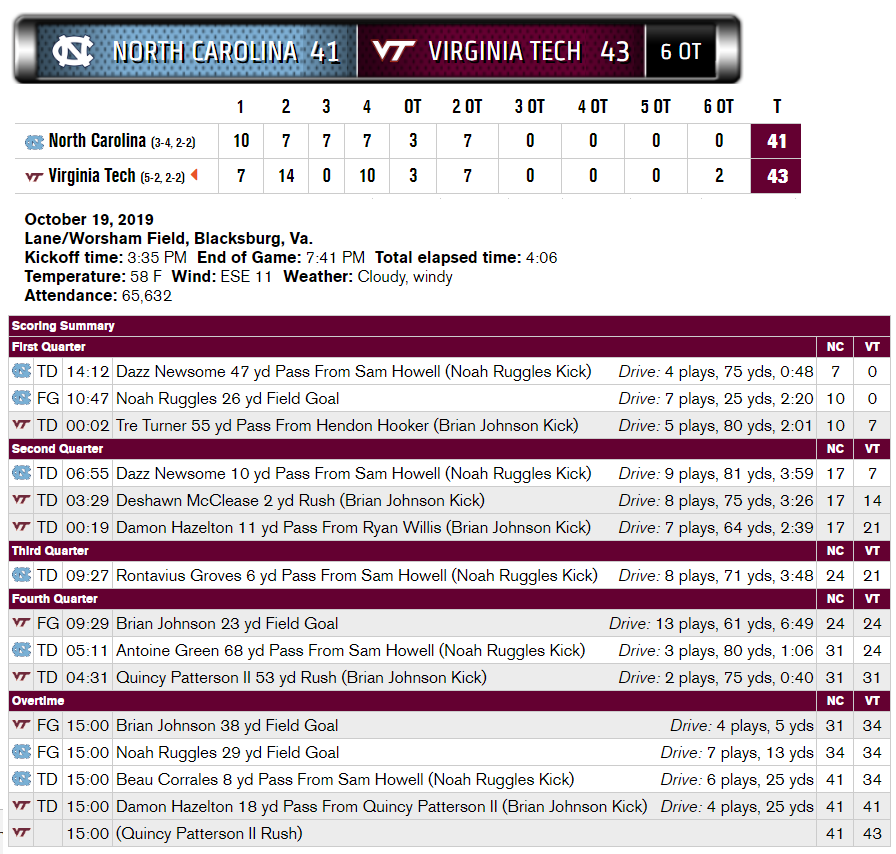 Blacksburg, VA — On a night where the Marching Virginians revived the “Stick It In” chant, it was only fitting that Quincy Patterson would indeed stick it in from three yards out for the win.

Patterson’s two-point conversion in the sixth overtime gave Virginia Tech (5-2, 2-2 ACC) a 43-41 triumph over North Carolina (3-4, 2-2 ACC) in the longest game in ACC history. It was the first time that a new NCAA rule requiring nothing but two-point conversions after four overtimes took effect in a game.

“It was definitely one for the ages,” said wide receiver Tre Turner, who caught five passes for 106 yards, including a 55-yard touchdown from Hendon Hooker for the Hokies first touchdown of the game. “I’ve never been a part of something like that. I’m just saying the whole time, ‘Just look at Lane. Just look at Lane Stadium.’”

It was one of the most gritty and resilient performances from a Virginia Tech team in recent history in front of a sold-out crowd. The team responded on every occasion, trailing 10-0 right out of the gate, 31-24 late in the fourth quarter, and 41-34 in overtime.

“From a coaching standpoint, I don’t know if I have been more proud of a group than I am of this group tonight,” Virginia Tech defensive coordinator Bud Foster said. “How they played and how they competed for 60-plus minutes. It’s all about their body of work. That’s the one thing I challenged these guys – it’s going to take everybody practicing like we play because you never know when that opportunity is going to come up.”

That opportunity certainly did arise on a number of occasions for a short-handed Hokies’ roster. Chamarri Conner and Caleb Farley both left with injuries in the game. So did Hendon Hooker toward the end of the second quarter, and Ryan Willis left a lot to be desired in relief. Lecitus Smith could not give it a go at right guard, and Dalton Keene even took over as the backup running back to Deshawn McClease. 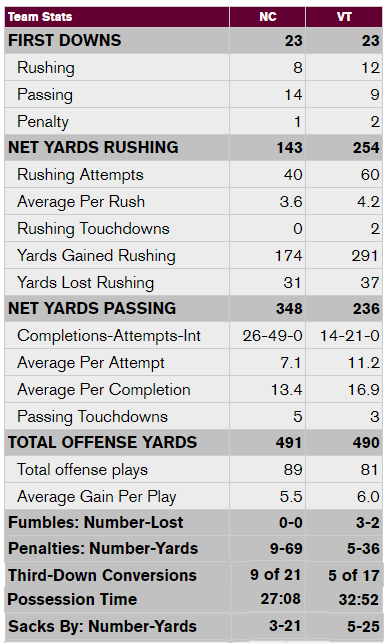 With the second quarter winding down, Hendon Hooker awkwardly hyperextended his knee (don’t click that link if you’re squeamish) on a quarterback read option. He ran one more play, then exited the game. Ryan Willis completed a third down fade pass to Damon Hazelton for the 11-yard touchdown to give Virginia Tech the 21-17 lead heading into the half.

However, Willis was largely ineffective to start the second half. After a three-and-out on the first drive, he took a sack that knocked the Hokies out of field goal range on the next possession and was instantly given the hook as Fuente decided to hand the reins of the offense to Patterson from that point forward.

Virginia Tech was limited to a run-heavy offense with Patterson behind center, but it was effective for the Hokies. Patterson ran the ball 21 times and only threw it six times, completing three.

“We had our third-team quarterback in the game,” Fuente said. “It’s going to be scaled down. It was definitely scaled down. In the same respect, at no point did I think we were going to put him back there and just run it the whole time.”

Following a reverse flea flicker where UNC freshman quarterback Sam Howell connected with a wide open Antoine Green for a 68-yard touchdown, Patterson and Co. got the ball back down 31-24 with 5:11 remaining.

Patterson connected with Tayvion Robinson for a 22-yard gain. On the next play, Patterson took the quarterback keeper to the right and burst through the hole untouched for a 53-yard touchdown to tie the game.

“Somehow I kicked in another gear,” said Patterson who ran the ball 22 times for 122 yards while adding 54 yards passing. “They missed and from there it was just clear. I knew it was a touchdown at that point.”

The game remained scoreless for the rest of regulation and called for overtime inside Lane Stadium. After exchanging field goals in the first overtime, Howell found Beau Corrales for an 8-yard touchdown on third down in the second overtime.

Three straight runs and Virginia Tech suddenly faced a fourth-and-3 situation with the game on the line. The Tar Heels stacked the box expecting Patterson to pound it up the middle, but instead he dropped back and threw a dime to Hazelton in stride for an 18-yard TD.

“Part of it is because of his threat running the football, you get some advantageous looks to throw it,” Fuente said. “It was a day one installation type play.”

“When they called the play I knew it was a touchdown at that point,” Patterson said. “It’s something we practice all the time. Something coaches see and they were comfortable calling that.”

In overtime No. 3, the Hokies went three-and-out and Brian Johnson promptly missed the 41-yard field goal. North Carolina gained a first down on its drive, but a holding penalty pushed the Tar Heels back.

Noah Ruggles took the field for a 35-yard field goal attempt, and he was double-iced, first by his own head coach Mack Brown, then by Fuente. Ruggles’ kicked sailed wide right and the game drifted into a fourth overtime.

“If they would have made one more field goal, I’d still feel the same way about our team,” Fuente said. “If it would have gone the other way, I still would have been up here talking about how proud I am of our guys and their ability to battle.”

Jermaine Waller blocked Ruggles’ field goal attempt in the fourth overtime, setting up the chance for Brian Johnson to be the hero. Instead, Brown iced Johnson, and his 42-yard field goal was wide right to keep the score 41-41.

From that point the kickers were able to hang up their cleats because for the first time this year, the new overtime rules came into effect. In the offseason, a new rule was added where teams rotate two-point conversion attempts from the 3-yard line to determine a winner, beginning with the fifth overtime.

“At that point it was life or death,” Turner said. “It was really a sudden death situation.”

It’s an odd rule that left many of the fans, sportswriters, and even players baffled at what was about to occur.

Virginia Tech’s attempt in the fifth overtime fell incomplete. Howell took the field three yards away from the win. He faked the run up the middle and pitched to Michael Carter on the outside. Khalil Ladler snuffed it out from the get-go, tackling Carter behind the line of scrimmage and forcing overtime No. 6 in the process.

“I knew I had to have the back and I couldn’t let him get outside,” Ladler said. “I knew where my help was, so I just tried to force him back inside to all of my help. Credit to the other guys. I made the play, but it was a team effort.”

On North Carolina’s attempt in the sixth overtime, it was again Ladler to the rescue as he sacked Howell in the backfield while scrambling around trying to find an open receiver. It was another integral play for the whip/nickelback who’s seen his playing time reduced this year with the emergence of Conner.

“Lad took advantage of that opportunity,” Foster said. “I couldn’t be more proud of a guy. He’s battled some things. He played a lot more last year and he’s got a different role this year. He stepped up big on our football team and that’s a credit to him and his belief in us.”

Four hours and six minutes after the start of the game, Patterson and the offensive line outmuscled the North Carolina front as he plunged forward for the 2-point try to cap a historic game.

“It was really just an outside zone play,” Patterson said. “Quarterback keep all the way. I’ve seen the hole, cut up. It couldn’t really get any easier. I really don’t know how I felt. It’s like an out of body experience.”

The future for Quincy Patterson remains uncertain, but it’s the type of game that fans will recall his heroics and the team’s fortitude for years to come.

“It was just so many overtimes,” McClease said. “What was it, five? Six.”

McClease’s laugh said it all. At the end of a wacky, zany, and historic six-overtime game, it’s all you can do. 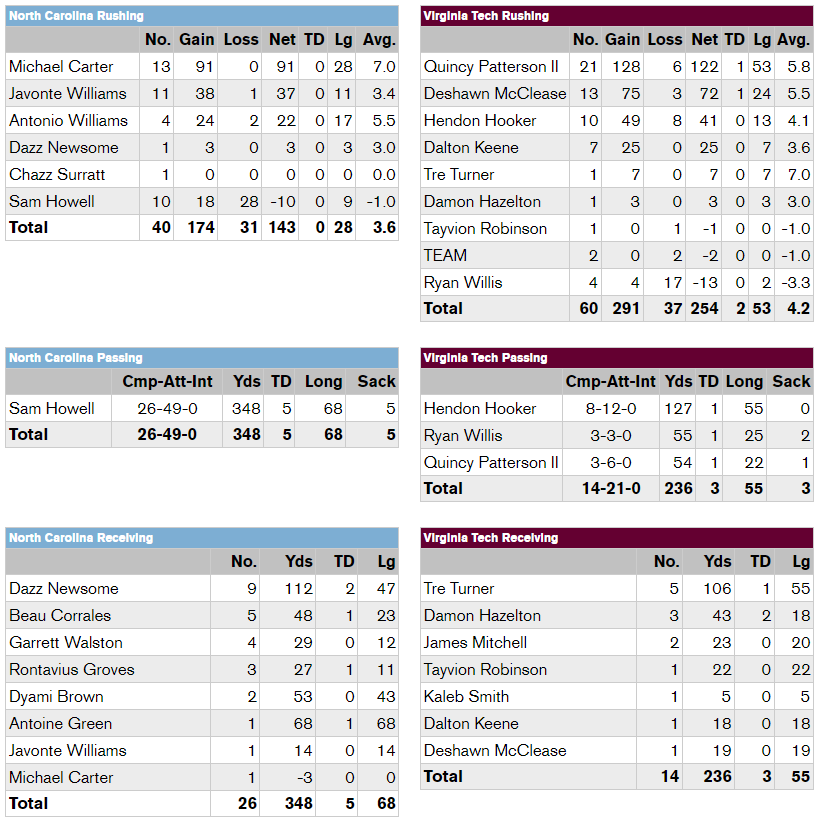