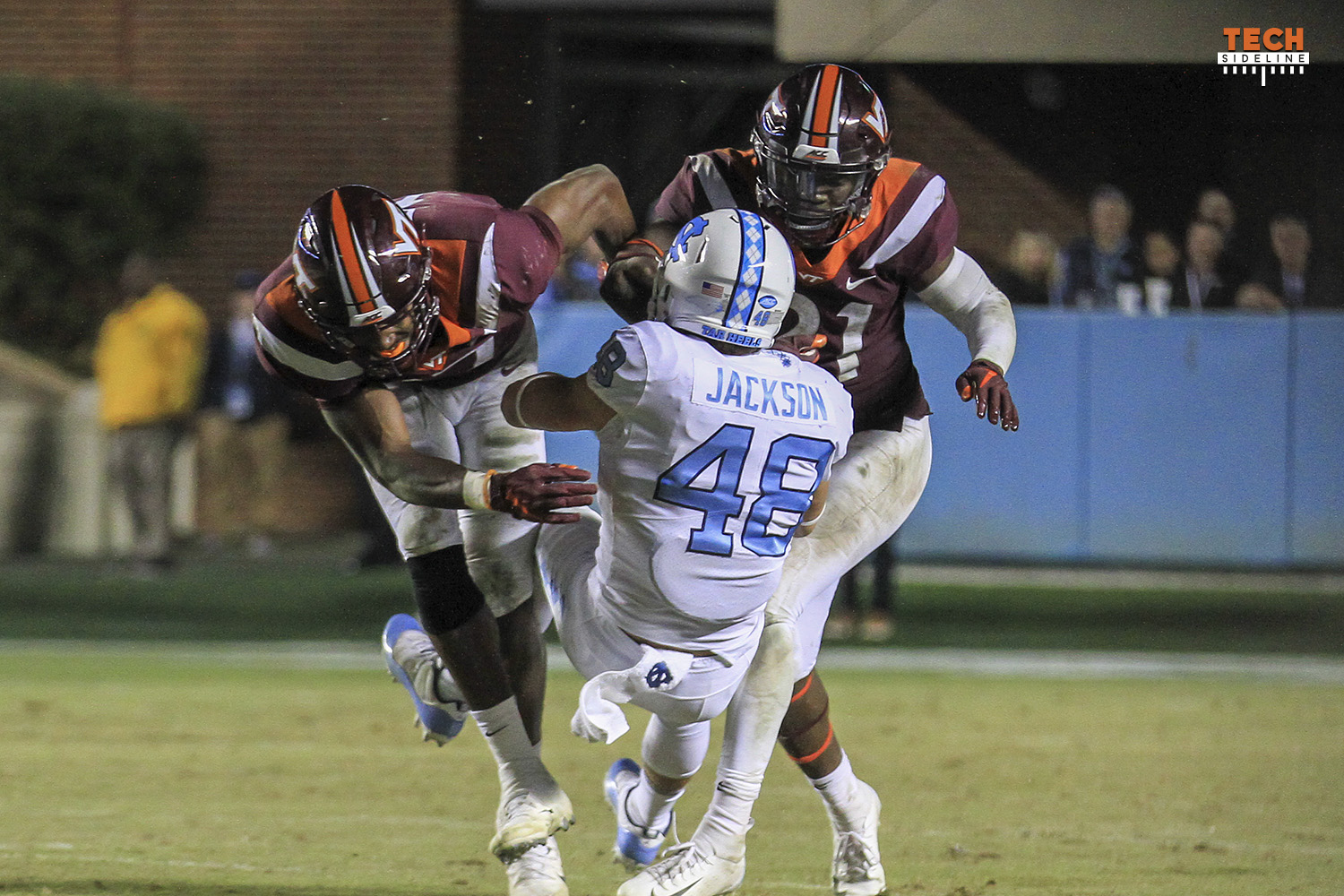 Virginia Tech will look to win its third consecutive game when the North Carolina Tar Heels visit Blacksburg on Saturday afternoon.  This game could have major implications on the Coastal Division race.  Or not.  As up and down as the division has been through mid-October, it’s very tough to predict what is going to happen over the final six games.

What we do know is that the Tar Heels are 3-3, but they are 3-3 against what has been a pretty tough schedule thus far.  Here are their results…

South Carolina: 24-20 win over a team that beat Georgia
Miami: 28-25 win over a Miami team that has talent and that just beat UVA
Wake Forest: 24-18 loss to a 5-1 Wake Forest team
Appalachian State: 34-31 loss to an unbeaten team
Clemson: 21-20 loss to the defending National Champs
UNC: 38-22 victory over Georgia Tech

That’s a tough schedule so far, from a talent perspective.  On the other side of the coin, South Carolina is just 3-3 despite their win over Georgia, and Miami is only 3-3 despite their talent level on defense and wide receiver.  Wake Forest is 5-1, but they just gave up 60+ points to Louisville and don’t have as much talent as the Heels, while Appalachian State is a Sun Belt team.

Still, if you’ve watched them play, you know that the Tar Heels are a capable team.  They have improved on both sides of the ball, and it’s been one player in particular who has made them better offensively.

Sam Howell was a highly-touted recruit who decommitted from Florida State to sign with the Tar Heels, and thus far he’s been everything that the UNC coaching staff hoped he would be. Here are his numbers for the year…

There are a couple of bad pass defenses in there, but also a couple of solid ones, and an elite one.  Let’s look at his numbers in those three games…

He managed to navigate those three defenses without throwing a single interception.  Two of his three interceptions came in UNC’s home loss to Appalachian State, while his third came against Georgia Tech.  Of course, he also put up 376 passing yards and four touchdowns against the Yellow Jackets as well.

Howell is a legit quarterback, and you can see why he was highly-recruited.  He would be even better behind a good offensive line, and that’s probably where the Tar Heels are the weakest on offense.  They are coached by former Virginia Tech offensive line coach Stacy Searels, who coached with Mack Brown at Texas from 2011 through 2013.  Searels has also coached at Georgia, Miami and LSU, which looks great on his resume.  However, he hasn’t put a particularly good offensive line on the field in nearly a decade.

For the season, North Carolina has allowed 3.33 sacks per game, which ranks No. 118 out of 130 FBS teams.  Of course, sacks aren’t always the fault of the offensive line, but still, this group seems to be the weak link of the offense.  Run blocking leaves a lot to be desired as well, and could be the part of the offense that is holding back the group as a whole.  Pro Football Focus grades offenses in five different categories, and here’s how the Tar Heels grade out…

Run blocking is the hardest thing to do in football, but still, that’s quite a drop off.  As a comparison, Virginia Tech has a run blocking grade of 60.0, which is quite a bit higher.  The Hokies rank No. 9 out of 14 ACC teams, while UNC is No. 12.

Despite the bad run blocking, North Carolina has two of the best running backs the Hokies will face this season.

Both Williams and Carter get equal playing time, and they are both very dangerous players.  Williams in particular has shown an ability to break tackles this season.  He averages 4.4 yards after contact per rushing attempt, which ranks second in the ACC.  He’s not necessarily a creative rusher, as only 8.3% of his runs go through a different gap than the one for which the play was originally designed, but he hits the hole hard and breaks tackles.  In fact, he forces a missed tackle a whopping 35.1% of the time.  As a comparison, Deshawn McClease forces a missed tackle 15.2% of the time.  The ACC average for backs with 150+ snaps is 27%.

Both Williams and Carter can be major threats in the passing game as well, and they’ll challenge Virginia Tech’s safeties, linebackers and cornerbacks to tackle them in space.  Those two backs will be Tech’s biggest challenge in space so far this season, and it’s not even close.

On that note, Virginia Tech’s receivers haven’t exactly been trustworthy, either.  Damon Hazelton’s drop rate is at 30%, worst in the ACC, though that’s a small sample size.  Tre Turner is at 20%, with Kaleb Smith at 11.1%.  Perhaps the team whose wide receivers take a step forward this week will be the winner.

Sam Howell is going to get his yards.  The following sentence has been written in every Virginia Tech game preview since the dawn of time: The Hokies need to slow down the running game and make the offense one dimensional.  One other note…Devon Hunter, who is replacing Reggie Floyd at rover (targeting suspension for the first half), better be ready, because UNC is going to go right after him.

North Carolina’s defense has not been a strength this year, though they seem better than they were a year ago.  Before we get into the specifics, here are the national rankings…

The Tar Heels changed defensive schemes in the offseason, with Tommy Thigpen and Jay Bateman serving as co-defensive coordinators.  UNC basically runs a 50-scheme these days, with three down linemen and four linebackers.  Of course, like any other front these days, a walkup defensive end can mean that the differences between a 4-3, 3-4 and 4-2-5 can be quite subtle.

The player on defense that could potentially cause Virginia Tech the most trouble is nose tackle Aaron Crawford (6-2, 290, Sr.).  Crawford is a Norther Virginia native (Stone Bridge High School) who didn’t do much with his career until this season.  He had 6.5 tackles for loss and four sacks in his first three seasons, but this year he has 6.5 tackles for loss and three sacks in just the first three games.

Per Pro Football Focus, Crawford has the highest run defense grade (90.1) of any ACC defensive tackle this season.  As a nose guard, he’ll be lining up directly across from true freshman center Bryan Hudson, who is rated as the ACC’s third-worst run blocking center.  That’s not a matchup that bodes well for the Hokies, so don’t expect a lot of rushing success right up the middle.  That’s probably not an attackable area for the Virginia Tech offense.

Fortunately the Tar Heels have a weakness of their own that the Hokies should be able to exploit.  Free safety Myles Dorn (6-2, 205, Sr.) is rated as the ACC’s worst safety by Pro Football Focus with a rating of 49.4.  He’s particularly weak in coverage, with a rating of just 44.3.  Linebacker Jeremiah Gemmel (6-1, 228, So.) has been nearly as bad with a 50.9 rating.

UNC lost starting safety Myles Wolfolk for the season after four games to a “lower body injury.” (See…just about every team guards their injury information these days.)  That’s a big loss, because the former Virginia Tech commit was a very consistent player for the Tar Heels earlier this season.  If you recall, he decommitted from Virginia Tech as questions rose about Frank Beamer’s impending retirement.

The other name you may recognize is outside linebacker Tomon Fox (6-3, 260, Jr.).  Virginia Tech began recruiting Fox shortly after Justin Fuente was hired, and he took a visit to Blacksburg.  However, the Tar Heels had been recruiting him for a long time, and he chose the more familiar school on Signing Day.  He has 5.5 tackles for loss so far this season, and he leads the team with four sacks.  With Wolfolk out, Fox will likely be UNC’s second-best defensive player.

You’ll also recognize inside linebacker Chazz Surratt (6-3, 240, Jr.).  UNC’s former starting quarterback made the switch to linebacker in the offseason, and he leads the Tar Heels in tackles with 46.  He also has 5.5 tackles for loss and three sacks.

There are good players on UNC’s defense, and as a whole this group has improved a lot from last season.  However, there are still some weak spots, and if Tre Turner is back healthy combined with Damon Hazelton, the Tar Heels are also attackable through the air on the outside.

North Carolina’s games against similar competition usually end in the 20s.  They lost to Clemson 21-20.  They beat South Carolina 24-20, and Miami 28-25.  They would have held Appalachian State to the 20s, most likely, were it not for two turnovers.  Their game against Wake Forest was 24-18.

This is an improved UNC offense, but they don’t seem likely to strike an improved Virginia Tech defense for 30+ points without the help of turnovers.  Likewise, the Hokies don’t seem like they’ll score 30+ without the help of turnovers.  Turnovers are unpredictable, so throwing them out the window, this really seems like a game that is going to end 20-something to 20-something.

Who is going to win?  I don’t know.  Results around the Coastal Division seem so random that studying each game closely and trying to make a detailed, educated prediction seems to be an exercise in futility.  I think the Tar Heels are better, on balance, but I also don’t think we quite know what the real Virginia Tech looks like with Hendon Hooker at quarterback, and we certainly don’t know what the Hokies will look like with Hooker, Hazelton and Turner all on the field together.

I’ll go Carolina in a close one, as much as it pains me to do it.

Will Stewart’s Take:  To say that this game is a critical turning point in the season isn’t overstating it. Coming out of this, the Hokies are either going to be 5-2 (2-2 ACC) and in the thick of the division race … or they’re going to be 4-3 (1-3 ACC) with only one decent win (at Miami) and pretty much out of the Coastal race.

ACC opponents are averaging 38.3 points per game against the Hokies in three games so far:

Virginia Tech’s turnover advantage against Miami was 5-0 … and yet Miami still scored 35 points. The Tar Heels have better quarterback play than the Canes, more dynamic players than Duke, and a better overall offense than Boston College. I think it’s unlikely that UNC will come in below 30 points. It’s the ACC Coastal, so you never know, but the body of work so far says the Heels will go for 30+.

This puts the pressure on the Virginia Tech offense to not turn it over and to be efficient. Under Hendon Hooker, they have done both, with zero turnovers in two games, 12 scores (including 10 TDs) on 21 possessions, and 11 of 11 scores in the red zone (including nine TDs). The Hokies have averaged … wait for it … 38 points with Hendon Hooker as the quarterback. Admittedly, it’s a limited sample size.

This game is pretty much a tossup, with turnovers, special teams, and/or mistakes likely to be the difference. Vegas has UNC as a 3.5-point favorite, and while that line is set to influence betting, not predict a score, I think that’s fairly accurate. I give UNC the edge, as much as I hate to, but not by much. I predicted UNC to win 42-30 on our podcast, but I’m going to dial that back a bit.