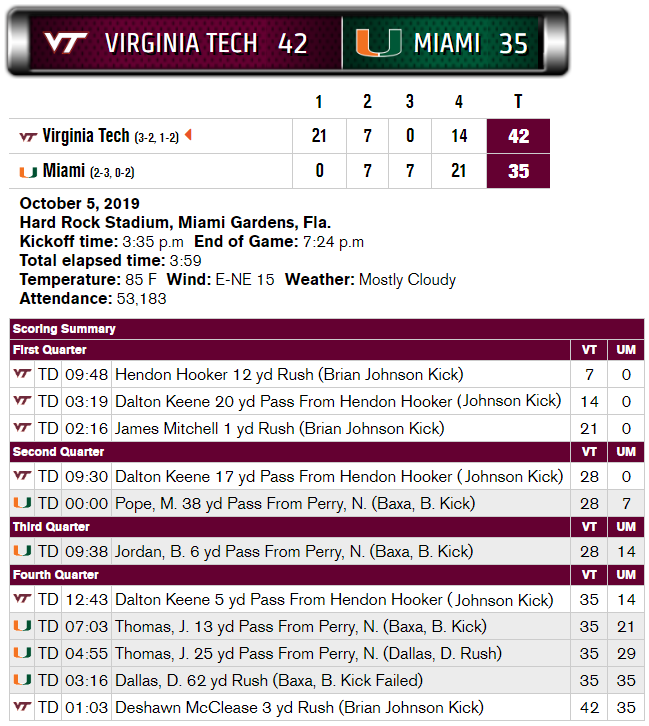 Virginia Tech forced five Miami turnovers and sacked Hurricane quarterbacks seven times, while Hendon Hooker made key plays in his first career start, as the Hokies went to south Florida and came away with a critical 42-35 win in a game that had just about everything.  Tech improved to 3-2 overall and 1-2 in the ACC with the victory, while Miami dropped to 2-3 and 0-2.

Coming off a 45-10 home loss to Duke, everything about the program was questioned in the last week.  After a demanding week of practice, the Hokies jumped on Miami from the opening drive when quarterback Jarren Williams was picked off by Jermaine Waller on a ball tipped by Chamarri Conner.  Tech cashed in the turnover when Hooker ran it in from 12 yards out, and that opening sequence was an early indicator of the storylines that would come out of Saturday’s game: turnover margin and Hendon Hooker.

The Hokies have been a poor team when it comes to turnovers this year, ranking No. 128 out of 130 teams in turnover margin, while Miami ranked No. 6 in the same category.  Yet in this game it was the other way around, with Tech forcing five Hurricane turnovers and picking off Miami quarterbacks a total of four times, while not committing a turnover of their own.  The defense also registered seven sacks, including 1.5 from defensive end Jaylen Griffin.

Offensively, Tech went with redshirt sophomore Hendon Hooker, who had only thrown two career passes.  They ran plenty of read options and designed creative plays to get their tight ends involved.  Hooker didn’t dominate through the air, but he was 10-of-20 for 184 yards and three touchdowns, while he also rushed for 76 yards and another touchdown on 13 carries.  Tight end Dalton Keene had five receptions for 73 yards and three touchdowns, while James Mitchell had three receptions for 75 yards, plus a rushing touchdown.

As a team, the Hokies ran for 153 yards, while Miami ran for only 96.  Tech jumped out to a 28-0 lead, putting Miami in obvious passing situation.  The ‘Canes gained a whopping 563 yards of offense, including 469 through the air, but it took them 55 attempts to get there and came at the expense of four critical interceptions.

Those Miami turnovers were very important to the outcome of the game, so let’s recap them…

Turnover No. 1: Tech intercepted Jarren Williams, and then drove 48 yards for a touchdown.

Turnover No. 2: Williams was intercepted again, this time in the endzone by Caleb Farley.  The turnover possibly cost Miami points, though the Hokies were forced to punt on their next drive.

Turnover No. 3: Williams threw into coverage, this time to Jermaine Waller, who returned it to the Miami 23.  The Hokies drove 23 yards for the touchdown to make it 14-0.

Turnover No. 4: Mike Harley fumbled at Miami’s own 20, and the Hokies recovered.  They drove 20 yards for another touchdown.  Those first four turnovers came on Miami’s first four drives  of the game.

Turnover No. 5: Trailing 28-0, Miami drove it all the way to the Tech four yard line where they went for it on fourth down.  N’Kosi Perry, who at this point had entered the game in place of Jarren Williams, was intercepted by Caleb Farley.

Some turnovers are critical and some aren’t, but all five Miami turnovers were critical because they gave the Hokie offense a short field, or they ended potential Miami scoring drives deep in Tech territory. 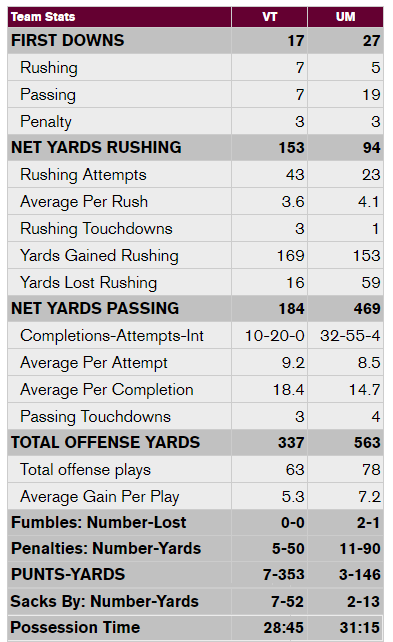 After Miami’s turnover fest, the Hokies were up 28-0.  It seemed as if Tech had this one pretty well sewn up.  That’s when things started to get crazy.  On the last play of the first half, the Hurricanes threw up a Hail Mary from midfield that was batted in the air and landed in the hands of wide receiver Mark Pope in the endzone for a touchdown.  It was a fluke play, but it gave Miami some momentum heading into halftime, trailing by 21 rather than 28.  The ‘Canes added a touchdown in the second quarter on a short pass to Brevin Jordan to reduce Tech’s lead to 28-14, and things got a bit tense.

However, the Hokies responded by driving 80 yards in just four plays, with Hooker hitting Keene for a five-yard touchdown to make the score 35-14 with 12:43 remaining in the game.  As poor as the Miami offense had been all day, that seemed like a comfortable lead.  However, it wasn’t, as the ‘Canes ran off three touchdowns to tie the game at 35 with 3:16 remaining.  There was plenty of craziness on Miami’s final two touchdowns.

Trailing 35-27, Miami head coach Manny Diaz surprisingly elected to go for a two-point conversion, which was successful, making the score 35-29.  That means another Hurricane touchdown and extra point would give them the lead.  They got the touchdown, but not the extra point.  In a game filled with twists and turns, kicker Bubba Baxa’s extra point bounced off the upright, keeping the score tied at 35.  The ‘Canes also committed an unsportsmanlike conduct penalty on their final touchdown play, which meant that they had to kick off from their own 20-yard line.

Virginia Tech turned that mistake into good field position, with true freshman Keshawn King returning it 28 yards to the Tech 37.  That’s when Hendon Hooker turned in the most important drive of his career to date.  First he hit Damon Hazelton on a perfectly thrown fade down the sideline for a 29 yard gain to the Miami 34.  Two plays later, on third and five from the Miami 29, he perfectly executed a throw back pass to Dalton Keene for a 26 yard gain to the Miami three yard line.  Hooker and the entire offense went right, while Keene snuck through the defense from right to left and was wide open for the easy competition.

From there, Deshawn McClease punched it into the endzone, making the score 42-35 Virginia Tech with 1:03 left.  Of course, the drama wasn’t over.  The Hurricanes still had a timeout left, and they drove downfield against a Tech defense that was going with a three-man rush and dropping everyone else back into coverage.  Perry hit KJ Osborn for a 16 yard gain to the Tech 20 on the key play of the drive, and redshirt freshman defensive end Jaevon Becton was flagged for illegal hands to the face on the play, giving the ‘Canes the ball at the Tech 10 with just five seconds remaining.

On first down, Perry’s pass was incomplete and batted away by Reggie Floyd, and the clock appeared to run out.  The officials seemed to start running off the field, and the coaches prepared to walk to midfield for the postgame handshake, as ESPN quickly switched over to the Georgia-Tennessee game.  However, what many of us didn’t know until well after the game is that the officials added one second to the clock, giving Miami one more chance at the win.  Perry’s pass was knocked away by redshirt freshman linebacker Alan Tisdale on a play that was not televised, and that some Tech fans still do not realize even happened.  This time the game was over for real, and Virginia Tech could celebrate.

Here's the final play from the #Hokies win over Miami. After ESPN cut away, the referees put another second on the clock and this is a play that followed that. pic.twitter.com/rFIH2WpN3G

A week ago at this time, it seemed as if the Hokies were down and out, but they fought their way off the mat and came away with a huge road win over a major rival.  They’ll face FCS opponent Rhode Island, who is just 1-4 on the season, next Saturday in Lane Stadium.  Kickoff is set for 4pm, and the game will be televised by The ACC Network. 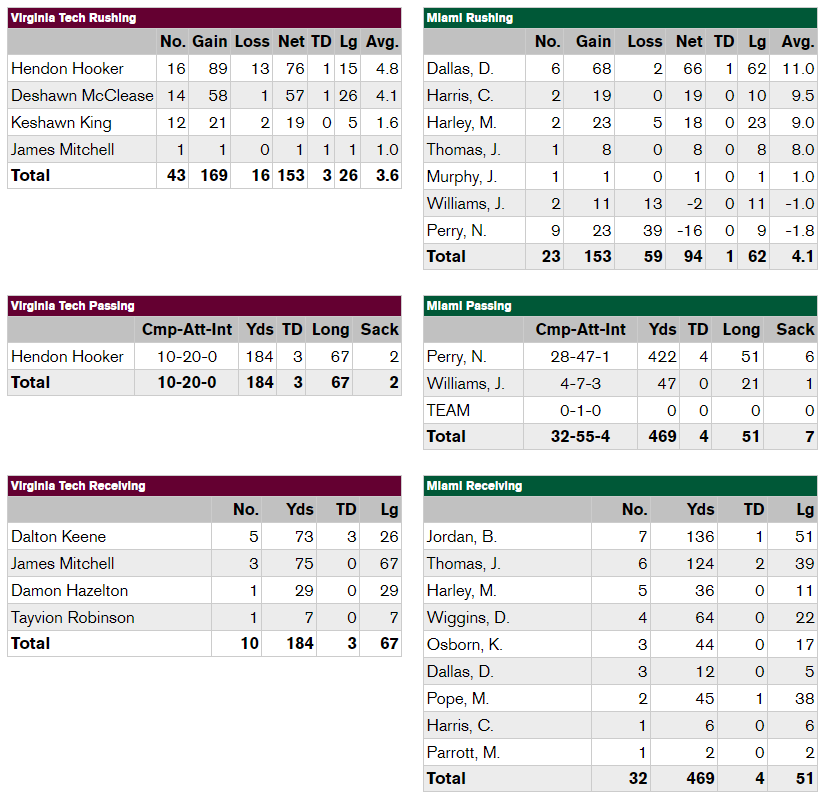