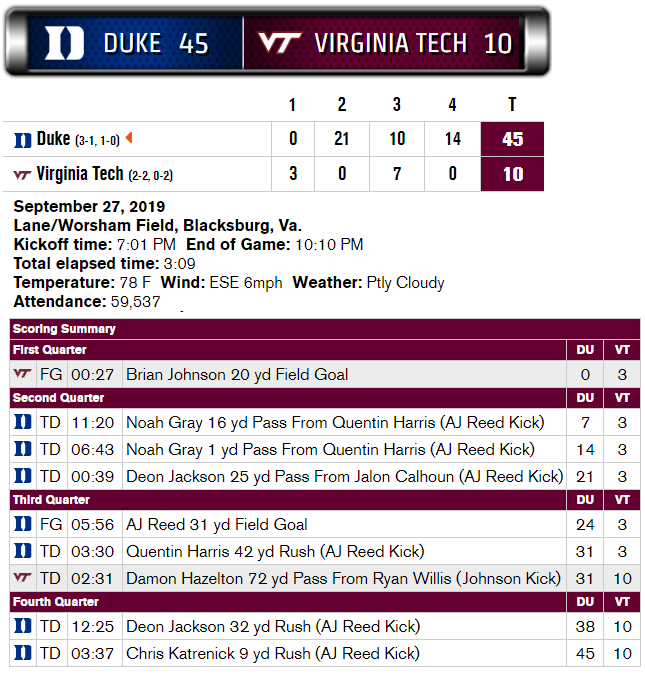 Blacksburg, VA — Things may not have been going 100 percent according to plan early on, but Virginia Tech still was controlling all portions of the game. 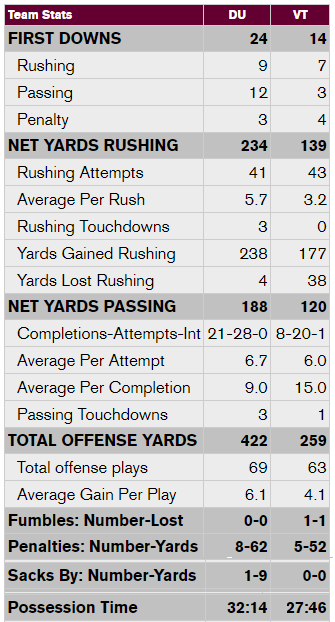 The Hokies’ defense came out sharp and was stingy, holding Duke to just eight yards on 10 plays into the second quarter. The special teams made three big plays with two Oscar Bradburn punts being downed inside the 10-yard line and a shifty 25-yard punt return from Hezekiah Grimsley.

The offense certainly wasn’t a thing of beauty, but Virginia Tech led 3-0. Suddenly, it all came crashing down as the wheels fell off.

Hoping to jumpstart the offense, Justin Fuente inserted Hendon Hooker into the game at quarterback along with freshman tailback Keshawn King. Five plays later, a botched exchange between Hooker and King caused the ball to come loose and the Blue Devils recovered, allowing them to breathe life again after the air had been choked out of them throughout the whole first quarter.

“As the quarterback, I take full responsibility in that situation on the handoff,” Hooker said. “Just try to move forward.”

Immediately, Duke’s Quentin Harris connected with tight end Noah Gray for a wide open 16-yard touchdown after a pump fake to a screen pass drew all the defenders in.

“It seemed like that turnover and how that next play just took the wind right out of everything, out of the energy in the stadium it seemed like,” defensive coordinator Bud Foster said.

“Obviously, we are not ready,” head coach Justin Fuente said. “We are not at the point where we can compete and play and have a chance to win against that team we played tonight. That’s my responsibility and my fault. I do believe in our group. I’ve got to find a way to get more out of them.”

After starting the game 2-of-6 for five yards, Harris began to look like a David Cutcliffe-coached quarterback. The senior engineered a 9-play, 67-yard touchdown drive capped off by another touchdown pass to Gray, this one from one yard out. On the next drive, the Blue Devils showed some ingenuity – something Virginia Tech’s offense could have benefitted from – by using a double pass to wide receiver Jalon Calhoun behind the line of scrimmage, who then connected with Deon Jackson all by himself for a 25-yard touchdown.

What once looked like a competitive ACC affair now became a 21-3 halftime deficit for Virginia Tech. Harris added a 42-yard touchdown on a quarterback keeper in the second half to finish the game with three touchdowns (two passing, one rushing) on 20-of-27 passing for 163 yards plus 100 yards rushing.

“We didn’t respond to adversity really well,” Foster said. “That’s one thing that we’ve really talked about… You have to give Duke credit. They hit us on a couple gadget plays. We’re a gap-controlled defense and we busted on their two long running plays.”

Willis and Co. started drives from midfield and Duke 40-yard line on back-to-back possessions in the first half, yet only mustered three points.

Those three points came after the Hokies were stuffed on three straight runs inside the 6-yard line on a drive that actually could have ended with an interception in the end zone if not for a roughing the passer penalty. Add in three three-and-outs, two turnovers, and it was a recipe for disaster.

The Virginia Tech offense never developed any rhythm throughout the game and looked lost on occasions. Shallow crossing routes and jet sweeps that had become a feature of the offense were snuffed out over and over.

The Hokies continually attempted to run the ball up the middle, but were largely stopped at the line of scrimmage, rushing the ball 43 times for 139 yards (3.2 avg.). That included a 45-yard rush from Deshawn McClease, who ended the game with 17 rushes for 102 yards. Take away that one big play, however, and it decreases the yards per carry average down to 2.2.

Credit can be given to the Duke defensive front, one that only allowed 3.5 yards per carry in a week one loss against No. 1 Alabama, but the Hokies made no adjustments to showcase any semblance of a rushing attack. There’s was even a stark imbalance as Virginia Tech ran the ball 43 times and only passed 20.

The one bright spot was Willis’ 72-yard touchdown bomb to Damon Hazelton, who played in his first game this year after missing the first three with a hamstring injury. Willis was just 7-of-18 passing for 112 yards, one touchdown, and one interception.

Meanwhile, Hendon Hooker was 1-of-2 passing for eight yards along with four carries for 13 yards, not including the 24-yard loss that was credited to him on the fumble. With both Willis and Hooker dealing with various health concerns, Fuente explained that it was part of the game plan to manage the workload between the two of them.

“It’s several factors,” Fuente said. “Some of it has been play-based. Hendon has worked hard and deserved a chance to play. Ryan hasn’t always been as consistent as we want. Both of them are dealing with health issues. We’re trying to split the time a little bit for those guys and maybe lessen the load a little bit was what we were trying to do.”

All of it points to a larger problem that is stirring in the program and heading toward dangerous territory. The Hokies are now 0-2 in the ACC for the first time in program history. They’ve also lost three straight night games inside Lane Stadium, dating back to last year. And this performance comes on the heels of a bye week where the team had 13 days to prepare.

The 35-point dredging is the biggest loss inside the confines of Lane Stadium since a 49-12 defeat at the hands of Houston in 1974. It is the largest home loss since the Hokies entered the ACC. So how does the team respond moving forward?

“I hope there’s disappointment,” Foster said. “You want [the players] to hurt. We’ve gone through a lot of success here, but it didn’t start out that way. We had to come in and roll up our sleeves every day and fight through some really tough times when there’s naysayers and people questioning what you do.

Virginia Tech will travel south to face Miami next Saturday at 3:30 p.m. The Hokies will be looking to avoid an 0-3 start in conference play. 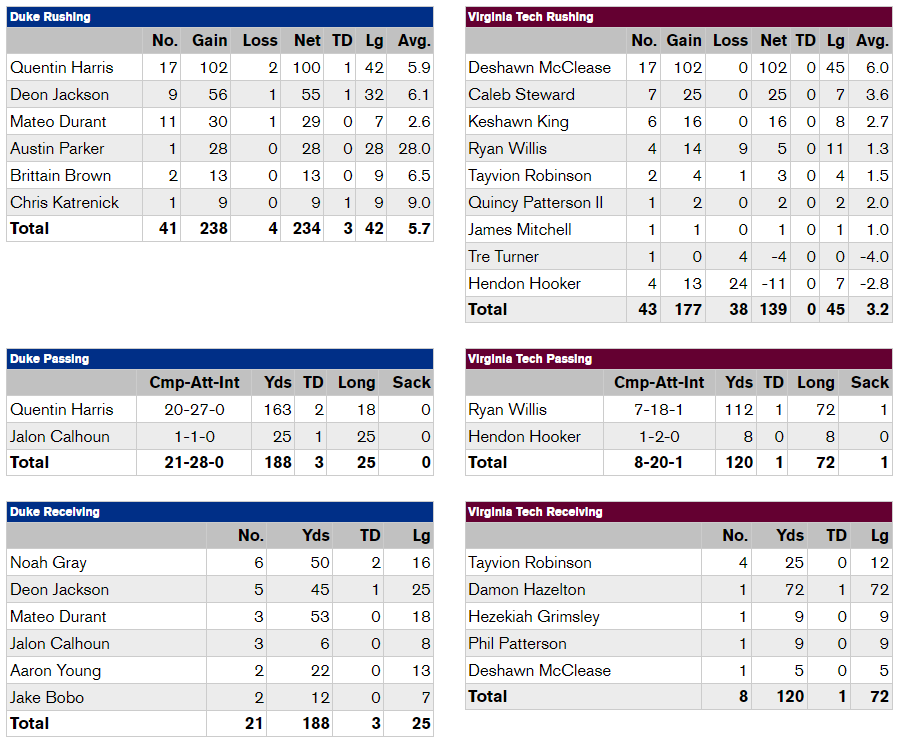