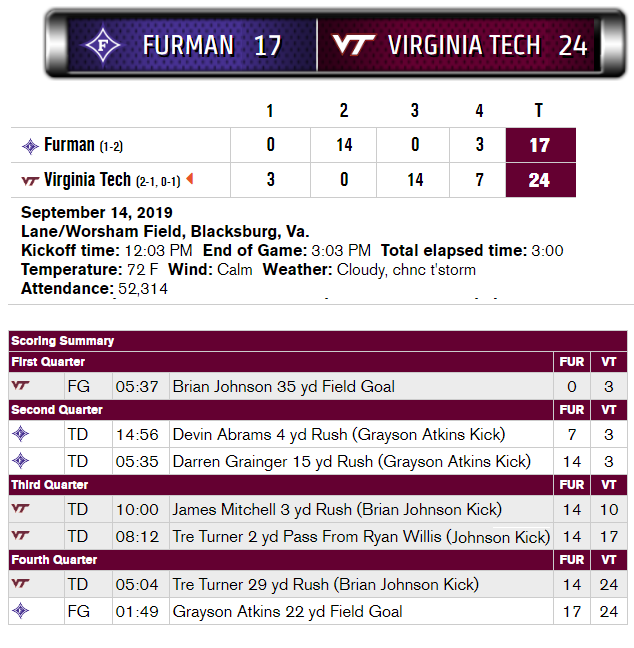 “I know we won that, but it doesn’t feel like it.”

That was a comment uttered by a Virginia Tech fan while walking down the stairs at the south tower, and it echoed a popular sentiment shared by the 52,314 fans in attendance at Lane Stadium.

The Hokies (2-1) survived Furman’s (1-2) upset bid, coming back from a 14-3 halftime deficit to win 24-17. The word survived should never be used to describe a game against an FCS opponent, but that was the case on Saturday.

“I’m glad we don’t play anybody next week,” head coach Justin Fuente said during the postgame press conference. “Lots to work on… At halftime, I thought we responded.”

Self-inflicted miscues were the name of the game in the first half for Virginia Tech. There were three false starts, an illegal formation, plus a Tre Turner fumble and Ryan Willis interception that led to Furman’s two touchdown drives in the first half, one of which was extended by Jarrod Hewitt’s offsides penalty on fourth-and-1. 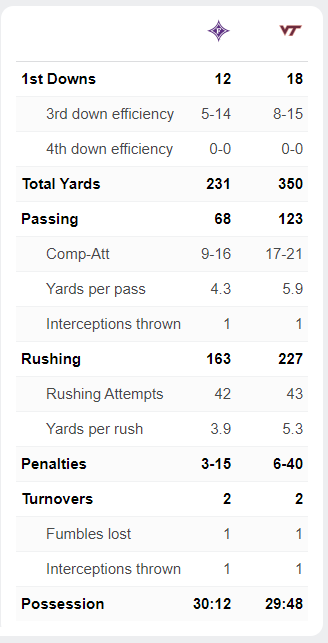 The offense appeared inept in that first half because of those miscues, scoring just three points against the same defense that allowed 48 points last week to Georgia State, who finished 2-10 in 2018.

As the half was winding down, Brian Johnson trotted onto the field to attempt a 50-yard field goal attempt.

The ball hit off the upright and dropped to the ground. As such, the play was a metaphor for Virginia Tech’s first half, encapsulating the dead mood that had drifted inside Lane Stadium.

It begged the question if whether or not a number of changes were going to be made following intermission.

“You play through all those ideas in your mind,” Fuente said. “I told the whole team at halftime… we have control over how this goes. We can hang our heads and sulk, or we can stand up and go compete and do our best to rectify what happened in the first half.”

The Hokies did come out more focused in the second half and forced a punt on the Paladins’ first drive. Then, freshman tailback Keshawn King asserted himself into the game, busting off runs of 15 and 54 yards on back-to-back carries.

“I told [the offensive line] to go hard, get to the second level, move the backers out the way, and they did exactly what I said,” King said. “It got the results… It obviously got the team going.”

King finished the game with 12 carries for 119 yards, becoming just the third 100-yard rusher for Virginia Tech in the last 16 games.

“That kid is a man,” Willis said. “He really gave us a spark in the second half.”

James Mitchell capped off the drive by finding pay dirt on a 3-yard jet sweep. Virginia Tech carried the ball on all six plays of the drive for 83 yards.

On the very next play from scrimmage, Chamarri Conner attacked running back Devin Wynn in the open field as Dax Hollifield punched the ball away, with Conner dragging Wynn to the ground. DaShawn Crawford recovered for the Hokies to continue the swing of momentum back in their favor.

Conner played his best all-around game from the whip/nickel back position, finishing with eight tackles, a sack, and another quarterback hurry.

“I was kind of waiting for him to kind of come out of his shell a little bit… He came out of that today,” defensive coordinator Bud Foster said. “It was good to see him have some success and be the playmaker that I know he can be.

“That’s what that position demands. When we’re really good on defense, our nickel position is a playmaking spot. You guys have seen that in the past, and that’s hopefully what he’s going to continue to do.”

Four plays later Willis connected with Turner for a 2-yard fade in the corner of the end zone to regain the lead, 17-14, for Virginia Tech in the third quarter.

Later in the fourth quarter, ‘Big Play Tre’ made his mark on the game again. After Willis took a crushing blow to the ribs and got the wind knocked out of him, Hendon Hooker entered the game and handed off to Turner on the jet sweep. The sophomore receiver bounced off a few tackles and stayed in bounds down the right sideline for the 29-yard touchdown with 5:04 left in the contest.

“The funny thing is coach just told me to get the first down,” Turner said. “When I got the first down, all I saw was green grass. I tried to just go get a touchdown. I wasn’t going to get tackled.”

“He was over there inconsolable after he fumbled like he let the whole world down,” Fuente said. “My concern is getting him built back up so he can play.

“We always want to get him involved in what we’re doing. You go over to him and tell him, ‘We’ve got to play the next play.’ I told him I’ve thrown a lot more interceptions than he has fumbled. He smiled… and went out there and played his tail off.”

Still, the Hokies couldn’t breathe easy just yet. Furman drove down the field and knocked in a 22-yard field goal to make it a one-score game. Lane Stadium then fell silent after the Paladins recovered the ensuing onside kick.

However, replay showed that Furman illegally blocked a Tech player before the ball traveled 10 yards. Hezekiah Grimsley recovered the ensuing re-kick, and Willis was able to run out the clock and enter a victory formation.

Virginia Tech now has 13 days between its next game when it welcomes Duke to Blacksburg for a Friday night duel on September 27. 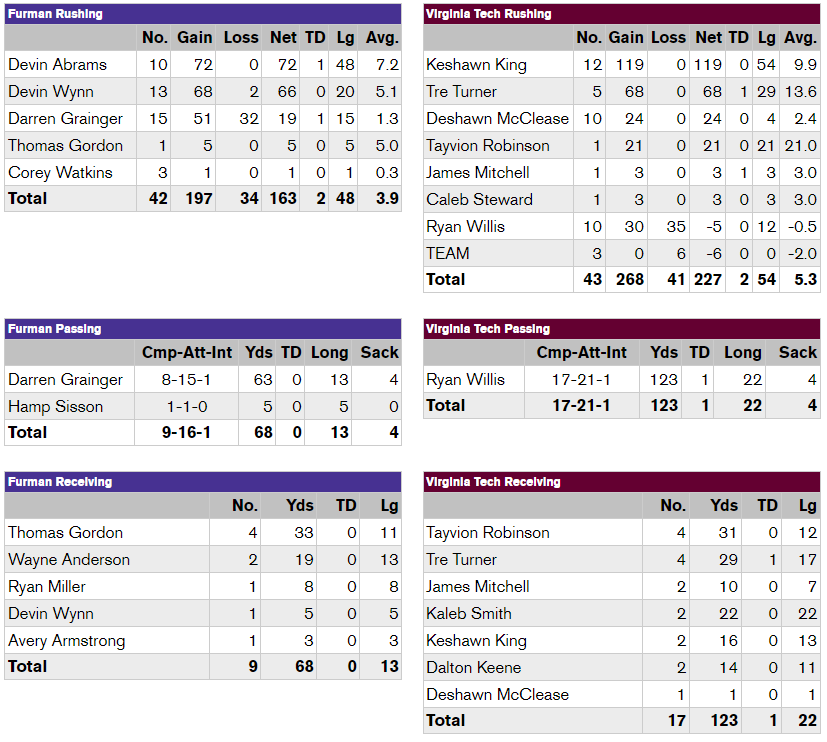