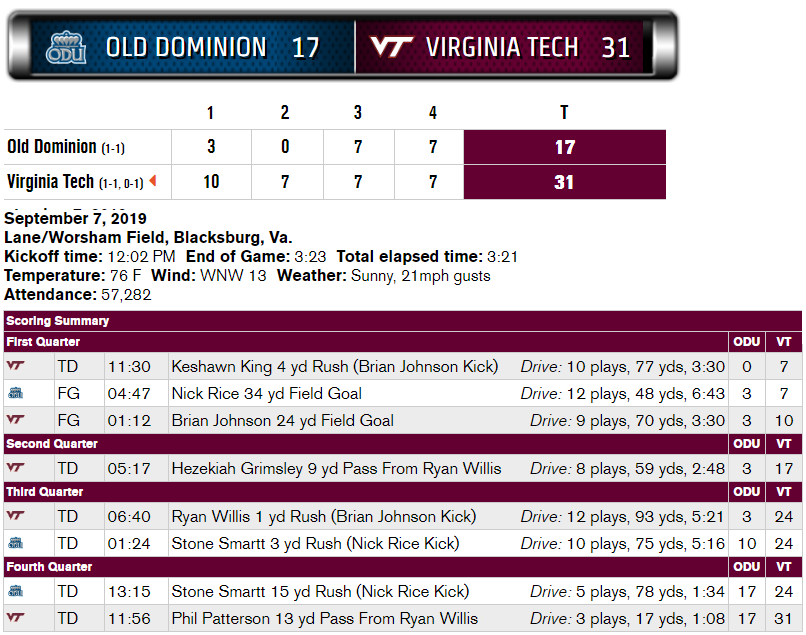 A collective groan was unleashed by the 57,282 fans inside Lane Stadium. Old Dominion gashed the Virginia Tech defense for three big runs on a 5-play, 78-yard scoring drive that was capped off by Stone Smartt’s 15-yard scamper to cut the Hokies’ lead to 24-17.

It was a drive that brought back painful memories of Virginia Tech’s helpless defense last year during the 49-35 loss to the Monarchs in Norfolk.

Is this really going to happen again?

All the momentum had swung to the side of the visitors early in the fourth quarter. That is until Terius Wheatley accelerated down the sideline for a 71-yard kickoff return down to the 17-yard line. Three plays later, Ryan Willis found Phil Patterson, who broke open just inside the corner of the end zone for a 13-yard touchdown on third-and-6.

“That was awesome by Wheatley,” said Willis, who found eight different receivers while going 16-of-28 for 272 yards and two passing touchdowns along with a rushing touchdown. He threw no interceptions. “I thought he was going to take it to the house. He set us up in really good field position and we took advantage of it.”

The grumblings quickly shifted to cheers, and the Hokies (1-1) regained control en route to a 31-17 triumph over Old Dominion (1-1).

“We really wanted to keep the focus on football and not all the other stuff,” head coach Justin Fuente said. “I think the kids did a good job of that. It was a little bit of a circus, quite honestly. We wanted our guys to stay focused on the task at hand, and they did a good job of that, finding a way to win the game.” 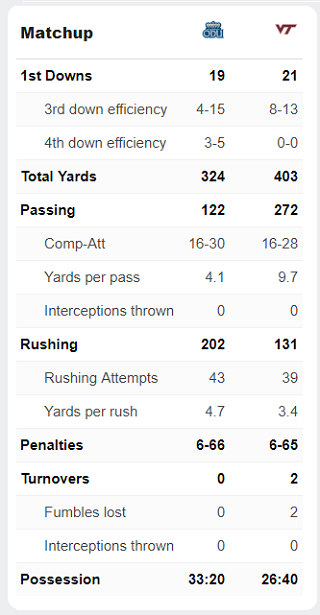 During the media availability leading up to Saturday’s game against Old Dominion, Virginia Tech players and coaches were asked frequently about last year’s embarrassing 49-35 loss in Norfolk to the Monarchs.

Add in the fact that former Hokies Eric Kumah and Chris Cunningham were on the opposing sideline, and it culminated in a lot of outside noise that the program blocked out in the lead up to the game.

“We can’t do anything about any of that other than we have to focus on the football game and get ready to play football,” Fuente said. “All the stuff outside, the talk… we can’t concern ourselves with those things.”

“We really just played within ourselves and tried to practice every day to get ready for our game,” said Jarrod Hewitt, who totaled five tackles and half a sack. “I think that loss is always going to sting this program just a little bit, but today it doesn’t really matter to me. At the end of the day, we won the game.”

Kumah finished the day with three catches for 24 yards while Cunningham received three carries for six yards as the duo was greeted with a chorus of boos anytime their names were announced over the PA. Virginia Tech defensive coordinator Bud Foster in particular shared a warm sentiment with Kumah in the postgame.

“It wasn’t about stopping Eric Kumah or anything like that,” Foster said. “Eric searched me out afterwards. I recruited Eric. Wished him nothing but the very best. He was so appreciative of me giving him an opportunity to play college football. I told him at the end this will be a relationship for a lifetime.”

Just under one year ago, Virginia Tech’s defense was gashed for 631 total yards in this same matchup. It was the most yards that a Foster-led defense has ever allowed.

The first half told a different story, as the Lunch Pail Defense allowed just three points, five first downs, and 70 total yards. However, things quickly changed as Smartt and Co. gave Virginia Tech headaches in the second half.

Old Dominion concluded the game with 324 total yards, including 202 yards on the ground for 4.7 yards per carry. Lynchburg native Lala Davis tallied 81 yards on 11 carries. Smartt kept multiple plays alive with his legs, including two rushing touchdowns on quarterback keepers.

“I thought we played pretty solid all day, then we went through a two-series stretch late in the third quarter, early fourth quarter (where) we reverted back to really poor execution and poor tackling,” Foster said. “I think their quarterback is an athletic guy who creates some problems with the ball in his hand… It goes back to we have to play for 60 minutes. We can’t play for 50 or 45.”

Virginia Tech opened the game with a methodical 10-play, 77-yard drive that was finished off with a 4-yard rushing touchdown by Keshawn King, the first of his career. King didn’t return after the first quarter, and Fuente offered a puzzling explanation considering the freshman didn’t fumble.

“Keshawn is fine,” Fuente said. “He’s got to get up with the ball in his hands to continue to get carries.”

The Hokies as a whole still had a hard time gaining any traction in the rushing attack. The team averaged just 3.4 yards per carry over 39 attempts for 131 yards. Deshawn McClease carried the ball 20 times for 64 yards.

The one stretch where Virginia Tech had its most success on the ground was the first series of the third quarter. True freshmen Bryan Hudson and Doug Nester lined up at center and right guard respectively, while redshirt freshman Luke Tenuta was inserted at right tackle. Over the drive, the Hokies ran the ball nine times for 52 yards, ending with a 1-yard plunge by Willis for the touchdown to increase the lead to 24-3 at the time.

While that was arguably Tech’s most impressive drive, the highlight reel play of the game belonged to Hezekiah Grimsley. Willis lofted a pass in the right corner of the end zone to Grimsley who reached for it with one hand, then collected it against his body as he was falling down for a 9-yard touchdown in the middle of the second quarter.

It was Grimsley’s second touchdown that he’s hauled in this year.

“I didn’t plan on making a one-handed catch,” Grimsley said. “I just stopped the ball and it fell where it fell… With this generation, we want to make ESPN with all of these highlights and everything.”

“I was so happy for him,” Fuente said. “When you talk about a guy who we’re all pulling for because of how he works and the things that he’s been through. When you see guys have success that we see every day behind the scenes… it’s really cool and those are special moments.”

After Virginia Tech secured the 31-17 lead in the fourth quarter, the turnover bug returned from the previous week where the Hokies committed five costly turnovers at Boston College. With 8:06 remaining, Willis kept the ball on the read option and fumbled after his neck got jammed between two defenders.

Willis didn’t return to game, but he’s fine by all indications.

“I was a little concerned (about potential injury), and I also didn’t like that we turned the ball over,” Fuente said.

The defense forced a three-and-out, but McClease coughed up the ball on the next possession. Through two games, Tech has a minus-six turnover margin.

“We practice ball security every single day,” said Tayvion Robinson, who recorded a team-high four catches for 62 yards on the day. “Each time it happens in the game you are getting yelled at by one of the coaches about putting the ball (on the ground).” 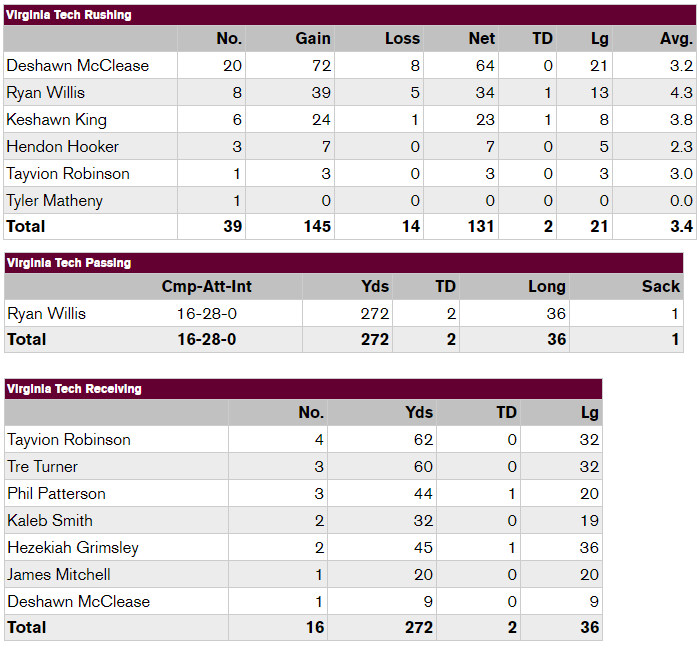 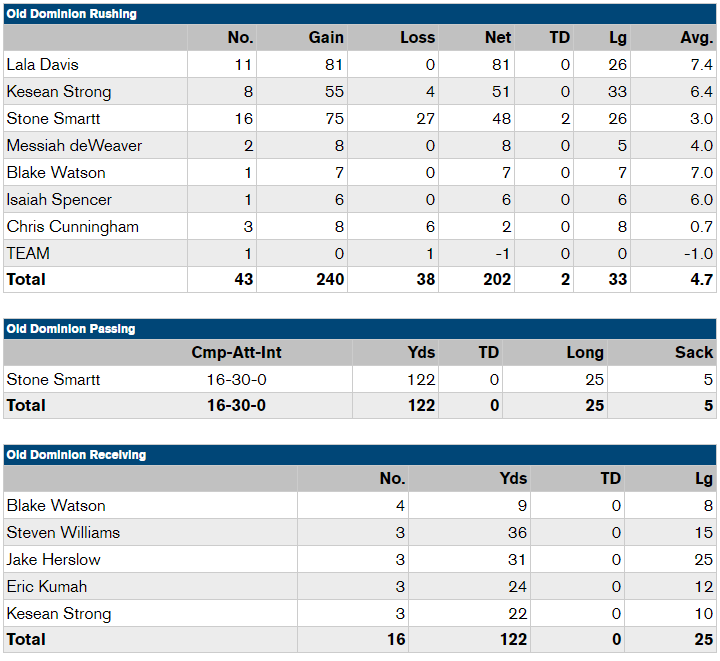