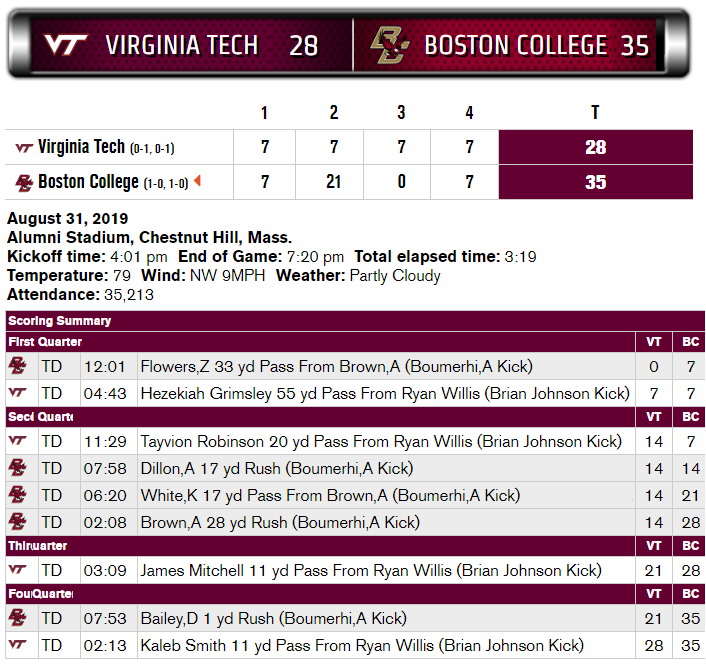 In season opening wins over West Virginia and Florida State the past two seasons, Virginia Tech played turnover-free football on the path to victory. The same could not be said on Saturday.

“It was tough for our guys to battle back and scratch and claw all the way through and come up short,” Virginia Tech head coach Justin Fuente said. “Lord knows we made plenty of mistakes out of there today.”

Trailing 7-0, the Hokies got on the board in the first quarter after Ryan Willis connected with Hezekiah Grimsley for a 55-yard touchdown bomb. Two drives later, Willis found Tayvion Robinson in a tight window for a 20-yard touchdown to take a 14-7 lead in the second quarter.

The Eagles immediately responded and tied the game on a 17-yard rush by BC tailback AJ Dillon after the Hokies initially had him stuffed in the backfield.

Following that possession is when the turnovers began to pile up for Virginia Tech, leading to disastrous results.

Faced with a third-and-7, Willis attempted to sidestep an oncoming rusher and was instead stripped by Tate Haynes as Boston College recovered at Virginia Tech’s 17-yard line. Three plays later, Anthony Brown found Kobay White on a fade in the end zone for the touchdown.

Later in the second quarter, the punt return woes from 2018 returned as Grimsley muffed a punt and Boston College recovered inside the Hokies’ 30. Brown again found paydirt, this time on the ground with a 28-yard keeper to extend the Eagles’ advantage to 28-14 with 2:08 remaining in the half.

Brown was outstanding in the first half, passing for 258 yards and two touchdowns plus the one on the ground. He finished the game 15-for-26 with 275 yards. 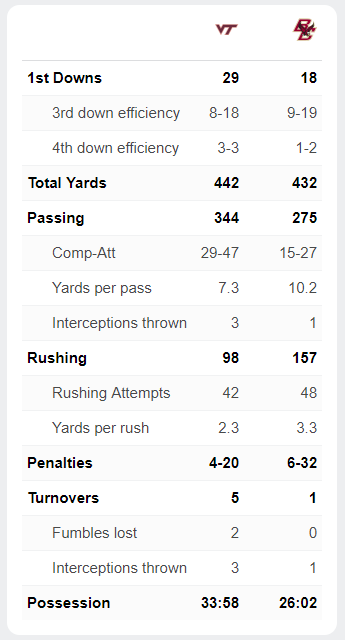 The Hokies drove down the field, attempting to make it a one-score game going into the locker room, but Willis forced it to James Mitchell and was intercepted in the endzone by Joseph Sparacio.

“I need to take care of the ball better,” Willis said. “There’s a couple of reads that I can make better. I had some tough looks here and there. The first one, they showed us a little 3. I tried to hit a seam, and the outside linebacker made a good play. He rolled, and I thought he was going to fall off, and he made a good play.”

Bud Foster and Co. made several adjustments in the second half and didn’t allow a net yard in the third quarter.

Still, early in the third quarter, Willis threw a pass into double coverage toward Phil Patterson that was intercepted in the endzone by Bryce Sebastian, when Grimsley was streaking wide open down the middle on the play.

After Willis found Mitchell for an 11-yard touchdown pass to make it 28-21 with 3:09 to go in the third, Boston College went three-and-out for the third straight time in the quarter.

However, the fifth and final turnover of the game eliminated a valuable opportunity to tie the game early in the fourth. Willis tried to slip a screen pass to Deshawn McClease, but defensive lineman Tanner Karafa drifted back into the passing lane for the pick.

“We’ve got to be better than that,” Fuente said. “We need to have our eyes in the right spot playing quarterback. Obviously forced some balls in there at some times that weren’t good. Ryan knows that. I still believe Ryan can make plays and take care of the football.”

Late in the fourth quarter, the power running game wore down Virginia Tech’s defense. The Eagles ran the ball nine straight times for 56 yards, capped off by a David Bailey 1-yard plunge, growing the lead to 35-21 with under eight minutes to play.

Willis led a late touchdown drive, tossing an 11-yard strike to Kaleb Smith, but after a failed onside kick attempt, and Dillon gashing the defense on third-and-9 with under two minutes left, the game was wrapped up. The Overland Park, Kansas native finished 29-for-47 with four touchdowns and three interceptions for the Hokies.

Limiting costly mistakes is a simple recipe for winning football. Virginia Tech failed to do so as the five turnovers were the difference in the loss. Two of those turnovers led to 14 points for Boston College, and two more prevented 14 points from being put up on the board by the Hokies

“You can maybe survive one or two of those, but not however many we ended up having,” Fuente said. “That’s a part of playing good people. They’re going to make you pay for those things.”

Virginia Tech will look to regroup next Saturday by returning home to face Old Dominion at noon. It also offers a chance for the Hokies to avenge last year’s shocking loss to the Monarchs, while also welcoming some familiar faces in Eric Kumah and Chris Cunningham, both of whom now play for ODU, back to Lane Stadium.

Much of the talk prior to the game revolved around how Virginia Tech’s defense would fare against Boston College and the vaunted ground attack. The Hokies kept Dillon in check for the most part, as the junior rushed for 81 yards on 23 carries (3.5 ypc) and just one touchdown.

Over the course of the game, Foster’s unit allowed just 3.3 yards per carry, but that final 11-yard rush on third-and-9 will eat away at the defensive coordinator over the next few days.

“They ran what we call ‘power solid.’ All we have to do is gap fit, and I promise you there is a guy that ran out of his gap,” Foster said. “That’s where we’ve got to be consistent. You can do it nine times out of 10 at this level of football. That one play at this level can beat you.”

Early on, it looked like much of the same from last year on defense, as there was a non-existent pass rush and cornerbacks were continually getting beat on deep balls, particularly to speedy freshman Zay Flowers.

In the second half, the Lunch Pail Defense bared down and allowed just seven points and 76 yards. Jermaine Waller even added the first interception of his career on an Eagles’ trick play. The improvement from the defense is an area to monitor in the coming weeks.

The rushing game for Virginia Tech didn’t have much to offer. The Hokies rushed 42 times for 98 yards (2.3 avg.) as true freshman Keshawn King led the way with 10 carries for 33 yards.

One of the bigger developments of the game was Damon Hazelton’s absence. Hazelton dressed, but Fuente said he didn’t play because of a hamstring injury.

In his absence, redshirt freshman and former walk-on Kaleb Smith and true freshman Tayvion Robinson supplied threats on the outside. Smith ended the game with four catches for 62 yards and a nifty touchdown catch, while Robinson collected six receptions for 72 yards and a touchdown.

[Kaleb Smith] has been an incredible worker,” Fuente said. “He’s still learning the craft, he’s still working on some technique, but it was good to see him out there have some success today because he has been out there every day busting his tail to try to get better.”

There were a number of injuries throughout the game for Virginia Tech. Tyree Rodgers, TyJuan Garbutt, Jovonn Quillen, Jalen Holston, and Zachariah Hoyt all sustained injuries and did not return to the game. Divine Deablo returned after coming up gimpy early on and Tre Turner appeared to be battling cramps in the second half. 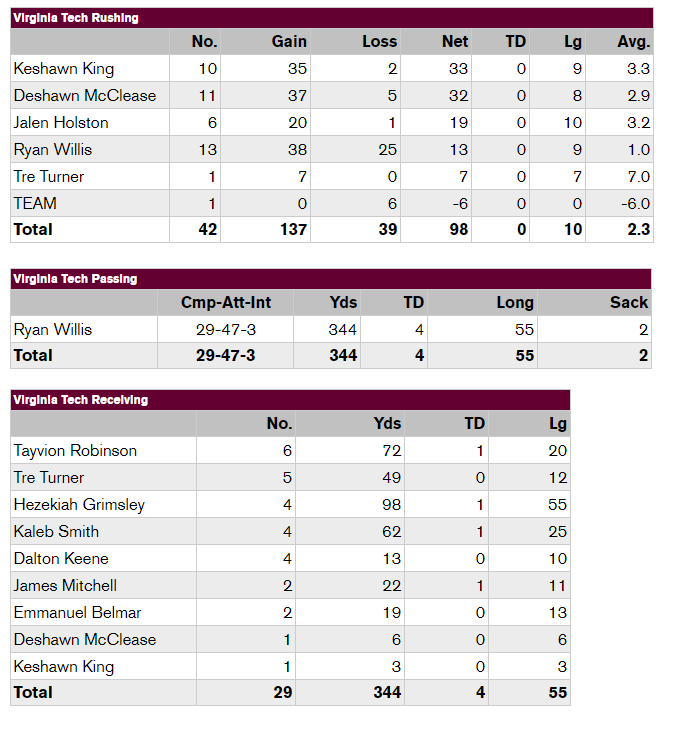 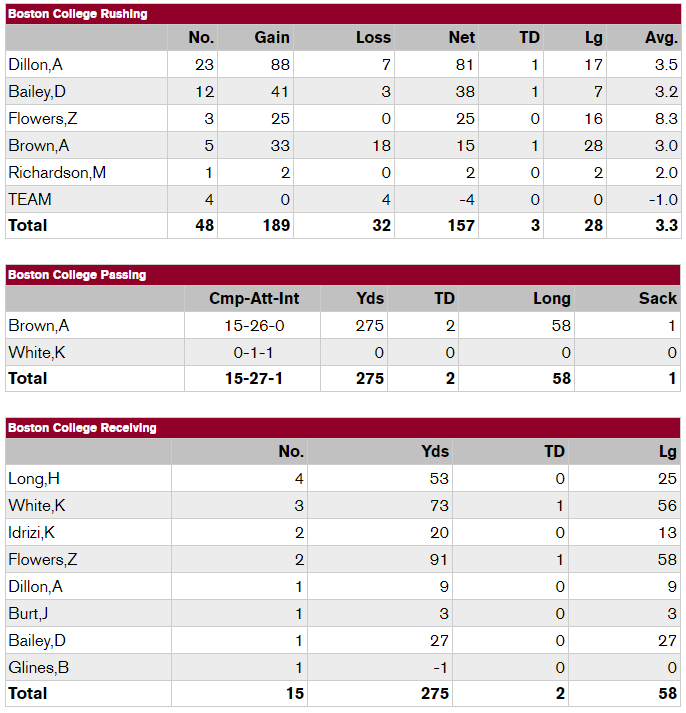