On Monday morning before head coach Justin Fuente arrived for his weekly press conference, the depth chart for the start (below, at the bottom of the article) of the season was released. As expected, and much to Fuente’s chagrin, it led to a number of questions about specific positions. At times, he wasn’t so keen to some of the questioning.

“Why do you guys get so hung up on who starts? That drives me nuts,” Fuente said. “I’m serious.”

The answer came in response to a question about the many “OR’s” on the depth chart.

“We won’t put ‘or’ on there again as long as I’m here, I can promise you that,” Fuente said with a half-hearted chuckle. “I’m going to put a one-deep out or a zero-deep out. I’m just kidding.”

While Fuente might not be interested in analyzing the starting lineups that will trot out onto the field in just five days against Boston College, the release of the depth chart is now an annual tradition where fans finally get a glimpse into what the Hokies could look like that year.

This year, there weren’t that many surprises, but Vance Vice could still have a few tricks up his sleeve. From left to right, Virginia Tech’s offensive line consists of Christian Darrisaw, Lecitus Smith, Zachariah Hoyt, T.J. Jackson, and Silas Dzansi as the listed starters. This could of course change like it did last year when Darrisaw started at left tackle despite Dzansi being listed there on the depth chart.

One of those changes could be Brock Hoffman if he’s cleared before the season starts.

“In short, [Brock will] still get reps until we know what the deal is,” Fuente said. “If he’s eligible to play, I would imagine barring any unforeseen circumstances he’ll play.”

Another one of those big surprises could potentially be Luke Tenuta, the big 6-foot-7, 315-pound tackle who coaches have been highly complimentary of over the course of camp. As of now, T.J. Jackson is the only player projected to start on the offensive line who doesn’t have a start to his name. The 6-foot-6, 359-pound redshirt junior guard is also one of the most experienced, class-wise, of the group.

“This is his time,” Fuente said. “He’s had that growth and maturation time. When we recruited him, to say he was raw would be an understatement. He was a big athletic kid that has continued to stay after it and earned himself an opportunity to get some playing time.”

Other Positions of Note

At the nickel/whip position, Chamarri Conner was given the nod on the depth chart over last year’s starter Khalil Ladler. Ladler was third on the team last year with 66 tackles, but he missed the entire spring while dealing with injuries.

Conner played sparingly in his freshman season, recording 13 tackles. Coaches have spoken glowingly of the 6-foot, 211-pound sophomore over the course of camp, and it appears he’ll now get his shot.

“Khalil is incredibly valuable, first of all,” Fuente said. “He can play all three safety positions. He’s a starter on special teams. He went through a huge sacrifice last year playing beat up. Chamarri has been working at that spot since the spring. Continued to improve every single day. We have total confidence in being able to put Khalil in there as well.”

Jermaine Waller and Jovonn Quillen are both slotted in as the second cornerback, and Fuente confirmed that they each will get playing time.

While not a surprise, DaShawn Crawford is listed as a starter at defensive tackle alongside Jarrod Hewitt. Crawford came in as a JUCO transfer from Jones County Junior College where he racked up 38 tackles, 15 tackles for loss, and 2.5 sacks last year. Listed at 6-foot, 290-pounds, Crawford immediately provides experience and a big body at a position of need.

“That’s the one spot where we knew we were going to have to play new or inexperienced people coming into the season,” Fuente said. “Getting DaShawn here and getting him working out in our offseason, getting him acclimated to Division I football, has been big. Having an extra spring with him has been very beneficial. He has benefited from that dramatically.”

On To Boston College

The entire press conference didn’t just consist of talk about the released depth chart. There’s still a game to be played this Saturday against Boston College.

Much of the discussion about the Eagles revolves around star-studded running back A.J. Dillon, and Fuente was quick to address him in the opening statement.

“The first thing you see is obviously their tailback is a fine player,” Fuente said. “Probably as good as there is in the country at that position. He’s got everything. He’s got speed and size and athleticism. And plenty of components around him with the quarterback and tight ends and skill players. Certainly going to be a challenge for us on the defensive side of the ball.”

Boston College always brings a hard-nosed, physical team to the gridiron. This year, the Hokies are expecting nothing different. It’s also the second year in a row that Virginia Tech has opened the season with an ACC opponent on the road after defeating Florida State 24-3 in Tallahassee in 2018.

While sloppy play is often an issue in the opening week of the season (as was seen in the Florida-Miami game on Saturday), the Hokies have actually played turnover-free football against West Virginia in 2017 and Florida State in 2018 to open the year.

“When you are out there in an emotionally charged, physical game, sometimes those things don’t go well,” Fuente said. “Getting our kids to the point where they can execute what we are asking them to do in those environments is one of the challenges of coaching. We try and educate them throughout the year and throughout fall camp.”

Minutes after Monday’s press conference with Fuente concluded, a press release came out announcing a new tradition where a current player “who epitomizes the Virginia Tech work ethic, a team-first attitude and a willingness to do whatever it takes to help himself and his teammates improve on a daily basis,” would wear the No. 1 jersey for the entire year.

Reggie Floyd was selected for the honor by a vote from his teammates as the only senior starting on defense. As a junior, Floyd was second on the team with 88 tackles and two interceptions.

The No. 25 jersey will still be given out every week to a deserving special teams’ player from practice to honor Frank Beamer.

Tech’s initial depth chart is below.  Click for a larger image. 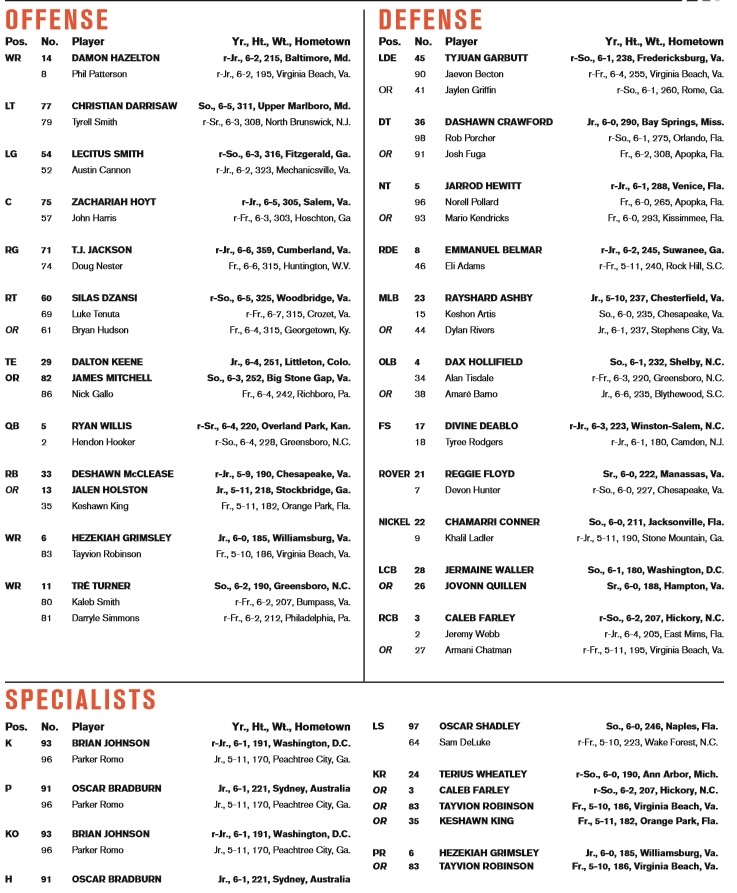