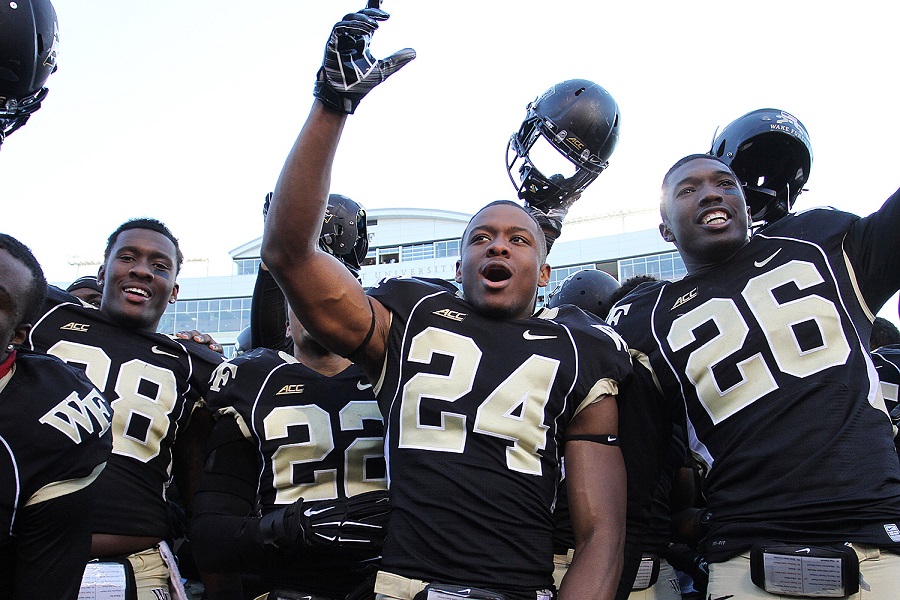 Virginia Tech will face Wake Forest this year for the first time since 2014, the infamous game in Winston-Salem where the Demon Deacons won 6-3 in overtime. In 2018, Dave Clawson continued leading Wake Forest in the right direction with its third straight winning season, no small feat for that program. Clawson has gone 28-35 over five years in Winston-Salem, but he’s a combined 22-17 over the last three years.

The Demon Deacons finished 7-6 in 2018, with a 37-34 victory over Memphis in the Birmingham Bowl marking the team’s third consecutive bowl win. Last year, Wake Forest was a typical 6-6 regular season team, beating those teams you would expect them to beat and falling against stronger opponents. Clawson and Co. finished the year strong with a 59-7 triumph against Duke and the aforementioned bowl victory to ride into the offseason with some momentum.

Offensive coordinator Warren Ruggiero will enter his sixth season with the Demon Deacons. Ruggiero was previously at Bowling Green with Clawson for five years.

The strength of Wake Forest’s offense will come from the quarterback position that is currently locked in a battle between sophomore Sam Hartman and redshirt junior Jamie Newman. Hartman won the job last year as a true freshman, starting the first nine games before missing the rest of the year with a leg injury. Hartman is the bigger passing threat, throwing for 1,984 yard and 16 touchdowns last year. Newman finished the year on a positive note, with three wins in four games following Hartman’s injury. Using his physical 6-foot-4, 245-pound frame, Newman adds a power running element that accounted for four rushing touchdowns along with 1,083 passing yards and nine touchdowns through the air in 2018.

On the outside, the loss of explosive receiver Greg Dortch hurts. The all-purpose playmaker led the receiving corps with 1,078 yards and eight touchdowns while adding two punt return touchdowns. Second leading receiver Sage Surratt returns and will have to pick up the slack in his place.

Wake Forest returns leading rusher Cade Carney from last year, who will also be a focal point of this year’s offense. Carney was a 1,005-yard rusher with eight touchdowns in 2018.  With a quarterback and feature running back returning, Wake Forest has the potential for a potent offense like the one that put up 449.8 yards per game in 2018.

As noted in the Boston College capsule, it’s strange to see a vast disparity between the advanced stats and traditional stats like we see here with the Demon Deacons. Despite allowing an egregious 458.6 yards per game on defense, a number that’s better than only 14 teams in the country, Wake Forest was an average defense efficiency-wise.

Defensive coordinator Lyle Hemphill enters his first official season in the position. He was promoted in the middle of the season last year once Jay Sawvel was fired after allowing 56 points in a loss to Notre Dame.

Much like the Hokies, Wake Forest had a hard time garnering sacks from the defensive line in 2018. Willie Yarbary led the unit with 5.5 sacks, but he graduated. Carlos “Boogie” Basham Jr. returns after collecting 4.5 sacks and 11 tackles for loss as a quick-twitch defensive end.

At linebacker, Justin Strnad is back as the leader of the defense. The redshirt senior collected a team-high 105 tackles last year. Meanwhile, Essang Bassey provides key experience in the secondary, having started 26 consecutive games. Over his career, Bassey has 34 pass breakups and four interceptions.

Last year the Demon Deacons found themselves locked in a lot of high-scoring affairs. While the defense did see improvement following Sawvel’s firing, Wake Forest still gave up 33.3 points per game. I wouldn’t expect another 0-0 game entering overtime when the Demon Deacons come to Blacksburg in November.

Why This Game is Important

Wake Forest: While Clawson has brought vast improvement to Wake Forest, the one thing he hasn’t done is led the team to a winning record in conference play. If the Demon Deacons are going to take the next step and get to that point in 2019, a win against Virginia Tech seems necessary.

Virginia Tech: Frank Beamer celebrating Wake Forest’s missed field goal to enter overtime locked in a 0-0 tie in 2014 is an image that still burns in the minds of Virginia Tech fans. The meeting in November provides the opportunity for the Hokies to 1) score a touchdown that was missing in the last matchup and 2) earn a much-needed win if they’re going to contend in the Coastal while also eliminating some of those memories from 2014.