The historic regular season for Virginia Tech softball wrapped up with a 45-8 record and an ACC regular season championship. After back-to-back losing seasons in the final two years of Scot Thomas’s tenure as head coach, Pete D’Amour has taken the team to new heights in his first year. This is the first time the Hokies have reached 45 wins in a season since 2008, when Tech legend Angela Tincher was still in the circle in Blacksburg and the Hokies went 50-19 and advanced to the College World Series.

“It’s obviously been a successful year, laying the groundwork of what we want the program to be in future years,” D’Amour said. “45 wins is a big deal. Anytime you’re over 40, that’s kind of the benchmark for softball. To get there in our first year is a big deal.”

There weren’t many struggles along the way for D’Amour’s squad this year as it won every ACC series on the schedule, with the exception of one. Two weekends ago, the Hokies lost two out of three at home to North Carolina. Tech only lost two other games throughout the rest of conference play and ended up 20-4 in the ACC.

“[UNC’s] pitching kind of threw us off balance, their kid Hannah George came in and threw really well,” D’Amour said. “They put the ball in play and we made a couple of miscues. They just played a little bit better than we did.”

If the Hokies want to advance deep into postseason play, they will have to be able to beat top-tier teams like the Tar Heels. In next week’s ACC Tournament, it is likely that Tech will have to play UNC or #5 Florida State. The Hokies are just 2-2 against ranked opponents this season, so these matchups would be a test for the young team.

“We can’t beat ourselves [against top teams]. It’s all hands on deck right now because it’s a single elimination tournament,” D’Amour said. “You can’t make the moment bigger than it is. We don’t have to add any pressure, the players already know what the moment is like and what is at stake.”

Since their second loss to North Carolina, Tech has won their last five games, including a sweep of Boston College on the road. The Hokies have been known to get hot this season, with an 11-game winning streak earlier in the season, which they followed up with a stretch where they won 11 of 12. If they can take momentum from this late season success into the postseason, they could be a dangerous team.

“I want to keep us grounded and keep the mentality we’ve had all year as the team that is under-the-radar,” D’Amour said. “We kind of play with a chip on our shoulder and I want to continue that.”

Tech has already accomplished so much this season, but an early exit from the ACC Tournament or the NCAA Tournament would be a disappointment. Avoiding complacency after this historic season will be crucial for D’Amour and his team in order to continue playing late into May.

“I don’t think there will be complacency. We’ve had a good year, but the postseason is what you come to school for,” D’Amour said. “To play in regionals, to play in the ACC Tournament, if you’re a competitor, those are the games you go to school for.”

Exceeding expectations has been the theme of the season for the Hokies. Despite, their fantastic record, they are still sitting at #24 in the rankings. Tech will have to continue to fight to make a postseason run, but with what they have done this year, anything is possible for this team.

“If we keep playing like we’ve been playing, we can go a long way,” D’Amour said. “The thing about the postseason is that it just takes one bad inning or one bad play and your season is over. We just have to keep doing what we’re doing and stay in the moment and we’ll see what happens.”

Note: All ACC Championship games will be televised (see the bracket below). Check your local listings, and refer to the 2019 ACC Softball Championship Home Page. 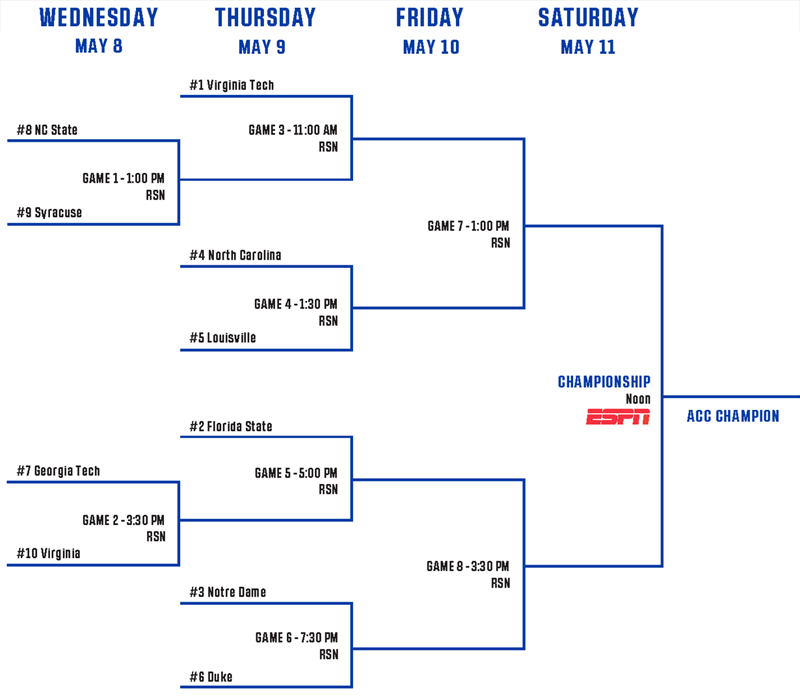