Rising redshirt senior Kerry Blackshear has decided to enter his name in the 2019 NBA Draft, as well as the transfer portal.  He could also remain at Virginia Tech for his final season of eligibility. 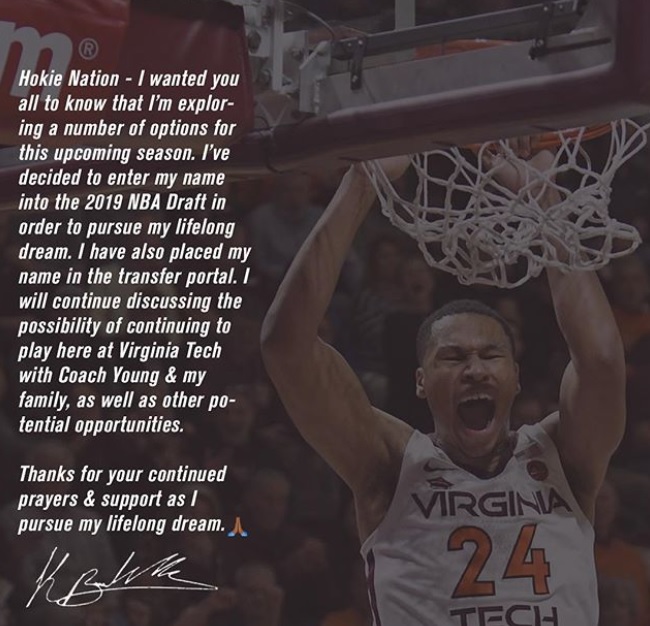 Blackshear averaged 14.9 points and 7.5 rebounds per game in 2018-19, and he was the team’s top scorer and rebounder during the time Justin Robinson missed with a foot injury.  He has already graduated, and would be eligible to play immediately at another school.  He is currently not projected to be drafted, and he could decide to withdraw from the draft if he chooses.

Blackshear indicated in his message that he is still considering a return to Virginia Tech.  New head coach Mike Young has met with his parents in Florida, and Blackshear’s father told Mark Berman of The Roanoke Times that Virginia Tech is still “at the top of his list.”  Click here to read the whole article.

Not including players in the transfer portal, but including the one remaining recruit in the 2019 class, Virginia Tech’s current 2019 scholarship roster looks like this…

It’s still possible that Blackshear, junior guard Wabissa Bede and redshirt freshman guard/forward Landers Nolley could still return to the team.  It’s also possible that Emanuel Miller could request to be released from his letter-of-intent.  He is a Canadian player, and he was recruited to Virginia Tech by former assistant coach and fellow Canadian Jamie McNeilly, who has since joined Buzz Williams at Texas A&M.

Besides attempting to hold onto players in the transfer portal and trying to convince former 2019 signee Anthony Harris to renew his commitment, Mike Young is in the process of identifying and recruiting new 2019 prospects, and is likely evaluating numerous graduate transfers as well.  Virginia Tech’s final 2019-20 roster is not close to being set.