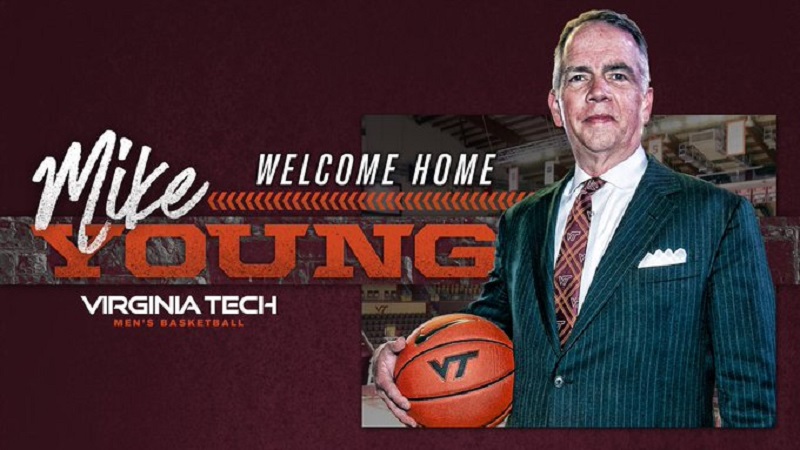 Virginia Tech has hired Wofford’s Mike Young as the new head coach of the men’s basketball program, according to a release from the school on Sunday night.

“We are fortunate to have been able to recruit Mike Young to Virginia Tech, not only because of his proven leadership and coaching ability, but because Coach Young is home in Southwest Virginia and leads his life in the true Hokie tradition of integrity and commitment to service,” Virginia Tech President Tim Sands said. “I look forward to the excitement and success we will enjoy as Coach Young and his student-athletes hit the court and compete to win. Laura and I are excited to welcome Coach Young and his family to Virginia Tech and Blacksburg. We look forward to sharing our campus and the many Hokie traditions that make this place home for all of us.”

“Coach Young has earned tremendous respect and admiration across the nation for the integrity and winning tradition that were trademarks of his program at Wofford,” Whit Babcock said. “His track record of winning consistently on the basketball court combined with his ability to develop young men into leaders and help them fulfill their potential academically and athletically appealed to us at Virginia Tech. His propensity as a recruiter, a teacher and an innovative coach are all attributes that will serve him well at Tech.

Young has been the head coach at Wofford since the 2002-03 season, and he has led the program to five NCAA Tournaments.  Before taking the head coach position, he was an assistant coach at Wofford from 1989 through 2002.  He also spent one year as an assistant at Radford in 1988-89.  He played at Emory & Henry, and also spent two seasons on that coaching staff after his graduation from college.

“On behalf of my entire family, we are humbled and honored to serve as the stewards of the men’s basketball program at Virginia Tech, Young said. “We are extremely grateful to President Sands and Whit for extending this opportunity to us that we will embrace with great fervor and enthusiasm. I’ve long admired Virginia Tech from afar for its principles, as well as for the ability of its athletic programs to consistently win with integrity. I can’t wait to meet our student-athletes, support staff and fans as we prepare to get to work in Blacksburg.”

Virginia Tech will hold a press conference introducing Young on Monday, April 8 at 11am.  Fans are encouraged to attend.  Click here for the full press release from Virginia Tech, which includes comments from head coaches and basketball experts from around the country on the hire.