Two Virginia Tech players earned All-ACC honors in a voting consisting of ACC head coaches and some members of the media.

Here’s how the voting looked… 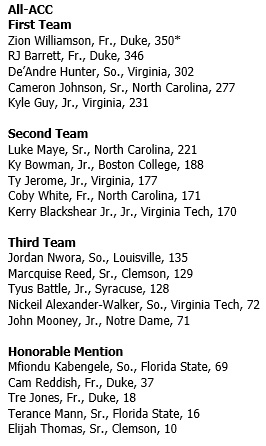 Head coach Buzz Williams finished second in the voting for ACC Coach of the Year.  UVA’s Tony Bennett won the award with a total of 30 votes.  Most of the media was split between four other candidates, which prevented anyone being a serious challenger to Bennett at the top.  Here’s how the voting broke down…

All ACC coaches plus 55 media members took part in the voting.  A separate AP All-ACC vote will be released on Tuesday.