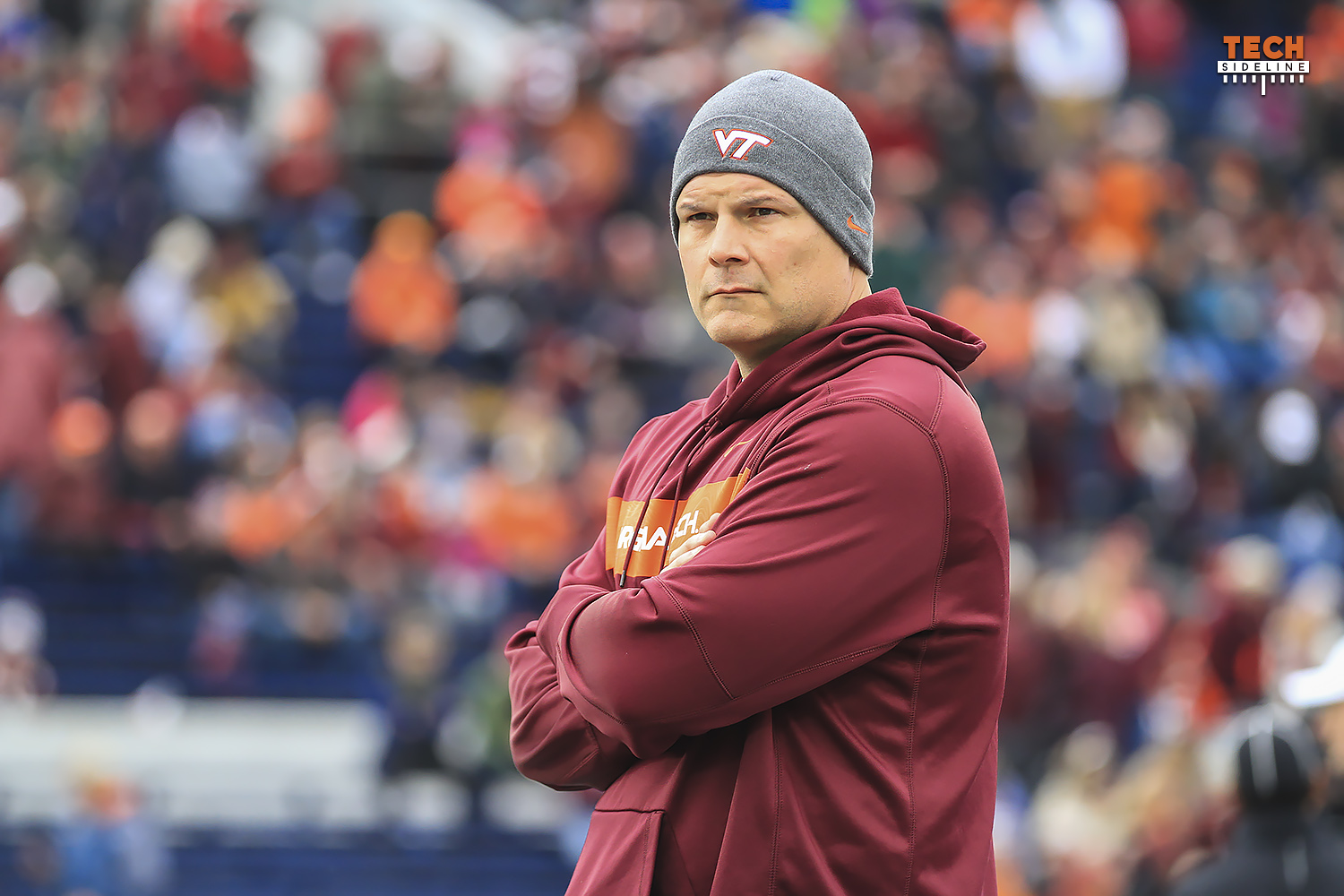 Justin Fuente announced that Virginia Tech will be moving the start of spring practice back a couple of weeks. (Photo by Ivan Morozov)The weather is beginning to warm up, which means the spring season is upon us. However, spring football in Blacksburg will have to wait a few weeks.

Virginia Tech spring football practice was slated to begin on March 3, but head coach Justin Fuente decided to move it back to March 20. The spring game will remain on April 13 at 4 PM.

“We set the spring game schedule about a year in advance so we can work it out with the university,” Fuente said at Thursday’s press conference. “I make that schedule then shortly thereafter. As we’ve gotten closer and closer towards starting, I look at where we’re at from an injury standpoint, from a health standpoint, from a developmental standpoint, and a little bit from a staff standpoint. Graduate assistants who have just literally walked in the door. We decided to make this switch.”

The Hokies will be down a number of players during the spring, as can be seen in the list above. Several of the players battled through injuries throughout the season that required off-season surgery. Fuente listed Dalton Keene, Christian Darrisaw, and Tyree Rodgers among that distinction.

While those players are out for the spring, there are a number of other players who are limited participants who will reap the benefits of spring practice being pushed back. Chief among those players is wide receiver Damon Hazelton who has been dealing with a hamstring issue.

“I believe we’ll be able to get maybe three or four guys that are right now doing half of our stuff by then,” Fuente said. “I think there will also be some guys on the other end of it who get a little more work at the end of spring. Maybe pick up a couple guys at the beginning, and pick up a couple guys at the end of spring. It gives us a little more time before we start with coach Hilgart who’s done such a good job for many years.”

Recently promoted safeties coach Justin Hamilton will also be able to take advantage of the next few extra weeks to organize operations in his new role before officially starting the spring. While it’s the second transition that Virginia Tech has had to make at safeties helm in the past two years, it’s important to remember that Tyrone Nix was hired in June 2018 and wasn’t around the team during the spring like Hamilton will be.

“Justin, I think is a future star in this business,” defensive coordinator Bud Foster said. “He’s very personable, knowledgeable. The kids have tremendous respect for him… He played our scheme, he knows our scheme. I think he’s an outstanding teacher. He’ll be an outstanding motivator.”

The transfer portal ordeal appears to be firmly in the past now for the Hokies. It’s been an adjustment period for college football coaches across the country. Fuente refused to comment on specifics, but he did offer some insight into how he handles it when a player chooses to submit his name into the portal.

“I would say this, each situation is different without going into all of these kids’ business,” Fuente said. “I hope you understand that there’s a large part of me that just wants to protect these kids. I know they have a facemask on and they are big and strong and athletic, but they are just kids. They’re our kids.

Quarterback Hendon Hooker was a unique scenario where he entered his name into the portal and later returned to the program. Fuente commended Hooker’s communication throughout the entire process.

“I’ve met with Hendon’s mom and dad and Hendon,” Fuente said. “Those conversations I’ll keep between the Hooker family and myself. We’re excited that Hendon’s with us. I think we’re all going through a learning experience. Talking about those experiences is important. I’m happy to have him back and competing for the job.”

It may appear awkward for players like Hooker and running back Deshawn McClease who return to the team after having discussions of transferring elsewhere, but that’s the nature of the beast that is social media, where everything is now advertised. While they were gone, though, they’re still responsible for all the duties that they missed.

“We’re going to make it up,” Fuente said with a chuckle. “You certainly don’t want this two week vacation deal. We don’t have that. I can tell you that much. That’s not an issue.”

Following the announced transfers of Eric Kumah, Chris Cunningham, and Josh Jackson in January there was some panic about the state of the locker room. Over a month later, some of the current players assured that things are better than ever in the locker room.

“I feel great about the group we have coming back,” tight end/H-back Dalton Keene said. “I think a lot of this stuff brought us all closer to be honest with you.”

“It didn’t break us apart,” rover Reggie Floyd said. “I would say it brought us together even more. The vibe in the locker room is crazy right now. Everybody is pumped up to get back on the field. The main thing is to keep that vibe like it is right now and maintain it the whole season.”

Whenever discussing the leadership of a football team, the seniors are automatically brought to the forefront. Last year, Virginia Tech only had six seniors to lean on (Ricky Walker, Steven Peoples, Kyle Chung, Yosuah Nijman, Braxton Pfaff, and Vinny Mihota). It will be more of the same in 2019 where the Hokies only return seven seniors.

Instead, Virginia Tech will be counting on some of the younger guys who have lots of playing experience to carry the load.

“I really like the leadership qualities that a lot of those guys who got a taste of playing last year have,” Fuente said. “We have to continue to cultivate that leadership. We can’t wait. We can’t sit around and wait on someone else to do it. We’re kind of empowering the guys to not worry about their age.”

On the defensive side of the ball, Foster pointed to Rayshard Ashby and Dax Hollifield as the two guys in his room who he’s expecting to take an even larger role vocally this year despite being a junior and sophomore respectively. In reality, a lot of leadership is tied back to performance on the field.

“Part of leadership comes with confidence,” Foster said. “When you’ve played a little bit, when you know what you’re doing. Your mind is not tying up your feet. When you have that, you’re just playing and you’re performing. Then, it’s easy to be a leader.

“The big thing they have to realize when they’re encouraging or challenging their teammates and we have to do as coaches is there’s three fingers coming back at you. You have to set the standard and the example for what you’re asking for. I think that’s what we’re looking for in the spring.”

It’s all part of a culture shift that is happening inside the walls of the Merryman Center. Foster noted that the team isn’t talking about championships, but they’re talking about getting better. Keene explained how the mind set has shifted, for example, from ‘we HAVE to work out’ to ‘we GET to work out.’

“Our culture here has been awesome lately,” Keene said. “No one was really satisfied with last season, so we’re turning that around right now. Everyone has been going to work every single day. I think we’re taking huge steps forward.”

As one of the few senior leaders, Floyd is anxious to take the younger players under his wing and establish what Virginia Tech football should look like.

“I just want to show them that Virginia Tech is going to be back to how it was before,” Floyd said. “It’s not going to be an average season like last year.”