No. 19/20 Virginia Tech defeated No. 3 Duke 77-72 in Cassell Coliseum on Tuesday night to improve to 22-6 overall and 11-5 in the ACC.  This marks the first time the Hokies have won 11 regular season ACC games, and it’s the third year in a row they’ve defeated a top five Duke team at home.  The Blue Devils dropped to 23-4 overall and 12-3 in league play.

Once again the Hokies were led by redshirt junior center Kerry Blackshear, who had 23 points and 10 rebounds.  He was 7-of-11 from the field and 9-of-11 from the free throw line.  Blackshear is averaging 20.5 points and 9.4 rebounds in the month of February, and he has three consecutive double-doubles.

“Blackshear played great,” Duke coach Mike Krzyzewski said after the game. “And just to mention about Buzz, he’s done an amazing job with his team. Losing Justin [Robinson] and playing this month without him, I don’t think there has been anyone who has done a better job with his team than he has, terrific job by him.”

Blackshear has been getting a ton of credit from the ACC media for his performances this month, and he’s sure to get plenty of votes for All-ACC First Team at the conclusion of the regular season.  However, he stayed modest when addressing the media after the game.

“My teammates have been really confident in me,” Blackshear said while sitting on a couch wearing his bloodstained jersey and shorts. “They like giving me the opportunity to play.  I think I’ve just got really great teammates, they really look for me, they are always telling me ‘stay confident, stay poised.’ We all know we have to step up while Rob is down right now, and everybody is doing it in a different way, and I appreciate those guys for that.”

This time Blackshear got some serious offensive help from a number of his teammates.  Ahmed Hill had 17 points and was 5-of-10 from the field, while Nickeil Alexander-Walker flashed a very good floor game.  Alexander-Walker finished with 13 points, six assists, five rebounds and four steals.  He had just one turnover against a Duke defense that likes to pressure the ball.  Ty Outlaw chipped in with 11 points, while Wabissa Bede had eight.

As a team, the Hokies had just six turnovers while forcing 12 Duke miscues.  They outscored the Blue Devils 13-6 in points off turnovers, 9-5 in fastbreak points, and 26-24 in the paint.  Duke did shoot 50% from the field, but proved once again to be not quite good enough from three-point range, going just 7-of-21 (33.3%) from the outside.

Virginia Tech didn’t control the game, but they led for the majority of the 40 minutes.  Duke could never muster a lead of more than one point, while the Hokies led by as many as seven.  Tech held a 37-34 lead at halftime, but at that point future top five pick RJ Barrett had just four points and was only 1-of-7 from the field.  Things were likely going to go better for Barrett in the second half, and they did.  He finished with 21 points on 8-of-15 shooting, and he made numerous critical shots when it looked like the Hokies were just about to make a run and pull away.

Duke rallied twice in the final eight minutes to tie the game, but each time the Hokies responded with a big shot out of a timeout.  First it was Wabissa Bede with a three-pointer from the corner at the 7:14 mark to put the Hokies up 62-59.  The second was the most important one, and it ended a late Duke run.

Trailing 70-63 with 3:41 left, Duke went on a 7-0 run over the next two minutes to tie the game at 70 with 1:51 remaining.  Buzz Williams called a timeout to set up a play, and Bede found Ty Outlaw for an open three-pointer to put Tech up 73-70 with 1:28 remaining.  The Hokies got a stop on their next possession, then missed a three-pointer with 30 seconds left.  However, Kerry Blackshear grabbed the offensive rebound,  and the Hokies got the ball to Nickeil Alexander-Walker, who was fouled and made two free throws to extend the lead to 75-70.

After a layup by Duke freshman Tre Jones, Kerry Blackshear closed out the game with a pair of free throws with 11 seconds remaining, and the Hokies won 77-72.

Those key timeouts used by Buzz Williams stopped the Duke runs, and the Hokies responded with a three-pointer both times, though the main focus of the timeouts was about defense.

Tech improved to 5-3 on the season without Justin Robinson, and picked up a much-needed fourth Quadrant One win for the NCAA Tournament committee to consider when they seed the Hokies.

Justin Robinson did not wear a walking boot for the first time since his injury, and Ahmed Hill noted after the game that the team does expect Robinson back.

“Yeah, for sure,” he said when asked whether they would get Robinson back. “I don’t know for sure [when the team will get him back] but when we do we’ll be 100%.”

North Carolina defeated Syracuse Tuesday night to help keep the Hokies in sole possession of fourth place in the conference. 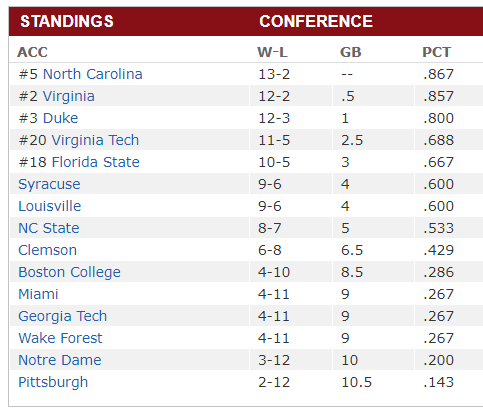 Virginia Tech will have the weekend off before returning to action at No. 17/18 Florida State next Tuesday night.  Tipoff is scheduled for 7pm, and the game will be televised by ESPNU.

The Hokies entered the game ranked 20th in the AP Poll and 19th in the USA Today Coaches Poll.

Kerry Blackshear led all scorers with 23 points. He also grabbed a game-high 10 rebounds. It is his seventh double-double this season and 11th of his career. It is his third consecutive double-double.

Nickeil Alexander-Walker scored 13 points and had six assists and four steals. He has scored in double figures 24 time this season.

Ty Outlaw scored 11 points, the ninth time this season he has scored in double figures.

The Hokies have now defeated Duke in Cassell Coliseum in each of the last three seasons, the first time that has happened. Duke has been ranked in the top 5 in each of those three games.

The 11 ACC wins this season is the most for the Hokies since joining the ACC in the 2004-05 season.

This is the first time a ranked Virginia Tech team has defeated a ranked Duke team.

Virginia Tech is now 3-18 all-time against teams ranked No. 3 in the AP poll. Tech’s last win over a third-ranked team was on Saturday, Dec. 12, 1964, a 69-64 win over No. 3 Vanderbilt in Cassell Coliseum. Tech is now 1-2 against Duke when the Blue Devils are ranked third nationally.

The Hokies have now defeated at least one Top 5 ranked team in each of the last four seasons.