Virginia Tech’s win, combined with other results around the ACC Saturday, puts the Hokies in sole possession of fourth place in the ACC at 10-5. 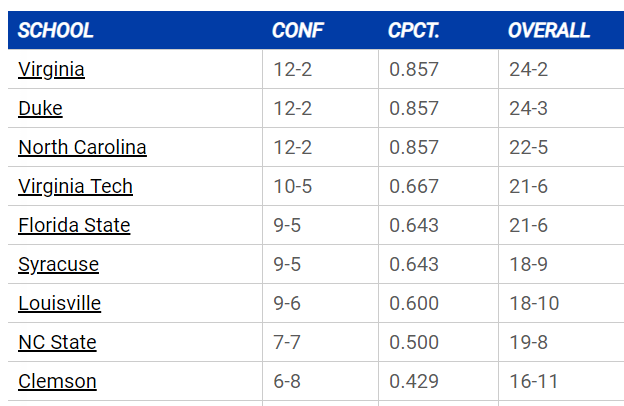 As has been the norm the last few games without Justin Robinson (who once again sat out with a boot on his injured foot), the Hokies weren’t very efficient offensively, but were led by another dominant performance from Kerry Blackshear, Jr. Blackshear scored 22 points and had 14 rebounds and three assists, leading the Hokies in all three categories.

There were few other bright spots for Virginia Tech offensively. Nickeil Alexander-Walker scored 12 points but was just 2-of-8 from the field, though he did break out of a recent free throw shooting slump to make all seven of his free throws. Alexander-Walker had two assists and five turnovers.

The Hokies as a team shot just 5-of-18 from outside, missing all six of their three-pointers in the second half. Tech as a team turned it over 16 times, compared to just ten turnovers for Notre Dame.

But the Hokies dominated several stats, outrebounding Notre Dame 49-27, including a staggering 18 offensive rebounds. The total rebounds and offensive rebounds were both season highs. Tech thus led second-chance points 15-11, and despite the turnover disparity, the Hokies outscored the Fighting Irish 19-2 in fast break points.

Wilkins was the only Hokie other than Blackshear to shoot over fifty percent for the game, making two of his three shots and scoring eight points and grabbing seven rebounds in 16 minutes.

Virginia Tech shot just 9-of-26 (34.6%) in the second half and missed all six of their three-pointers, but they held the Irish at bay by making 19 of 25 free throws and turning it over just five times after the break. For the game, Notre Dame had 25 fouls to 18 for Virginia Tech, as the Irish fouled late to try to come back. No one fouled out for Tech, and Blackshear finished the game with just three fouls.

Against Virginia Monday night, four Hokies played 40 minutes, but Tech head coach Buzz Williams was able to distribute minutes better this time around. Wilkins (16 minutes), PJ Horne (9 minutes), and Jonathan Kabongo (2 minutes) spelled the starters. Ahmed Hill played 38 minutes, Alexander-Walker 36, Wabissa Bede 35, Blackshear 33, and Outlaw just 31. Bede went 0-3 from the outside, running his string of missed three-pointers to 11 straight after an 18-of-38 start to the season, but he scored six points, had eight rebounds, and led the Hokies with three steals.

Virginia Tech’s next game is Tuesday night at home against Duke, who won on the road at Syracuse 75-65 Saturday night. Zion Williamson did not play against the Orange, and his status with a  sprained knee is day to day. The game is set for 7 PM and will be televised on ESPN. Buy your tickets from StubHub by clicking here.

– Blackshear has been on a tear as of late, scoring at least 20 points in his last three games for the first time in his career. In his last three contests, the Florida native is averaging 24.7 points, 12.0 rebounds and 2.0 assists, while shooting an impressive 71.4 percent from the field.

– With 10 ACC wins, the Hokies have now won exactly 10 league games for the fourth year in a row. The five conference road wins match last year’s total, which ties the best mark in the Buzz Williams era.

– The Hokies have won two straight on the road at Notre Dame for the first time in school history. Last year, Tech won 80-75 for its first win ever in Notre Dame.

– The Hokies were a force on the boards, winning the rebounding margin 49-27. The 22-board difference is their best this season in a league game and tied a season high versus North Carolina A&T on Dec. 19.