A not-so-funny thing happened on the way to that big February 22 dual meet showdown between NC State and Virginia Tech: both teams were upset last weekend.

At first, Pitt’s upset of NC State sounds like good news for the Hokies, but it will still be very difficult for Virginia Tech to win the ACC dual meet championship. Here are the standings after last weekend’s action:

And here’s the remaining ACC schedule: 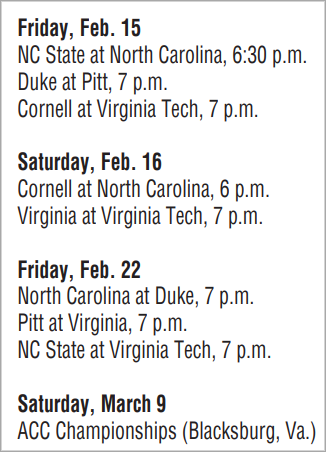 Virginia Tech’s best possible record is to close out by beating Virginia and NC State to finish 4-1 in the ACC, which would saddle NC State with two losses and eliminate them. In that case, UNC would have to lose to both NC State and Duke to finish 3-2 in order for Tech to win the dual meet championship. If the Hokies finish 3-2 instead (or worse), under no scenario can they win the dual meet championship.

So Virginia Tech’s best chance is to win out and hope for two UNC losses, the second of which (to Duke) is very unlikely.

As you can tell from previous articles on this site, we never saw this coming. It looked as if the VT-NC State collision was going to be for all the marbles, but UNC and Pitt put a stop to that.

No one likes to dwell on a loss — particularly to UNC — so we’ll make this brief. Here’s how it went, with Hokie wins in bold:

The Hokies were upset by the Tar Heels in part because nearly every close match went UNC’s way. The Tar Heels won two matches in “sudden victory,” which is wrestling’s overtime/sudden death, at 141 and 157 pounds. Out of five matches decided by two or fewer points, the Hokies lost four of them.

Three ranked Tech wrestlers were upset by unranked UNC wrestlers at 133, 197, and 285 (Hwt) pounds, and the Hokies didn’t return the favor when given the chance. At 149 pounds, VT’s Ryan Blees had a chance to knock off No. 4-ranked Austin O’Connor, but a late hands-to-the-face call on Blees resulted in a 2-1 loss.

The lower weight classes were disastrous for Virginia Tech, who fell behind 12-3. But even with that, the middle weight classes (165, 174, and 184) demolished their opponents and put the Hokies back on top, 14-12.

That left two ranked Virginia Tech wrestlers to bring it home against unranked opponents, but No. 7 Tom Sleigh and No. 18 Billy Miller were both beaten, and the next thing you know, UNC had shocked Tech on baby blue mats in front of a sparse crowd. (UNC’s recap of the meet didn’t even have a photo from the event, instead reusing a photo of a meet against Virginia.)

With the loss, as discussed above, the Hokies are all but eliminated from the ACC dual meet race. But remember that the ACC has a tournament championship, and it’s on March 9 in Blacksburg.

Virginia Tech as a team dropped from No. 11 in Intermat’s Dual Meet Rankings to No. 14.

Cornell and Virginia This Weekend

This weekend will be busy for Virginia Tech Wrestling. They tangle with No. 7 (per Intermat) Cornell on Friday night in Cassell Coliseum, and one night later, Tech’s annual meet in the Moss Arts Center happens, this time against No. 21 Virginia.

For what it’s worth, the dual meet predictor at WrestleStat predicts a close, 16-15 Cornell victory. The meet predictor sees Cornell winning the first four weight classes plus the 197 pound class.

The Virginia Tech athletic department is doing a giveaway Friday night for that meet:

🇺🇸 hat >> first 100 fans on Friday vs. Cornell
This Is Home t-shirt >> first 20 VT students on Saturday vs. UVA#Hokies 🦃 pic.twitter.com/hXjCFf7zML

In Saturday night’s showcase event — which will be the first time TSL has attended one of the annual meets in the Moss Arts Center (we’re looking forward to it, to say the least) — the Hokies will go up against in-state rival Virginia, whom Tech destroyed 37-5 in the Virginia Duals back on January 12.

In that previous meet, everything broke the Hokies’ way (in the same way it didn’t against UNC last weekend). The WrestleStat meet predictor has it much closer this time around, with the Hokies winning 21-13.

The Moss Arts Center seats 1,260, much less than the size of the average Virginia Tech wrestling crowd. Online ticket sales have ceased, but there are some walk-up tickets available. Here’s the info:

BUT … walk-up tickets will be available at the door 😃 AND VT students get in for FREE with student ID.

We'll see you there at 7 PM on Saturday! #Hokies 🦃 pic.twitter.com/NqlhrJI4E3

The meet with Virginia will be available for streaming, and you can watch it here.