No, that 47-24 score is not a misprint.  Virginia Tech held NC State to 14 points in the first half, and actually improved in the second half by holding them to 10 points.  The Wolfpack scored five points on their first two possessions of the second half, and managed just five more points in the remaining 18-plus minutes of the game.

Virginia Tech will be a part of the national discussion in the coming days because of the uniqueness of this game.  The final score sent reporters and ESPN’s researchers to the record books to see where this game ranks historically in terms of lowest points scored.  Here’s a recap of what they’ve dug up so far…

1: NC State’s 24 points is the lowest total by a ranked team in the shot clock era.

4: NC State’s 24 points are the fewest scored by a Division I team in this decade.

5: NC State’s 24 points are their fewest in a game since beating Duke 12-10 in the 1968 ACC Tournament.  That was the lowest-scoring game in ACC history.

There are probably more numbers that will come out throughout the course of the day and into tomorrow, but you get the point.  Saturday afternoon’s game was historical.

Perhaps the most amazing stat of the game is the fact that NC State, one of the nation’s best offensive rebounding teams, pulled down 14 offensive rebounds and scored just two second chance points.

Virginia Tech wasn’t particularly good offensively with Justin Robinson sidelined with an injury (he was in a walking boot on the bench) but it was good enough to nearly double up the Wolfpack.  The Hokies were 16-of-45 (35.6%) from the field and 7-of-21 (33.3%) from three-point range.  They missed their first five free throws, but made their final eight to go 8-of-13 (61.5%) from the charity stripe.

Tech struggled with turnovers in the first half, coughing up the ball nine times in the first half against a team that is one of the nation’s best at forcing turnovers.  However, miss after miss by the Wolfpack meant that they had very few opportunities to press past the halfcourt line, which is something that head coach Kevin Keatts likes to do.  The Hokies turned the ball over just three times in the second half, and outrebounded NC State 42-36 for the game.

Freshman guard Jonathan Kabongo played five minutes, but other than that the Hokies stuck with a six-man rotation against the Wolfpack’s nine-man rotation.  NC State struggled to get the ball inside the three-point line against Tech, as have most teams this season, which helped keep VT out of foul trouble.

Here’s a look at NC State’s shot chart from Saturday’s game, per ESPN. 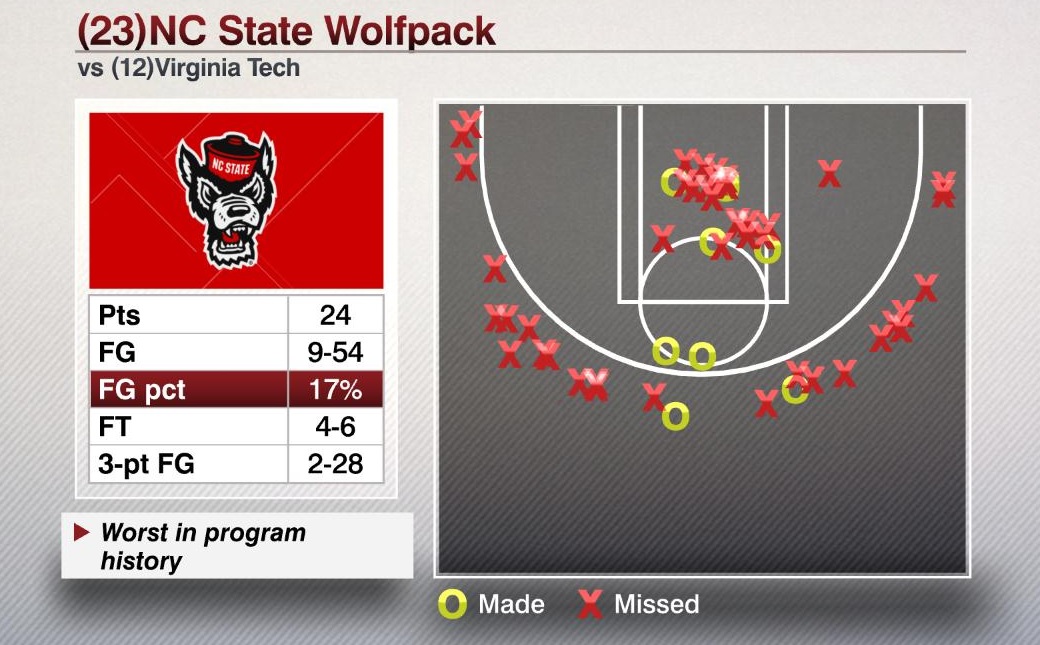 As you can see, over half of their shots came from outside the three-point line.

Virginia Tech led 20-14 at halftime, but an NC State offensive run was expected, as the Wolfpack averaged 88.4 points per game heading into Saturday’s contest.  After scoring five quick points in the opening 1:25 of the half, it looked like that run was going to come early.  However, it never came to fruition, as the home team managed just five points for the remainder of the game.

After NC State’s quick run cut the lead to 22-19, the Hokies quickly answered, with Kerry Blackshear scoring seven straight points to push the lead to 29-19.  The lead kept growing, as NC State did not make a field goal from the 18:35 mark of the second half to the 6:49 mark.  All they managed in between was one free throw by CJ Bryce.  As a result, the Hokies were able to gradually extend their lead and leave Raleigh with an easy, and historic, victory.

The victory is Virginia Tech’s third Quadrant One win of the season, all of which have come on the road.

The Hokies haven’t had an opportunity for a Quadrant One victory at home yet, but they’ll get that chance on Monday night when Louisville comes to town.  The Cardinals currently rank No. 13 in the NET, and are also ranked No. 15 in the AP Poll and No. 16 in the Coaches Poll.  Tipoff is scheduled for 7pm, and the game will be televised nationally by ESPN.