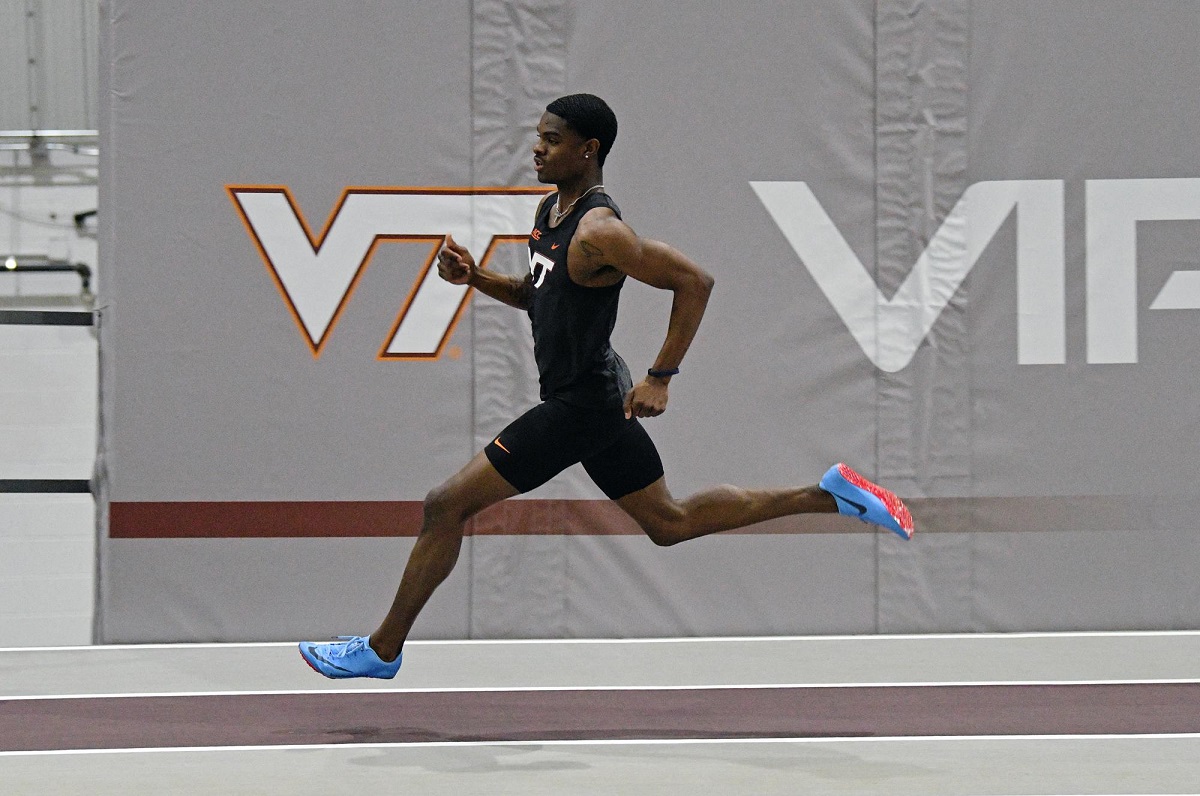 In his first collegiate meet, freshman Jacory Patterson made history in the 300-meters. With a time of 32.49 seconds, he became the U-20 Junior World Record holder for the event. It is the second-fastest time in collegiate history behind Torrin Lawrence’s time of 32.32.

During his recruitment to become a Hokie, Patterson chose Virginia Tech over two schools in his home state, Clemson and South Carolina.

“What got me was the visit and the feeling of being here,” Patterson said. “This visit was like a home away from home, and I felt most comfortable here. Distance or anything like that didn’t matter.”

Even in high school, back in Columbia, South Carolina, Patterson was a special athlete. He holds the school record for the 100, 200, and 400-meters, including the fastest 200-meter time in the state of South Carolina. Patterson also was a gifted athlete in the long jump and the triple jump. This versatility and production was what made him an ideal target for the Hokies.

“When I first saw a video of him running, I instantly called Coach [Dave] Cianelli and told him that we had to get this guy,” Virginia Tech Sprints Coach Tim Vaught said. “Jacory was a very good jumper as well, in high school, so I liked the fact that he was diverse. I knew he had the springs in his legs to be able to develop into a faster sprinter with the right workouts and training.”

Patterson had been proving that he was the prospect he was expected to be in practice, but he had not yet proven it in a meet. In early January, the Virginia Tech Invitational approached, and he was about to get his chance. When he did, he achieved so much more than he expected.

“At an intrasquad meet, I had run a 32.80 and we talked about going for the collegiate record, or a certain time like 32.50,” Patterson said. “After the race, I didn’t even know what I did until five minutes after the race.”

This run put his name in the history books early in his career, as he became the ninth-fastest American to ever run the 300-meters. No one expected Patterson to put up a time like that in his first meet, but there were signs that he was going to break out.

“You can’t predict that, but we had certain tests we did throughout the year that I saw a glimpse of, ‘Man, this guy is really good,’” Vaught said. “I knew if he competed the way that he was practicing, the times were going to come. I saw it at practice, but I didn’t want to say anything before it actually happened.”

His time at Virginia Tech has just begun, and Patterson is definitely looking to continue to improve throughout his four years here. With the way he has started his career, it looks like the possibilities of what he can achieve as a sprinter are endless.

The future looks bright for the young sprinter out of South Carolina. He also broke the school record for the 200-meter dash last weekend with a time of 20.84 at the Bob Pollock Invitational at Clemson. If he can accomplish so much in just a few meets, these records may be just the beginning for Patterson.

“I think the sky is the limit, if you stay healthy and stay focused, I think there is no limit on his full potential on the track,” Vaught said. “You’ve got to work hard to become great, but you have to work harder to stay great.”