No. 1 Virginia hosts No. 7 Virginia Tech Tuesday night, and it’s not just the first top ten matchup between the two schools: it’s the first matchup in the series with both teams ranked since 1995. Those are the Coach’s Poll rankings; the schools are No. 4 and No. 9 in today’s AP Poll.

On December 28, 1995, a Virginia Tech team that was coached by Bill Foster that was in the process of making the Hokies’ first NCAA appearance since 1986 met a UVA squad that would eventually flounder to a losing record under head coach Jeff Jones. At game time, the Hokies were 4-1 and ranked No. 21 by the AP; the Hoos were 4-2 and ranked No. 22.

The game, won 72-64 by the Hokies, was a turning point for both teams’ seasons. After the loss, the Cavaliers went 3-7 in their next ten games and plummeted from the rankings. UVA finished 12-15, with no postseason play, just the second time in 19 years the Cavaliers didn’t play on in some fashion.

After dispatching the Hoos, the Hokies won 14 of their next 15, eventually reaching a record of 19-2 before ending up at 23-6 with a second-round NCAA loss to Kentucky. At one point in late January, the Hokies reached a national ranking of No. 8, a program high that stood until last week, when Virginia Tech reached No. 7.

That was a long time ago. The schools have played 37 games since then, and while some have been classics, this is the first time since December 1995 that both teams will be ranked at game time. It’s only the third time in 147 meetings that both teams have been ranked.

And you can catch it on … Raycom. The ACC’s list of affiliates includes four stations in New York, three stations in Texas, and stations in Hawaii, California, Oregon, and Wisconsin, but stunningly, no stations in North Carolina, the heart of the ACC. Don’t believe that list of affiliates, though, because multiple tweets indicate that it’s … not exactly accurate. So check your local listings, and good luck.

Recent History of the Series

As inept as it is on the part of the ACC and ESPN to not make this game a national broadcast – the teams were ranked No. 5 and No. 15 in the preseason, go figure – let’s quit the griping and get back to the topic of the game.

The Hokies have fielded some atrocious basketball teams since Bill Foster retired, under Bobby Hussey (23-32 at VT), Ricky Stokes (45-70), and James Johnson (22-41). Hussey, Stokes and Johnson went a combined 1-9 against the Cavaliers. 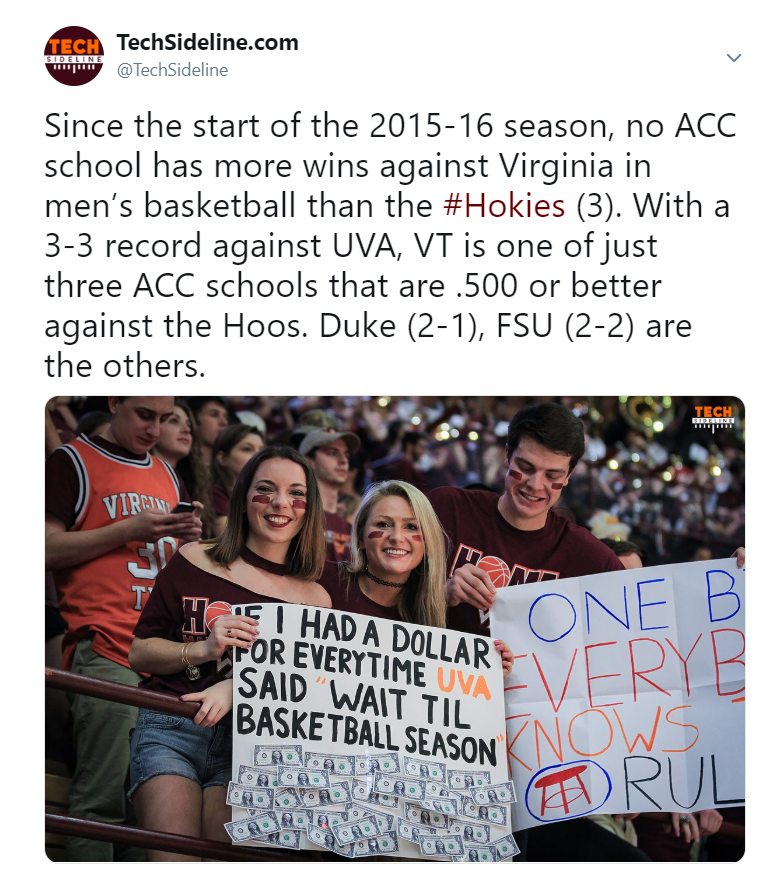 (Note that FSU’s 2-2 record includes a loss to Virginia this season.)

Especially sweet was the Hokies’ shocking win in Charlottesville last year on February 10, as No. 2 Virginia was on the cusp of attaining the top spot in the polls. The Hokies spoiled that with a dramatic overtime win.

Well, Virginia Tech didn’t really spoil it; Virginia was ranked No. 1 the following Monday, anyway. But the Hokies did ruin the party that weekend.

Everyone talks (and talks, and talks, and TALKS) about the Cavaliers losing to 16-seed UMBC in the NCAA Tournament, but Hokie fans should stop trotting out that tired old joke and focus instead on what Virginia Tech accomplished with that February win in Charlottesville. Virginia went 20-1 in ACC play last season, including 17-1 in the ACC regular season and 3-0 on their way to the ACC Tournament Championship. That loss to the Hokies was their only ACC loss last season.

The Cavaliers are 38-2 in their last 40 games. The “2” belong to UMBC, of course, and the Hokies. Tony Bennett’s program is humming at peak efficiency, but Buzz’s guys still snuck one in on them.

What does all this mean for Tuesday night’s game? Not a hill of beans. For me, the game has an odd big/not big feel to it. It’s big from the standpoint that, yes, it’s a matchup of top-ten teams. But what is really on the line? Not a lot. This isn’t a tournament game or a clash of unbeatens (though it almost was the latter; thanks, Penn State). This game, or the rematch on February 18, which will be televised by ESPN, isn’t likely to decide the ACC regular-season title.

I think it’s one of those situations where, if the Hokies lose, it’ll be no big deal. It’s a road game against one of the top teams in the nation, and the Hokies’ two true road games this year have been disasters: a horrid 63-62 road loss to a less-than-mediocre Penn State team, and an eyeball-searing 52-49 win over Georgia Tech that saw the Hokies shoot 29.8%, their worst shooting performance in (by my count) 90 games, since shooting 29.6% against Miami back in February of 2016.

This is a chance for Virginia Tech to take their temperature against one of the nation’s top teams and figure out how good they might be. Today’s NET rankings (the RPI replacement) have the Hokies at a lofty No. 8, not to mention being No. 7/9 in the major polls, but are they really that good? Tuesday won’t tell the full tale, but it’ll give us a clue.

Embedded in that 3-3 record against Virginia the last three seasons is an ugly side: when Virginia Tech wins, it’s just barely, and when Virginia wins, it’s a blowout. Tech’s three wins are by a total of five points, and two of them came in overtime. Virginia’s three wins are by an average of 22.3 points, including a 26-point demolition of the Hokies in Blacksburg last season.

So Tuesday’s game in Charlottesville could go sideways for the Hokies. If it does, don’t freak out. If it doesn’t, then enjoy it.

As noted above, Virginia leads the overall series 91-56.

Despite Virginia’s stretches of dominance in the series at times, the Cavaliers have never, ahem, won 15 straight against the Hokies. The longest winning streak for either team stands at nine games, accomplished once by Virginia (1977-1983) and twice by the Hokies (1958-1964, 1947-1951).

The two schools played on campus and at neutral sites from 1915 to 1975. Then they played at neutral sites, almost exclusively Richmond and Roanoke, for nearly a quarter century, from 1976 to 1999. The series returned to on-campus sites with the 2000-01 season, and of course, has stayed there since Virginia Tech’s entry into the ACC in 2004-05.