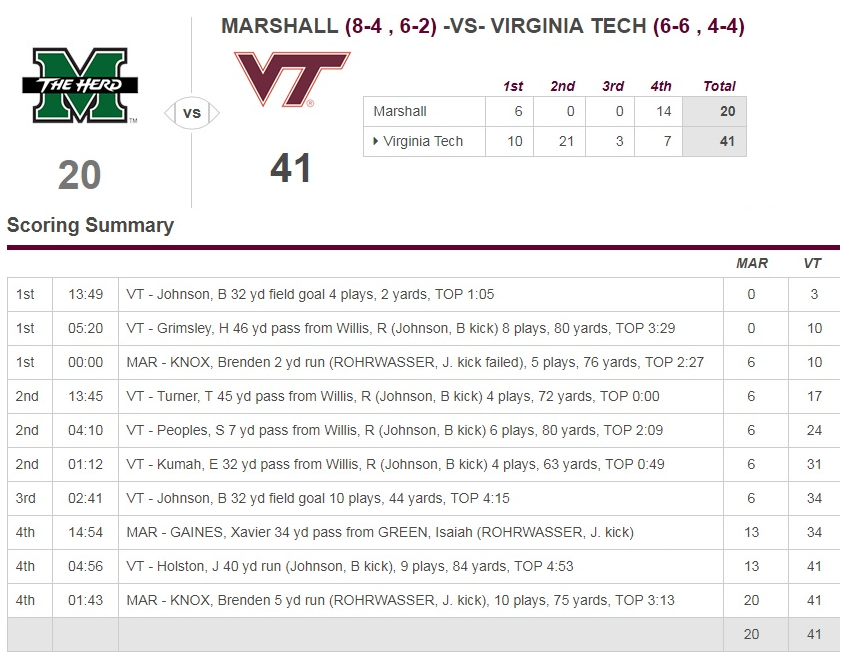 Bowl streak extended. No more asterisk needed. Virginia Tech now officially owns the longest active bowl streak in the nation following a 41-20 triumph over Marshall for its sixth win of the season. The Hokies are now 33-0 in non-conference games inside Lane Stadium when scoring 30+ points. 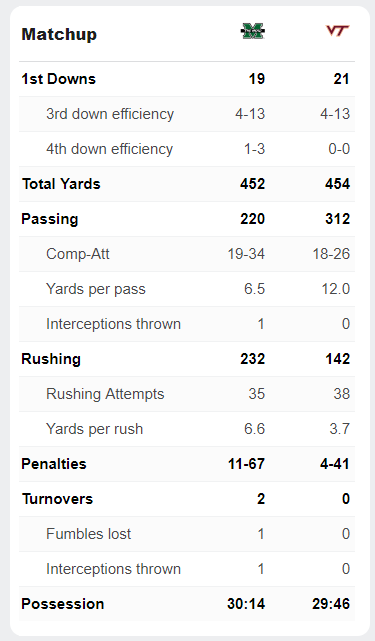 It took a rescheduled opponent and some grit in the final two games, but Virginia Tech’s 26-year bowl streak tops the list, even if Hokies fans had already been claiming the longest active bowl streak record because of the Seminoles academic cheating scandal in 2006 and 2007.

“Certainly getting to the No. 26 was a part of this, but I really felt it was bigger than that,” head coach Justin Fuente said. “Those kids in the locker room, they stood tall and stood strong when other people ran and things weren’t well. They continued to battle and found a way to keep the two streaks alive.”

Virginia Tech (6-6, 4-4 ACC) played a complete game in a half-empty Lane Stadium filled with 31,336 fans. Marshall (8-4, 6-2 C-USA) came into Saturday’s contest with the No. 18 defense in terms of yards allowed per game, but the Hokies had their way, particularly early.

Ryan Willis passed for 312 yards on 18-of-26 passing and threw four touchdowns. He was lights out in the first half, connecting on 12-of-16 passing for 254 yards and those four touchdowns. Virginia Tech entered half time with a commanding 31-6 lead.

“The thing about Ryan is he lays it all on the field,” Fuente said. “He plays as hard as he can play. He made some plays for us, particularly in the first half, to really come set the tone and establish momentum in the football game.

“This is a kid that came in, and he was a backup. He kept plugging away, and he kept trying to learn. One of the neatest things about coaching is when your kids have success, you know they worked so hard to try to get where they’re at.”

In the second quarter the offense exploded, giving the fanbase a taste of what many expected all year. Willis threw touchdown passes to Tre Turner (45 yards), Steven Peoples (7 yards), and Eric Kumah (32 yards) in the quarter as the Hokies steadily extended their lead. The Overland Park, Kansas native continually felt pressure and stepped up in the pocket to make plays.

Jalen Holston broke free of a would-be tackler and scampered for a 40-yard touchdown in an otherwise uneventful second half.  Holston’s touchdown put the Hokies up 41-13, though Marshall tacked on a late touchdown against the backup defense to make the final score 41-20.

Willis has now found the endzone 22 times through the air on the season. He’s the third consecutive quarterback to rack up 20+ passing touchdowns, all under the Justin Fuente and Brad Cornelsen regime. Jerod Evans tallied 29 in 2016, and Josh Jackson had 20 last year.

“I hadn’t thought of that,” Fuente said. “I think Brad has a unique gift of crafting the offense to give the quarterback, whoever he is and whatever his skill set is, the opportunity to succeed. That’s a lot easier said than done… I’d like to not rotate those guys every single year. I’d like to have the same guy in there.”

Three other quarterbacks have reached that mark in Virginia Tech history…Maurice DeShazo in 1993, Bryan Randall in 2004, and Tyrod Taylor in 2010.

Not to be outdone, the defense played with an edge from the start. On the first play of the game, Ricky Walker strip sacked Marshall quarterback Isaiah Green in his last game inside Lane Stadium. TyJuan Garbutt recovered the fumble for the turnover.

“I’m happy for Ricky because he’s a guy who’s just put so much into this program,” defensive coordinator Bud Foster said. “He’s been a big factor in our turnaround, even though this year was not the year as a senior you’d want. He’s been a big, big part of the transition.”

Bryce Watts also picked up his first-career interception in the corner of the endzone with 8:49 in the first. It was Virginia Tech’s first interception since October 6 against Notre Dame.

The Hokies were gashed at points by the Thundering Herd’s Brenden Knox, who finished with 27 carries for 204 yards and two touchdowns, but Foster’s unit used a ‘bend but don’t break’ mentality to limit Marshall to just 20 points, including a garbage time score. Marshall was 4-for-13 on third down. Mike linebacker Rayshard Ashby tied a season-high with 15 tackles, the third time he’s finished with double-digit tackles this year. Dax Hollifield added nine tackles on his birthday.

“[Ashby] has continued to get better,” Foster said. “He’s a tackling machine. I don’t know if he’s quite full speed… he’s just a competitor. He’s become a really good leader for us. I really like that group with Rayshard, then you pair him with Dax. Those are two guys who have great leadership qualities.”

Perhaps of the greatest importance, Virginia Tech and its young team get another month to practice before the bowl game. Those extra reps could be critical for the development of some of the players, especially Quincy Patterson, Caleb Farley, and even Devon Hunter, among others.

“We need the time in the weight room when we’re not practicing,” Fuente said. “We’re such a young team that the extra time is huge for us in terms of practicing. Obviously, Ricky Walker doesn’t need a lot, but there’s a lot of freshman out there that certainly do. It’s going to be big for them.”

While the season wasn’t what some were expecting, let’s not knock the fight of Virginia Tech down the stretch. The Hokies pulled out an against-all-odds victory over Virginia to keep the Commonwealth Cup for the 15th straight year, and dismantled Marshall in a lethargic atmosphere to keep the bowl streak alive. As a side note, Fuente and Co. will have quite a quarterback battle next year with Willis, Patterson, and Jackson all returning. The future is bright, and there’s one more look at this year’s version sometime in late December.

“These last two wins make up a lot for the season,” Walker said.

“I think we grew inch by inch rather than leaps and bounds,” Foster said. “It’s not how you start, it’s how you finish.” 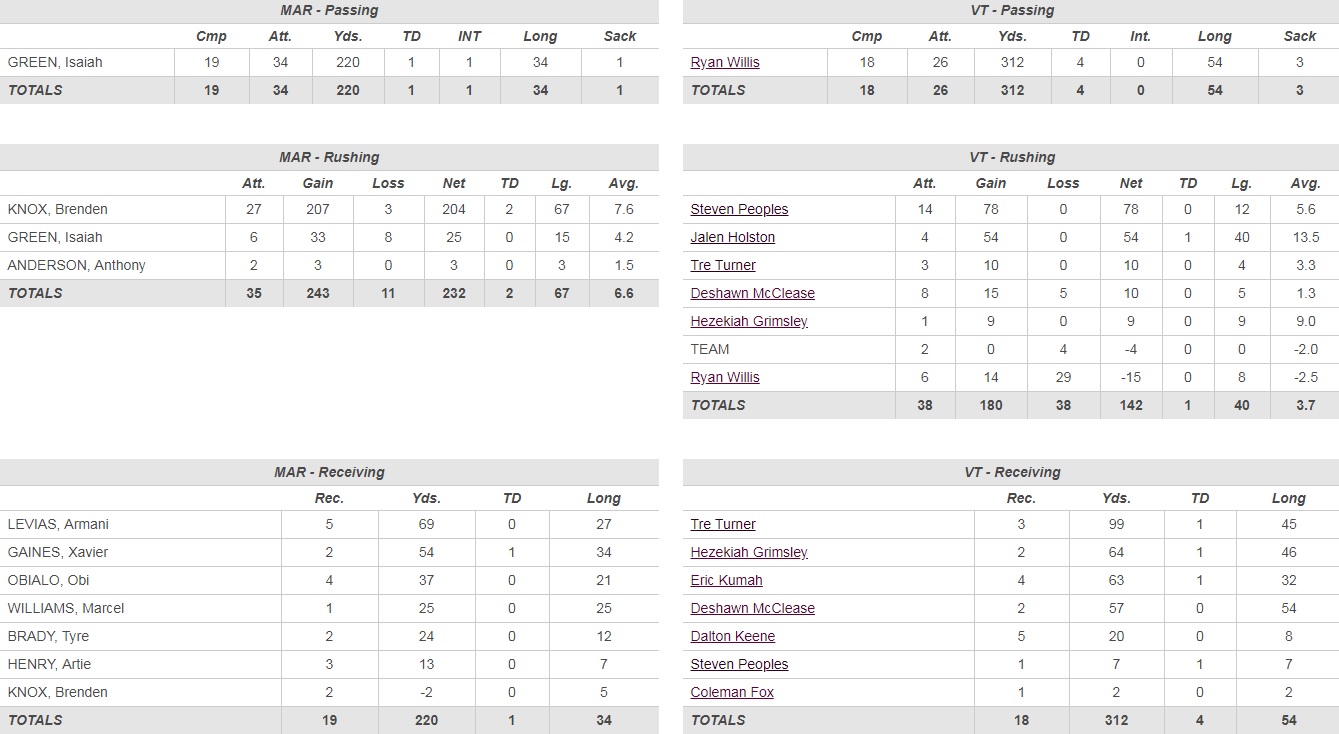