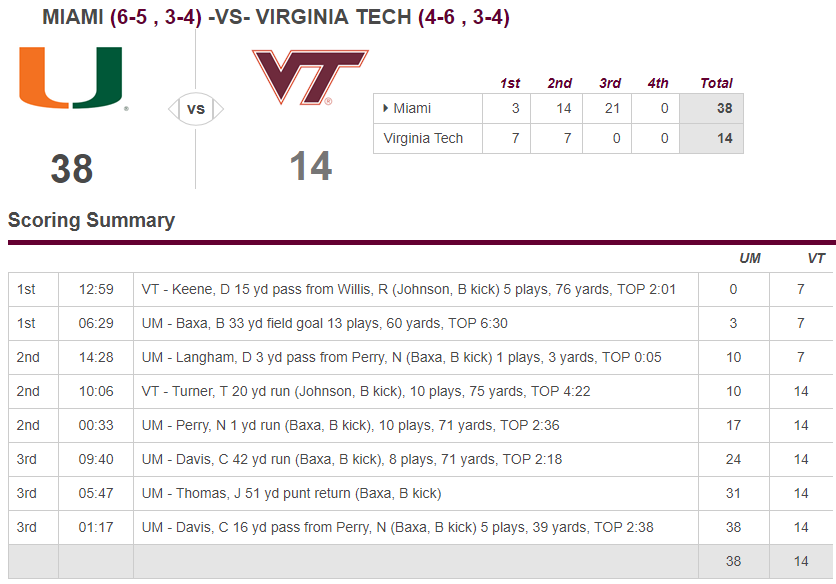 Blacksburg, VA — After Virginia Tech defeated North Carolina earlier in the season in improbable fashion, head coach Justin Fuente acknowledged that every game was going to be a “four-hour stomach ache.” It’s been nothing but the truth, as Hokies fans have been nauseous watching the performance on the field in recent weeks. Miami (6-5, 3-4 ACC) dismantled Virginia Tech (4-6, 3-4 ACC) 38-14 at Lane Stadium on Saturday afternoon.

“This is the youngest team I’ve ever coached,” Fuente said. “Have I ever coached on teams that have struggled before? Absolutely. That’s part of coaching. I love the way our kids are coming to work. Our practices are energetic and focused. I told the guys I still believe in them. 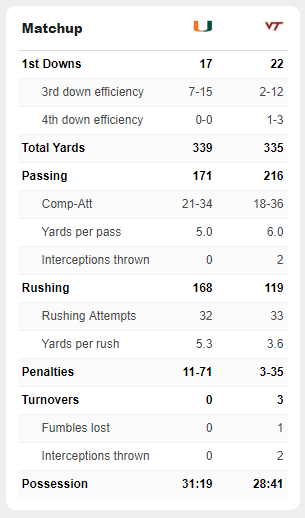 “I’m sure they’re [the fans] upset,” Fuente said. “They’re not more upset than I am. I can promise you that.”

It was another poor offensive showing for Virginia Tech coming out of the locker room in the second half. The Hokies’ four drives that ended in the third quarter went for 37, 23, 5, and 6 yards. That included a missed field goal, a Damon Hazelton fumble, and two three-and-outs.

In the four losses at home, where the Hokies are 1-4, they have been outscored in the third quarter 63-0.

“We missed a field goal, we fumbled, and we had a holding penalty on offense,” said Fuente, offering a play-by-play account instead of a structured analysis. “On defense, they lined up in 2×2, they ran the zone, pulled it and gave it some. We gave up a punt return. There it is.”

Leading 17-14 at the half, Miami outscored Virginia Tech 21-0 in the third quarter. After Virginia Tech limited the Hurricanes to just 40 yards rushing on 14 carries in the first half, Miami’s Cam’Ron Davis pierced the Hokies’ defense for a 42-yard touchdown.

“I blitzed up the pipe,” said defensive coordinator Bud Foster, who called plays from the box for the first time in his career because he was dealing with an illness. “We’ve called the defense, but probably not in that situation in a while… That’s on me. You take that out of it, and I thought our gap fits were in check for the most part.”

Following a Virginia Tech three-and-out, Miami’s Jeff Thomas fielded a punt off the bounce and dashed down the sideline for a 52-yard touchdown.

“There certainly was a moment of relaxation there,” Fuente said. “You could see it on the field. I have to watch the film before I make a judgment on it, but I felt like when he pointed and the ball hit the ground, there was a bit of relaxation there. He is so fast.”

Adding insult to injury, Virginia Tech went three-and-out again before N’Kosi Perry connected with Davis for a 16-yard touchdown, growing the lead to 38-14.

The Hokies opened the game with a 5 play, 76-yard drive that ended in a 15-yard touchdown pass from Ryan Willis to Dalton Keene. With 10:06 in the second quarter, Tre Turner galloped 20 yards into the end zone on a jet sweep. Virginia Tech did not score in the final 40 minutes and six seconds of the game. Willis finished 18-of-36 for 216 yards, one touchdown, and two interceptions.

“It’s kind of felt like the same story week-after-week,” Keene said. “You see in that first half when we execute what we’re capable of. We’re just trying to hold on to the rope right now.”

Miami came into Saturday’s game looking to avoid a five-game losing streak and did just that. In the previous four games, the Hurricanes’ offense had only mustered point totals of 21, 12, 14, and 13. Perry was 21-of-34 for 171 yards and two touchdowns. More importantly, he did not turn the ball over, and Miami won the turnover battle 3-0.

“He managed the game well,” Miami head coach Mark Richt said. “He didn’t throw any picks, didn’t fumble the ball. You could just see his comfort level rising. One day, I believe you’ll see him really come into a zone, and he’s working to that right now.”

Virginia Tech has now lost four straight games, all by double digits, for the first time since 1978. If not for forcing a fumble at the 1-yard line and a subsequent 18-play, 98-yard game-winning drive against North Carolina, the Hokies could be staring a six-game losing streak right in the face.

What once was a home field advantage has been non-existent in 2018. Virginia Tech is 1-4 at home, and they haven’t beaten an FBS opponent in Blacksburg this year. Last year’s 20-14 win over Pitt on November 18 was the last such win.

“We want to do well for our fans,” Fuente said. “We want them to have success. An element of that is performing for the people who appreciate the work we put in… I’ve never been more confident in the future of this football program than I am right in this moment. That doesn’t make me feel any different about tonight.”

Virginia comes to town on Black Friday looking to end its 14-game losing streak against Virginia Tech. The Hokies will need to win that game and a potential scheduled game against Marshall to extend its 25-year bowl streak. 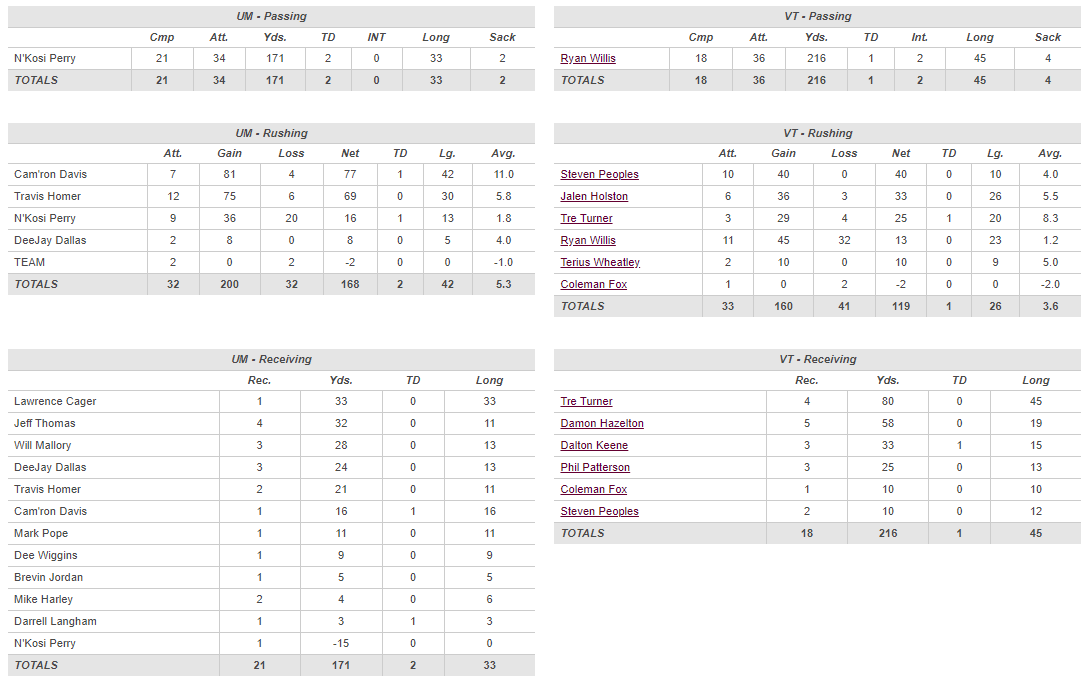