Heading into the first week of the season, Miami was ranked No. 8 in both polls, while Virginia Tech came in at No. 17 in the Coaches Poll and No. 20 in the AP Poll. At that point in time, most people thought this November 17 matchup would decide the Coastal Division. How silly do we look now?

Virginia Tech heads into Saturday’s game with a 4-5 overall record, including a 3-3 mark in the ACC. This was a team that was once 3-0 in league play, but they’ve lost three games in a row overall, and four of their last five. Miami hasn’t been much better. The Hurricanes are 5-5 overall, and just 2-4 in the ACC. They’ve lost four games in a row, by the following scores…

It’s pretty easy to see what Miami’s issue is…it’s their offense. They are also a big, late comeback away from losing five games in a row. They trailed Florida State 27-7 with five minutes left in the third quarter before rallying to win 28-27. That game probably says more about the Seminoles than it does the Hurricanes. FSU hasn’t exactly distinguished themselves this year either, and right about now we’d all be all giddy about their bowl streak coming to an end and the Hokies being on the way to having the longest undisputed bowl streak in the country, were it not for Tech being 4-5 and in grave jeopardy of its own bowl streak ending.

Most Virginia Tech teams through the years would hammer this Miami team. This Miami offense would be somewhat fortunate to score double digits on most of Bud Foster’s defenses through the years. But that’s not the case this year. This is a unique case of the stoppable force, being the Miami offense, versus the penetrable object that is Virginia Tech defense. It’s a pretty sad subject to write about, but let’s get on with it. 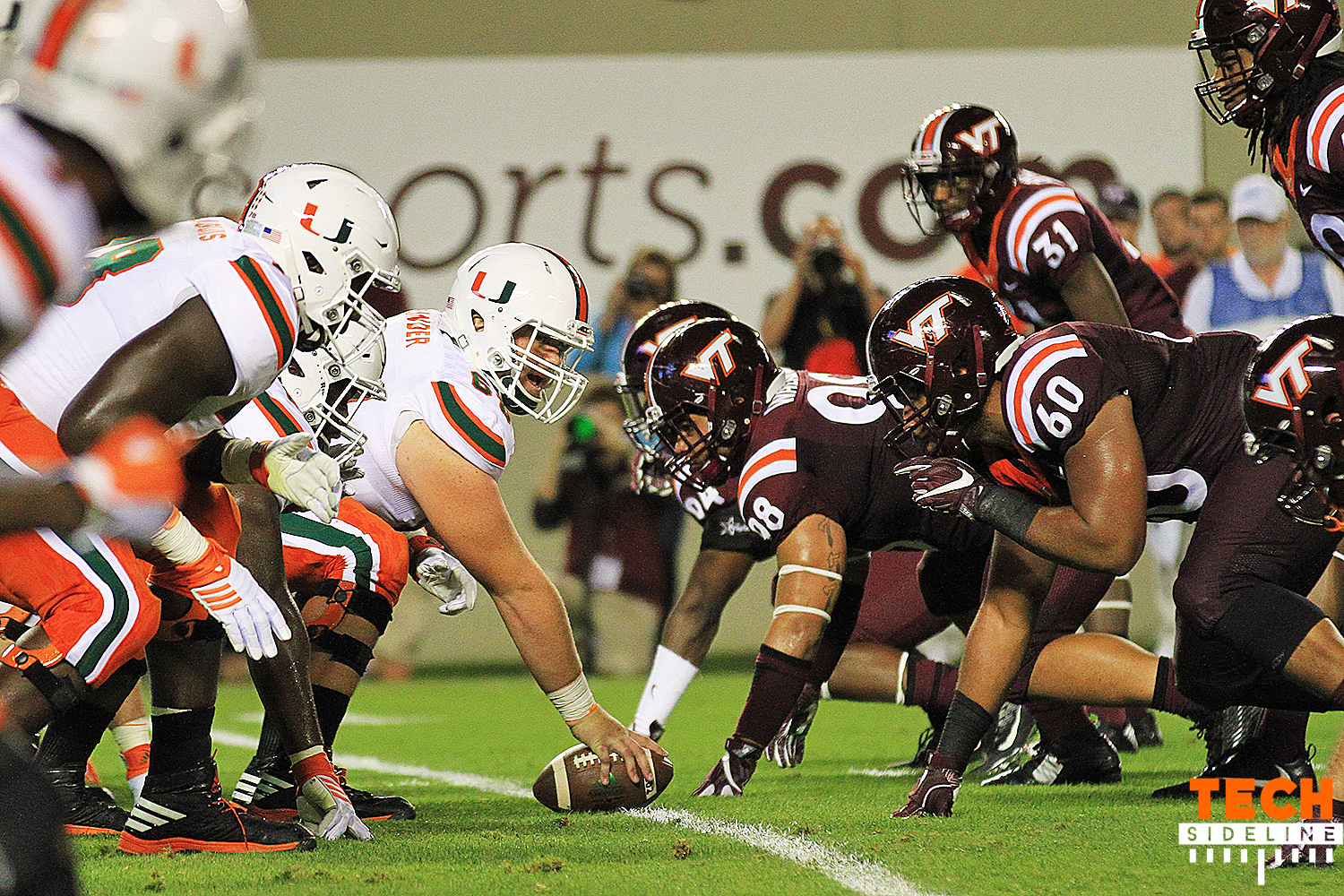 Miami has been pretty dreadful at the quarterback position this year, and Mark Richt has resorted to doing the thing that coaches shouldn’t do, but often do anyway…rotate quarterbacks when both guys are struggling.

Malik Rosier (6-1, 212, r-Sr.) wasn’t very good last year, and it was never a given that he would retain the starting job this year. Young N’Kosi Perry (6-4, 195, r-Fr.) was expected to challenge him for the starting job, and he eventually did, and took over the starting position. However, after Perry proved ineffective as well, Richt has been using both guys, and it’s not working. Here are their passing numbers for the season…

At first glance, the choice is simple. Perry, being the younger player, should be the guy. But it’s not that simple. Rosier is the better runner, with 210 yards and 3.9 yards per carry to Perry’s 96 yards and 2.2 yards per carry. Also, it’s not like Perry has distinguished himself in recent games….

Perry has not thrown a touchdown pass since October 6, and he’s completed just under 50% of his passes in that span. As a comparison, here are Rosier’s numbers in those same four games…

Rosier at least completed just over 50% of his passes in that span, and he did manage to throw one touchdown pass against Boston College. Perry’s overall TD-INT ratio is better for the season, but he racked those numbers up against bad competition, including a 4-TD/0-INT performance against a tanking Florida State team.

Right now, at this moment in time, Malik Rosier looks like the better option, but you’re splitting hairs. In reality, there is no good option, and it seems like Mark Richt is just picking a quarterback at random on a week to week basis. I’m guessing he’s rewarding whichever guy had the best week of practice, but it doesn’t seem to matter. Both guys have been awful, and there is no good choice.

If I were Richt, I would go with the younger guy, but I understand his position. His team is 5-5, and they have to beat either Virginia Tech or Pitt to qualify for a bowl. It’s not easy to go with a freshman in that situation. It’s not easy to go with Rosier, either, however. Like I said, this quarterback situation is just about as ugly as UNC’s was last year. The only difference is that Miami has a really good defense, and UNC did not.

For the record, I don’t think all of their issues can be pinned on the quarterback. When you are struggling to score 20 points, it’s clearly more than one person’s fault. Still, I think quarterback is the biggest issue. I would expect Miami to come out and try and establish the running game early and often behind their two solid tailbacks.

Those are two good tailbacks for the Hurricanes, but the fact that they’ve only combined to score eight touchdowns in 10 games shows how limited the Miami offense has been this season. If Virginia Tech can somehow find a way to be as good against the run as they were against Boston College two weeks ago, they’ll have a legit shot to win the game. However, if they come out and play like they did against Pitt or Georgia Tech, then it won’t matter who is behind center for the ‘Canes.

The Miami Defense: The Best Unit on the Field

I’d normally be licking my chops in a matchup like this, with such bad quarterback play against the Virginia Tech defense. We saw what the Hokies did to UNC last season when they faced such bad quarterbacks. But this Miami defense is a much different breed than the Tar Heel defense. This is one of the best defenses the Hokies will face all season.

Here are some numbers on the Miami defense…

The Hurricanes have had a little bit of trouble allowing big plays, but even their No. 52 ranking in that category is above average. This is an outstanding defense, and they’d probably be even better if they could get any kind of help from their own offense.

Defensive coordinator Manny Diaz loves to blitz. In fact, he goes after the quarterbacks so much that it actually makes the Hurricanes more susceptible on third and long situations. Miami ranks just No. 81 nationally in S&P+ defense on passing downs. That is perhaps their only blemish as a defense, but they’ll be facing a Virginia Tech offense that ranks No. 72 nationally in S&P+ offense on passing downs.

Miami has the most experienced trio of junior linebackers in the country. All three players have been starting since they were true freshmen in 2016.

This will be as good a group of linebackers as the Hokies have faced this season.

Up front, Miami has several defensive players who have had dominant seasons.

That’s a dominant group. Willis has nearly three times as many tackles for loss (17) as every defensive tackle on Virginia Tech’s team combined (6.5). That’s almost hard to believe.

Miami has plenty of veterans in the secondary, as the Hurricanes start three seniors and a sophomore. They are also extremely talented. Here are their NFL Draft Scout rankings, in terms of how they rank for the NFL Draft at their projected professional positions…

That’s a talented group, and as good as the Tech receivers have been at winning jump balls this year, they are going to find it a lot tougher to do against Michael Jackson. The other cornerback is Trajan Bandy (5-8, 188, So.), and he’s a better target, but he’s tied for the team lead in interceptions with three.

When I look at this Miami defense from a personnel standpoint, I really don’t see a weakness, and that’s very concerning.

Will Stewart nailed it in yesterday’s TSL Podcast. Miami has the best unit that will be on the field on Saturday…their defense. Both offenses leave a lot to be desired, for different reasons. But Tech’s defense is bad, and that Hurricane defense is good, despite their four-game losing streak. I believe their defense will be the difference in this game.

Also, I’ll make myself look bad and note that I’ve been overestimating Virginia Tech’s scoring, and underestimating their opponents’ scoring, in just about every single game this year. Let’s go back and take a look…

In six of the last eight games, Virginia Tech has scored fewer points than I thought they would score, including each of the last four games.

Now, for the defense.

In six of the last eight games, the Virginia Tech defense has allowed more points than I predicted…and I picked them to give up 30+ points in three of the games that I got wrong!

No more of that. I think I said Miami 27-20 or something like that in yesterdays’ Podcast. Based on the my picks in the last eight games, that’s probably pretty generous. I’m going with the ‘Canes by a relatively healthy margin. As bad as their offense has been, they haven’t met the Virginia Tech defense yet. I’m actually going to pick them to score 30 points for the first time since September 27, when they dropped 47 on UNC. If I’m way off on the score again this week, I’m just going to pick two random numbers out of a hat next week for the UVA game.

But, as for the Hokie offense? I’ve been dead-on with them since the ODU debacle. On average, my predictions have been almost exact: I’ve been off by 0.17 ppg on predicting what the Hokie offense will do (predictions; 24.33 ppg, actual 24.5 ppg). I haven’t missed a single game by more than six points.

That’s because the Hokie D has been all over the map, while the offense has been pretty consistent, struggling to score 30 points.

This one isn’t complicated. I don’t like VT’s offense against that Miami defense. The Miami DL might just completely blow up the middle of the Hokie offensive line. The best hope for Virginia Tech is that Miami, playing their fourth road game in their last five outings and riding a four-game losing streak, will fold up if Virginia Tech somehow gets two quick scores.

My prediction is very similar to Chris’s, which is common, even though I don’t usually read his before making mine.