We’ll know a lot more about this Virginia Tech basketball after this weekend. The Hokies will play three games against good competition between now and Sunday in the Charleston Classic in Charleston, SC. They’ll face a quality Ball State team on Thursday, and other possible opponents include Alabama, Wichita State, Purdue, Appalachian State, Northeastern and Davidson.

Virginia Tech is at a bit of a disadvantage, despite being the highest-ranked team in this tournament. The Hokies were supposed to play two games before this tournament. They were originally going to play Kentucky in Madison Square Garden this past weekend, and would have pushed their season opener up to the middle of last week (probably Tuesday). Instead, Kentucky canceled the game, and Buzz Williams ended up replacing them with a December matchup against Washington in Atlantic City. That means Tech will be the only team in this tournament who has played just one game. Everyone else has played two.

Williams wasn’t pleased about that one game, either. He described Tech’s defensive performance as “really bad” following the Hokies 87-59 victory over Gardner-Webb. The Hokies will have to get better quickly, because the Charleston Classic features some really good teams who could all conceivably make the NCAA Tournamen this season.

Here’s a look at the bracket. 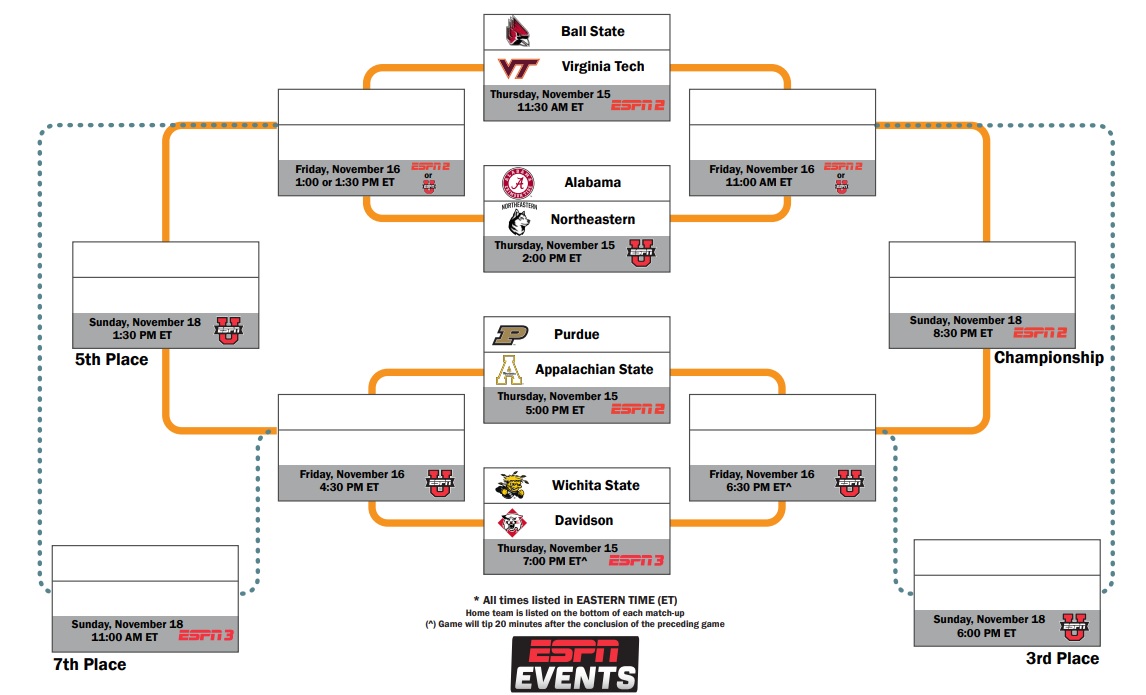 The Hokies will begin play on Thursday against Ball State. Tipoff is scheduled for 11:30am, and the game will be televised nationally by ESPN2.

Ball State is a much better team than your average fan realizes. They are 1-1 on the season, with an 86-69 victory over Indiana State, and an 84-75 defeat at the hands of No. 23 Purdue on the road. They are a very experienced team, and have a couple of SEC transfers.

The transfers of Hazen and Walton have pushed a starter to the bench. Trey Moses (6-9, 245, Sr.) was a Third Team All-MAC selection last year, averaging 11.3 points and 8.2 rebounds per game. He’s also been named to the All-MAC Defensive Team. Yet now he’s coming off the bench. Persons is considered the best player, being named First Team All-MAC Eastern Division in the preseason.

Ball State was predicted second in their division, receiving 11 first place votes to Eastern Michigan’s 17. While Buffalo (who won at #13 WVU last Friday) is widely expected to win the conference, the Cardinals are one of the other top teams in the league, and they’ll likely flirt with an NCAA Tournament bid. The No. 16 Hokies will be on upset alert. If they win, this could potentially be a quality victory for their NCAA Tournament resume.

The rest of the field is strong as well. Purdue is ranked No. 23 in the country. Alabama received 11 votes for the top 25, and even Davidson got a vote as well. Throw in the perennially good Wichita State Shockers, and this is a deep field. If the Hokies get through the weekend unscathed, then they’ll have a very impressive early season resume.

If the Hokies beat Ball State, they’ll face the winner of Alabama-Northeastern on Friday at 11am. Tipoff time is important. Tech’s Thursday game ends at approximately 1:30pm, while the Alabama-Northeastern game will end around 4pm. Tech will have about 2.5 more hours of rest between games than their opposition. The Championship Game will be held on Sunday at 8:30pm.

Let’s go into a small amount of detail about Virginia Tech’s other possible opponents.

Alabama (2-0): No. 7 out of 14 teams in the SEC Media Preseason Poll. The Crimson Tide lost Collin Sexton to the NBA, and he’s having a good rookie season. This team probably won’t be quite as good as they were a year ago, but they should still be solid. They knocked Virginia Tech out of the NCAA Tournament in the first round a year ago, so we could be looking at a potential rematch. Watch sophomore guard John Petty. He’s capable of having a big night from behind the three-point line.

Purdue (2-0): The Boilermakers are ranked No. 23 in the country with wins over Fairfield and Ball State. They were picked No. 5 in the Big Ten in the unofficial media poll (the Big Ten doesn’t have an official media poll…read about that here if you have a subscription to The Athletic). Matt Painter has taken Purdue to the Sweet 16 each of the past two years, and to the NCAA Tournament in each of the last four. Carsen Edwards of Purdue was picked to be a First Team All-Big Ten performer, and received 23 of 28 votes for Big Ten Player of the Year. He is one of the top players the Hokies will face all season.

Wichita State (1-1): The Shockers opened with a bit of a surprising 71-58 loss to Louisiana Tech, but they rallied to defeat Providence 83-80. However, Gregg Marshall’s team isn’t expected to be as good as usual this season. They were picked just eighth in the 12-team American Athletic Conference. Forward Markis McDuffie is the player to watch. He is a Preseason Second Team All-AAC player.

Davidson (2-0): The Wildcats are 2-0 on the young season, with victories over Cleveland State and Dartmouth. They were picked third in the Atlantic 10 by the media in October. (Saint Louis, who upset the Hokies about this time last year, is picked to win the A-10.) Kellan Grady of Davidson is a Preseason First-Team All-Atlantic 10 player. He’s a 6-5 sophomore wing who was the Atlantic 10 Rookie of the Year last season. Bob McKillop has been Davidson’s coach since 1989.

Northeastern (1-1): Northeastern is 1-1 this year, with a narrow three-point loss to Boston University, and an 81-71 victory over Harvard. They won 23 games a year ago and return all five starters. They were picked first in the Colonial Athletic Association by the media, receiving 35 of 40 first place votes. Vasa Pusica, a 6-5 wing, is a First Team All-CAA Player. He shot 42.7% from three-point range a year ago.

The Charleston Classic promises to be one of the most competitive tournaments in all of college basketball this year. Every team in the field, with the exception of Wichita State, was picked to finish in the top half of their league, and it’s still likely that the Shockers will field a competitive team. No matter what happens with Ball State on Thursday, the Hokies will get two more chances to pick up quality wins over the weekend.