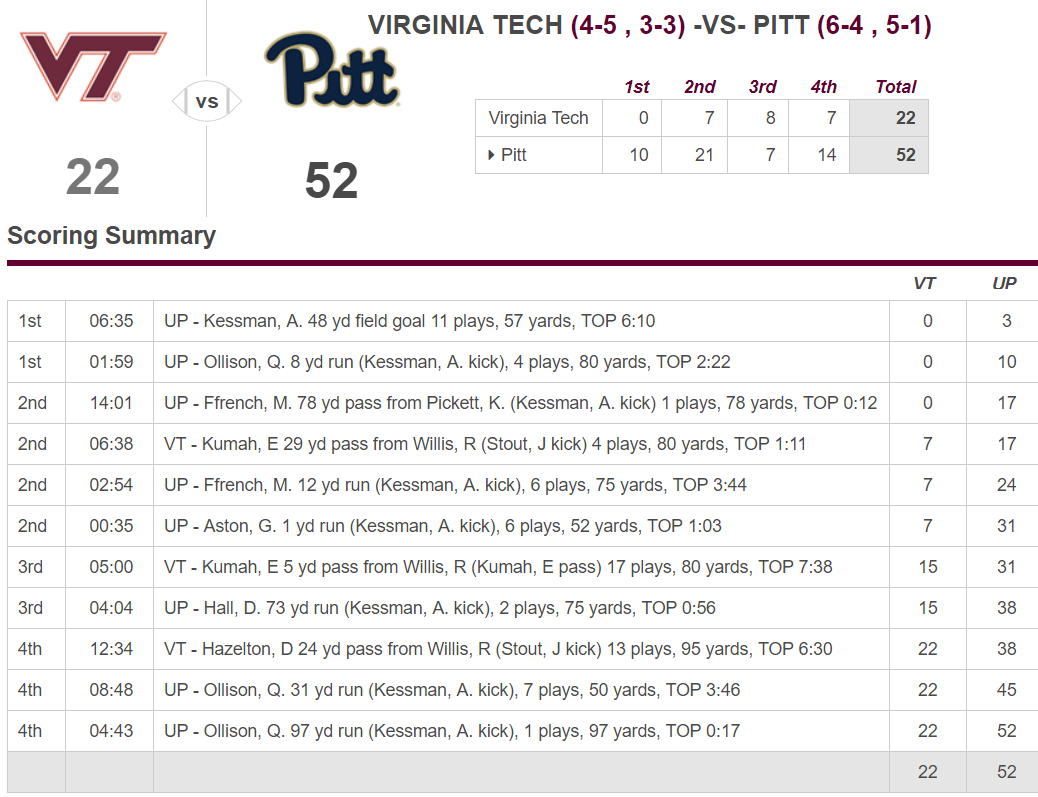 It’s been tough sledding for Virginia Tech football in 2018. That trend continued Saturday when Pittsburgh shellacked the Hokies 52-22 at Heinz Field. With the loss, Virginia Tech drops to 4-5 (3-3 ACC), and Pittsburgh goes to 6-5 (5-1).

Pittsburgh jumped out to a 17-0 second quarter lead, led 31-7 at the half, and cruised to the win. 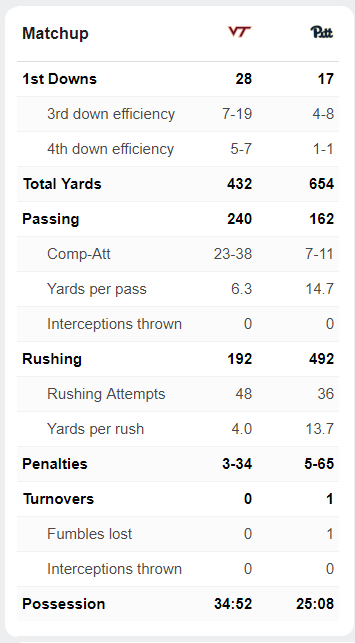 “We’re trying to teach our guys through this,” head coach Justin Fuente said. “It doesn’t mean that we’re not being demanding of them. We absolutely are, but come game time, it’s time to solve problems and fix things and continue to bring those guys through.”

The Panthers gashed the Hokies for 654 total yards and 492 yards rushing. That’s the most yards that Pitt has ever garnered since the program began playing in 1890. It’s also the most yards that a Bud Foster-coached Virginia Tech defense has allowed, and the second most of all-time. The Hokies have now allowed 45 points or more four times this year. That last happened in 1950.

On Pitt’s senior day, senior running back Qadree Ollison galloped through the Hokies defense to the tune of 235 yards on 16 carries and three touchdowns. Darrin Hall, another senior, wasn’t far behind, picking up 186 yards on seven rushes and one touchdown. Ollison and Hall combined for 18.3 yards per carry. The duo also ripped off four runs of 50+ yards.

“The level of inconsistency on both sides of the ball is what we’re trying to work through,” Fuente said. “You see a play, and you think, ‘Man, that looks great. We defended that really well.’ Then you see a play, and it’s a big chunk play.”

Perhaps no play better encapsulated the night for Virginia Tech’s defense than when Ollison found an open lane, stiff-armed Caleb Farley to the ground, and flipped his way into the end zone for a 97-yard touchdown one play after the Tech offense failed to convert on a fourth-and-goal. That was Pittsburgh’s final score in the rout.

It was the icing on the cake for the Panthers, who now just have to defeat either Wake Forest or Miami in their final two games to clinch the ACC Coastal. Meanwhile, Virginia Tech is officially eliminated from ACC Coastal consideration.

The Hokies were forced to use a depleted lineup on defense the entire game. Defensive end Emmanuel Belmar did not dress, defensive tackle Jarrod Hewitt did not play, and defensive end Houshun Gaines exited the game in the first half and did not return. Linebackers Rayshard Ashby and Dylan Rivers didn’t start for the second straight week, though Ashby did enter the game later. Cornerback Bryce Watts was out with a fractured forearm.

“We are in a situation where some guys are forced into action before they’re properly seasoned, I guess, and continuing to coach and push them to continue to get better will be our focus,” Fuente said. “I’m sure they don’t like not playing well. Nobody does, but they’ve got to understand that you can’t use that as a crutch or an excuse. We’ve got to continue to help those guys and put them in as good of a situation as we can put them in.”

While the defense had its issues, Virginia Tech’s offense did not fare much better. The Hokies were able to garner a respectable 432 yards of offense, but still only put up 22 points against a Pitt defense that has previously allowed point totals of 51, 45 (twice), 38, and 37.

Whether execution or play-calling, Virginia Tech would be hard-pressed to win any games this year putting up just 22 points.

Ryan Willis finished 22-of-34 for 231 yards and three touchdowns. He was also the Hokies’ leading rushing with 65 yards on 16 carries. Eric Kumah corralled two touchdown catches, and Damon Hazelton also added one, his eighth in nine games.

Quincy Patterson played in his third game for Virginia Tech. The freshman can only play in one more game to retain his redshirt status. The Hokies inserted Patterson in the middle of several drives, but Pitt’s defense knew to expect the ground-heavy looks in those situations. He carried the ball five times for just four yards and was 1-of-4 passing for nine yards on mainly screen passes.

Virginia Tech closes the season with two games at home against Miami and Virginia. The 25-year bowl streak is in serious jeopardy as the Hokies will need to win both of those games. Virginia Tech has not beaten an FBS opponent at Lane Stadium this year.

The Hokies still have the option of scheduling a 12th game on December 1 now that a date with Clemson (or Boston College) in the ACC Championship is out of the question. Virginia Tech might need that game in order to extend the bowl streak. 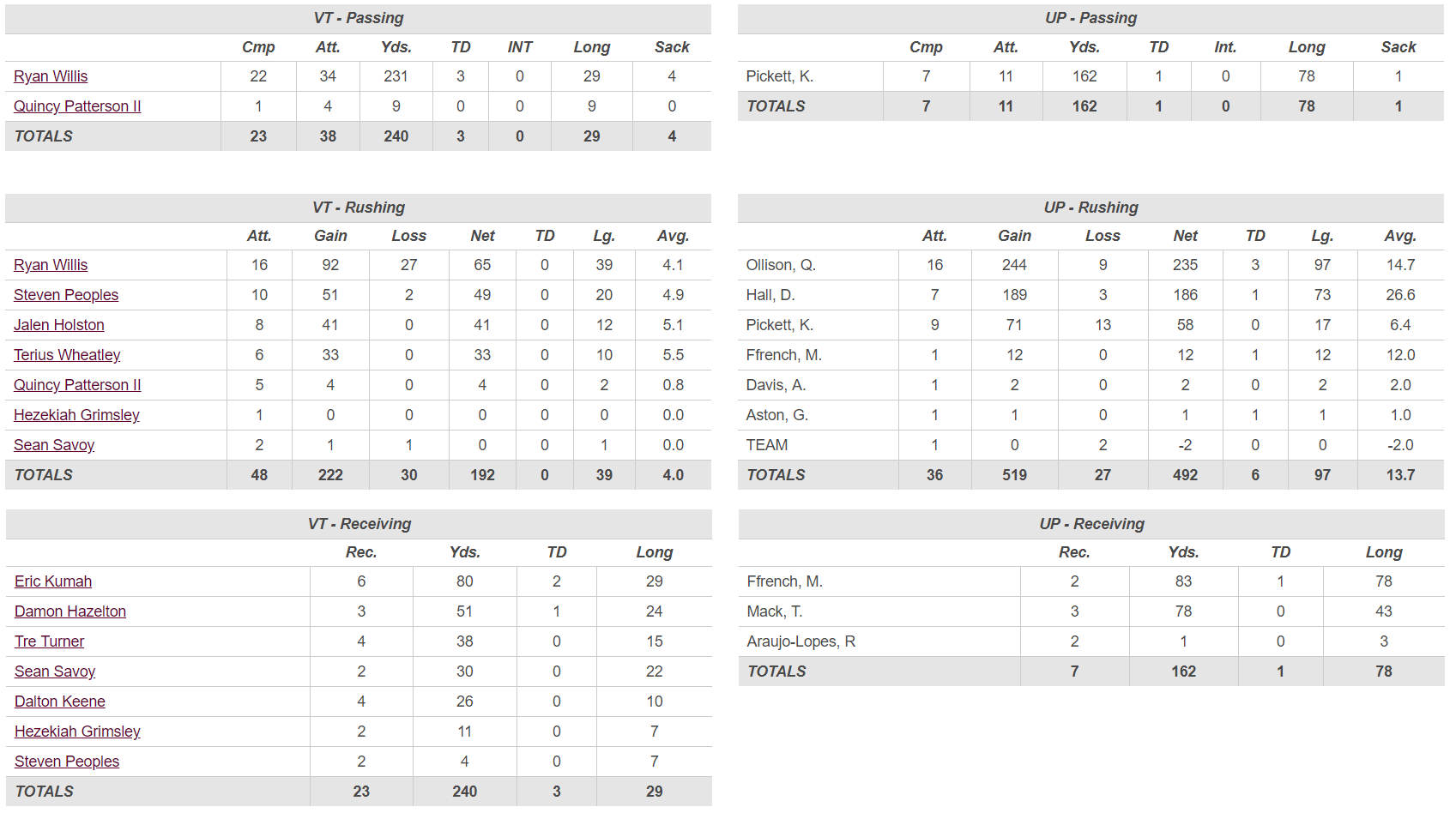