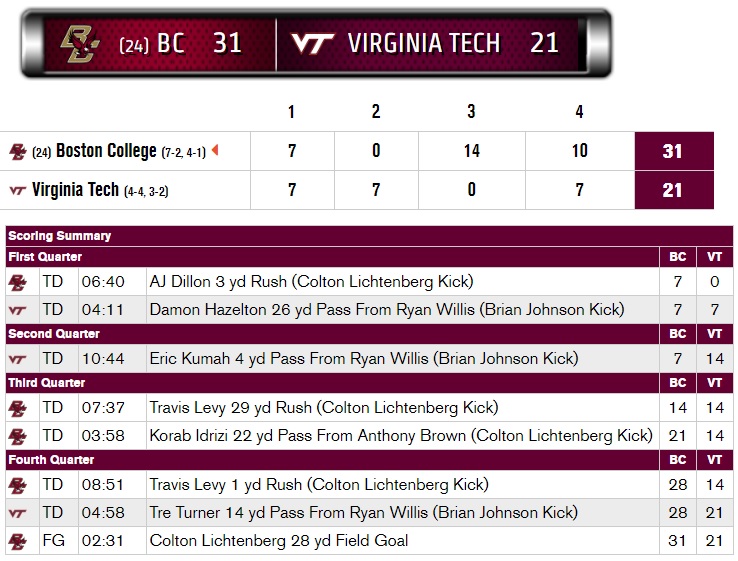 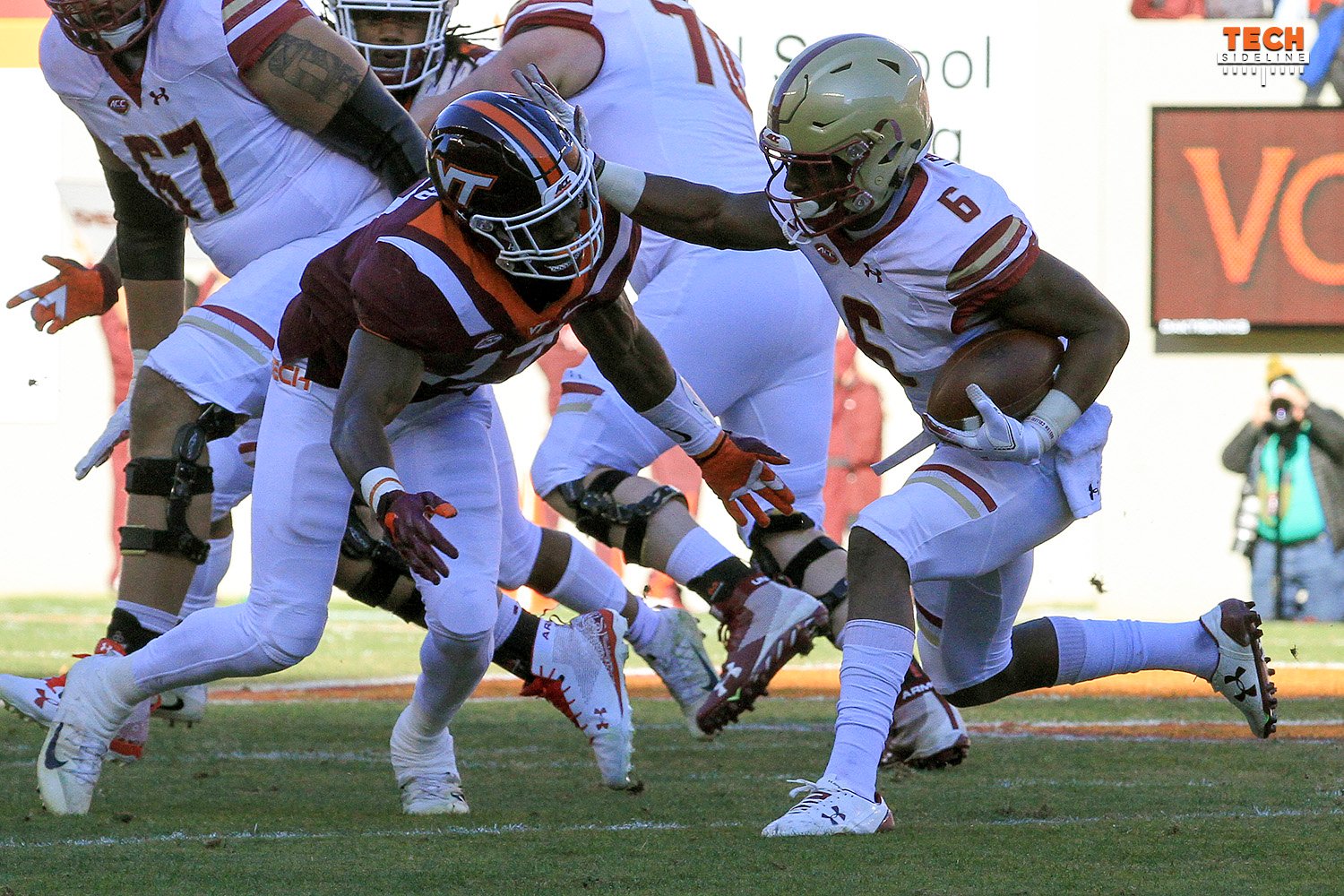 Blacksburg, VA — Another sputtering offensive performance in the second half. Another loss in front of the home fans at Lane Stadium. Another game chock-full of missed opportunities. Virginia Tech (4-4, 3-2 ACC) fell apart after halftime and lost 31-21 to No. 22 Boston College (7-2, 4-1 ACC).

Virginia Tech has now scored 30 points or more just twice in its past 13 ACC games. 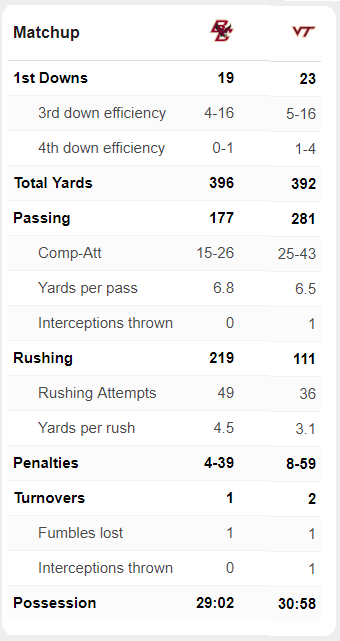 “The guy calling the plays [offensive coordinator Brad Cornelsen] is the same guy that in his very first year here set 10 school records. He still knows what he’s doing. The people out there have changed, and we have to do a better job.”

The Hokies led 14-7 heading into the locker room at halftime. Ryan Willis had just three incompletions, 212 passing yards, and two touchdowns. Still, there were a couple of blown chances at the end of the half.

Willis was successful on a fourth down conversion at Boston College’s 26-yard line on a QB sneak, but a Chris Cunningham personal foul moved the offense back. Three plays later the offense faced a fourth-and-inches again, but Lecitus Smith was flagged for a false start. The offense went for it on fourth-and-5, but did not convert with 2:08 in the first half.

A high snap by Zachariah Hoyt to backup quarterback Hendon Hooker from midfield and the subsequent fumble recovery by the Eagles also ended Virginia Tech’s next drive, and their final chance at a score before the end of the half.  Hooker was in the game because Willis was injured briefly, and had to leave the field for one play.

“There’s a couple opportunities that got away from us, absolutely,” Fuente said. “I still felt good that we were going to have more opportunities, but we know versus a good defense like that they may be limited.”

In the third quarter, it all came crashing down.

Virginia Tech’s five drives in the third quarter garnered 32 yards, three three-and-outs, and a costly interception inside their own 20-yard line. That interception led to a 22-yard touchdown from Boston College’s Anthony Brown to tight end Korab Idrizi to give the Eagles the 21-14 advantage. Brown finished 15-of-26 for 177 yards and a touchdown.

It was the second straight week that Virginia Tech’s offense had “the valve shut off” as Fuente put it against Georgia Tech. Last Thursday versus the Yellow Jackets, the Hokies scored three touchdowns on the first three possessions, then didn’t score again until garbage time in the fourth quarter.

“We’ve gone through some dry spells,” Fuente said. “Boston College made a decision maybe halfway through the second quarter and into the second half to stop blitzing, stop moving and play base defense. We came out in the second half and tried to run the ball and couldn’t.”

Fuente is now 20-1 when leading at the half at Virginia Tech, losing for the first time on Saturday.

Faced with a fourth-and-2 from Virginia Tech’s own 49-yard line, Fuente took the gamble and Willis’ pass fell incomplete to the turf early in the fourth quarter. Boston College took over and marched down the field and scored on Travis Levy’s 1-yard plunge, taking a two-touchdown advantage with 8:51 left.

“It’s like sugar and chocolate. Too much of one thing is bad for you,” Fuente said. “You have to have balance. In this game if you can only do one thing, they won’t let you do that for very long.”

The Hokies then drove down the field, and Willis connected with Tre Turner on a 14-yard touchdown in the corner of the endzone with 4:58 remaining in the fourth. Willis finished 25-of-42 for 281 yards and three touchdowns. He also found Damon Hazelton and Eric Kumah for touchdowns in the first half.

Needing a defensive stop down 28-21, Boston College engineered a scoring drive, converting on a 28-yard field goal, and iced the game with 2:31 in the fourth.

The defense was depleted from the start with Jarrod Hewitt, Dylan Rivers, Rayshard Ashby, and Khalil Ladler all out to start the game. Bryce Watts also fractured his arm in the first quarter. In particular, Rico Kearney and Dax Hollifield made their presence known starting for the first time in their respective linebacker spots. Kearney tallied a game-high 18 tackles, and Hollifield collected 10 tackles.

“I saw some of the stats, and he [Kearney] was all over the place,” defensive coordinator Bud Foster said. “That does not surprise me. Rico is a guy that has a lot of abilities. He had a great week of practice. It’s really important to him.

“Dax has so much energy. He’s one of those guys who is going to make people around him better. He’s got so much energy, people might initially look at him and think he’s phony because he is such an all-in guy. It’s real and I love it.”

Virginia Tech has now lost three straight games in Lane Stadium for the first time in the same season since 1992. With the Hokies only win at home against FCS William & Mary, it’s been 351 days since Virginia Tech has beaten an FBS team from Lane.

The Hokies will have to win two of its final three games (or schedule a final game) to keep the bowl streak alive.

“To be honest, I haven’t thought about the bowl streak too much,” tight end Dalton Keene said. “We’re moving on to Pitt now. I leave that to the coaches to worry about.”

Some of the older guys on the team have been through the pressure before to win games down the stretch in order to extend the streak, most notably in Beamer’s final year in 2015 when the Hokies won three of their final four games to finish the regular season 6-6.

“I know one thing I learned [during the 2015 season] was to beat UVA,” Defensive tackle Ricky Walker said. “We didn’t really talk about the bowl streak, but it just ended up happening.” 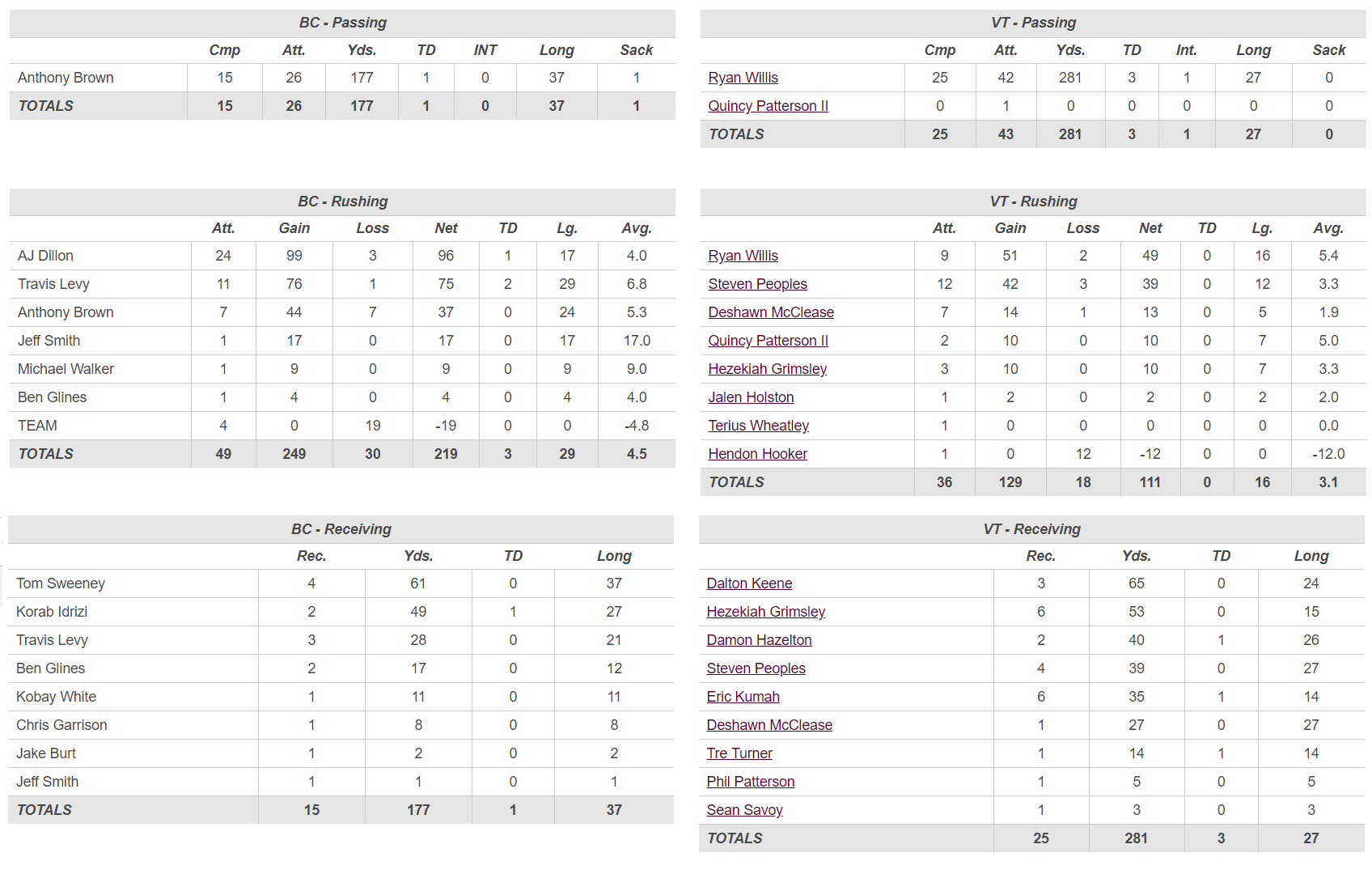