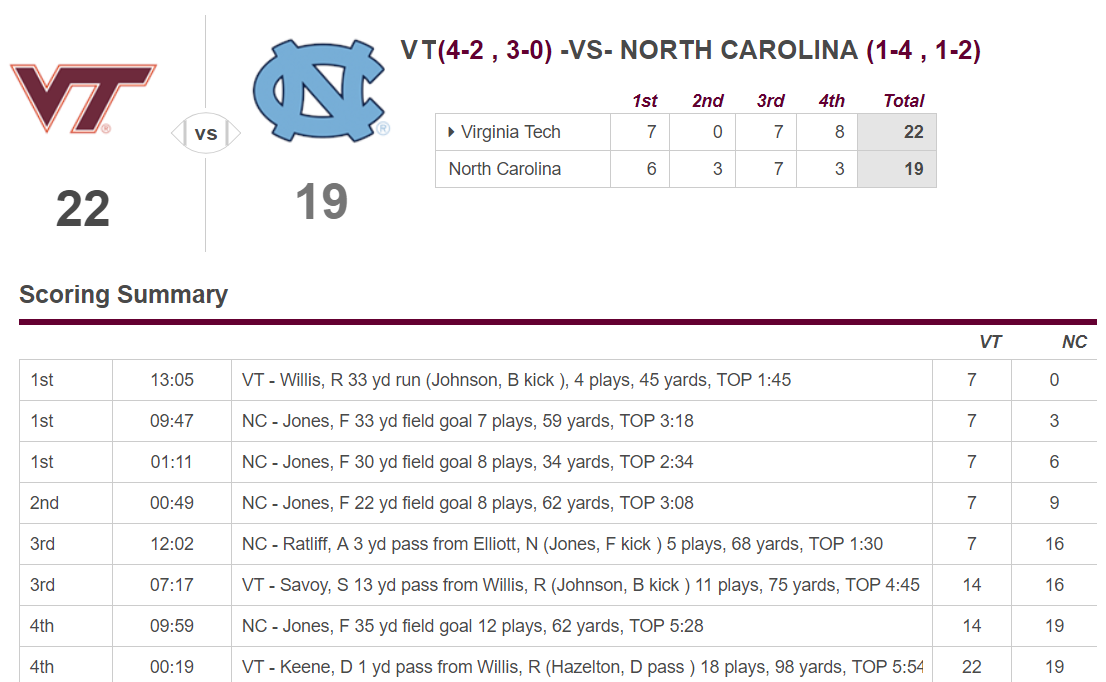 Defensive coordinator Bud Foster sat down at the table for the postgame press conference and let out an amused chuckle. His defense had just given up 522 yards, but a win is a win, and Virginia Tech (4-2, 3-0 ACC) survived and outlasted North Carolina (1-4, 1-2 ACC) 22-19 at Kenan Memorial Stadium. The Hokies drove 98 yards in 18 plays for the game-winning touchdown with 19 seconds left for the win.

“You know what, I don’t even worry about the stats,” Foster said. “The only stat that counts is that one on the left column right there. I know this, our kids played extremely hard for 60 minutes.”

Coming into Saturday night’s game against the Tar Heels, Virginia Tech had dominated teams from the state of North Carolina with a record of 7-0 under head coach Justin Fuente. The Hokies win was anything but dominating.

After struggling most of the night and trailing 19-14, Hokies quarterback Ryan Willis marched the Virginia Tech offense 98 yards on 18 plays, setting up the game-winning 1-yard touchdown pass to a wide-open Dalton Keene on first and goal with 19 seconds remaining. It was Keene’s only catch of the night.

“I really love this game,” Willis said. “I’m going to say it again. Coach Fuente and coach (Cornelsen) have been on me to take some deep breaths in situations like that. Never get too high, never get too low. Somewhere in the middle, the happy medium. I’m just happy we got the win.”

Prior to the drive, the Hokies had just 277 yards of offense. Willis finished 20-of-36 for 221 yards, two touchdowns and two interceptions. The signal caller was also the team’s leading rusher, totaling 88 yards on 15 attempts and a touchdown.

“I think it’s just a great example of sticking with it,” Fuente said. “Our kids, I think they were disappointed that they weren’t playing any better, but they weren’t frustrated. To me, there’s a big difference. They just kept plugging away.

“One of the best things about being a head coach is watching your team celebrate. These kids sacrifice a lot. We see these kids behind closed doors working their tails off. To see them cut loose and celebrate together whether it’s with the fans or in the locker room afterwards, you take that moment selfishly.”

Willis and Co. converted four third downs and one fourth down on the game-winning drive. On a fourth-and-9 from North Carolina’s 40-yard line, Willis kept it himself, picking up 12 yards for the first down. 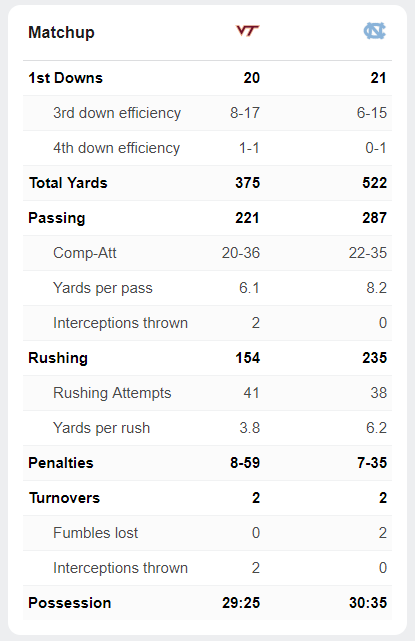 “That fourth-down play was huge,” Defensive tackle Ricky Walker said. “Ryan has got a little gas on him, a little wheels on him. He made a great play.”

Virginia Tech’s game-winning heroics would not exist without the key defensive stop that the Hokies made on the Tar Heels’ previous possession. After being backed up in at its own 2-yard line, North Carolina’s quarterback Nathan Elliott, who replaced true freshman starter Cade Fortin, completed an 80-yard pass on third-and-15 to Carl Tucker. Reggie Floyd and Jovonn Quillen gave pursuit, causing Tucker to cut inside and eventually be brought down by Quillen at the Tech 13 yard line.

“It’s just our kids chasing the ball and you never know,” Foster said. “It’s been proven over, over, and over again that if you give great effort, you can make a touchdown-saving tackle. That can be the difference in the football game and it was, when it’s all said and done. That’s as critical as a play, just like (Floyd’s) play last year against Pitt. Just guys giving themselves to their teammate, and they did that tonight.”

Looking to take a two possession lead, the Tar Heels later had a first-and-goal at Virginia Tech’s 1. Michael Carter, who finished with 18 carries for 165 yards, was mere inches from inflicting the knockout punch against the Hokies with 6:13 left in the game. Instead, backup safety Tyree Rodgers delivered the blow, putting his helmet right on the football and popping it up in the air for a forced fumble. Quillen recovered at the 2-yard line, setting the scene for the offense to go win the game.

“We called an all-out blitz and Tyree had the tight end,” Foster said. “He did a great job of fitting. I’m anxious to see the film. I’m sure he put his hat right on football. I was just glad he didn’t cross the plane when it’s all said and done.”

“I saw a big wad of people, a big collision, and what I thought was a helmet go up in the air,” Fuente said. “Then I realized pretty quickly it was the ball.”

North Carolina controlled the game for the majority of the night. The Tar Heels ended up outgaining Virginia Tech in total yardage 522-375. Despite allowing five plays of 40+ yards, the Hokies defense stood strong when needed and forced six North Carolina field goal attempts. The Tar Heels lived on the Hokies’ side of the field at times, but only found pay dirt once.

“Every week is going to be a four hour stomach ache,” Fuente said. “That’s where we’re at.

“I thought just in general terms, our red zone defense is what gave us a chance. However many times it was that they were down there, and we held them to field goal opportunities.”

Virginia Tech improves to 3-0 in the ACC, with all three wins coming on the road. After Miami fell to Virginia 16-13 on Saturday night, the Hokies are in the driver’s seat, holding sole possession of first place in the Coastal Division.