Justin Fuente versus Larry Fedora matchups have been decidedly one-sided since Fuente was hired from Memphis before the 2016 season.

The Tar Heels will be looking to reverse that trend, and they’ve had an extra week to prepare for the Hokies. Will that be enough to get Fedora his first victory over Fuente? Let’s take a closer look at UNC.

Larry Fedora had the choice of starting either Nathan Elliott (6-1, 215, r-Jr.) Chazz Surratt (6-3, 215, r-So.) against Virginia Tech, but the news broke Wednesday that Surratt is out for the season with a wrist injury.

That news was first reported by Tar Heel Illustrated, which followed up with an article that freshman QB Cade Fortin will play Saturday and may even start.

Both Elliott and Fortin have played this year, though Elliott has played a lot more and has started every game.  Here are their numbers…

Not only is Fortin a freshman, but he’s a true freshman.  He did enroll in January, and he had a solid offer list that included Texas A&M, Cal, Iowa, Iowa State, Kansas State, Kentucky, Louisville, Oklahoma State, Ole Miss, Vanderbilt and West Virginia.

Elliott is an experienced player who has struggled his entire career.  As a redshirt junior, he’s completed just 55.6% of his passes over his career, he has just 13 touchdown passes to nine interceptions, and he averages only 6.2 yards per attempt.  Those 6.2 yards per attempt does not rank among the top 100 quarterbacks in college football.  In fact, the bottom players on the top 100 list average 6.5 yards per attempt, which is well ahead of Elliott.

At this point, Elliott is who he is.  He isn’t going to get any better.  He isn’t going to magically develop a better arm and start completing passes down the field.  If I’m Fedora, I’m going with Fortin, and I’d lean on the running game to help him.  It can’t possibly make the quarterback situation any worse than it already is.  However, I’m not sure that “leaning on the running game” is something that is in Fedora’s mental makeup.  He’s always been a pass happy coach no matter who he has at tailback.

The Tar Heels have gotten good tailback production this year….

Fedora needs to lean on those guys more, but I just don’t know that he has it in him.  In UNC’s close 24-17 loss to Cal, Tar Heel tailbacks combined for just 25 carries, while Nathan Elliott threw 35 times and ran it another 10 times (0 sacks0.

It will be interesting to see what Fedora does, especially since he’s had an extra week to prepare.

From a yardage standpoint, only the ECU game stands out as a terrible game (the 402 yards gained by Pitt would rank No. 75 in the country in total offense). Last season, the UNC defense allowed 436.1 yards per game. This season that number stands at 386.25. That ranks No. 71 nationally, whereas Virginia Tech’s defense allows 398 yards per game, ranking No. 80 nationally. From the standpoint of traditional stats, the Tar Heels will field the better defense on Saturday.

The advanced stats tell us that North Carolina’s issues have come defending the run.

The Tar Heels have done okay against the pass, but they haven’t been able to stop the running game. Here are their rushing yards allowed by game…

The Hokies should be able to get something going on the ground against the Tar Heels. Starting defensive end Malik Carney (6-3, 250, r-Sr.) will miss this weekend because of suspension. He has 5.5 tackles for loss and 3.5 sacks in the two games he’s played this season, so he could be a significant loss.

Overall, UNC’s defense has improved, but they are still a mediocre group.

North Carolina has not one, but two true freshmen at the top of their depth chart at the nickel spot.

Thus far, Morrison has gotten the majority of the reps. He has 12 tackles on the season to Richardson’s one. Whichever nickel is in the game will be a very young, very inexperienced player. He’ll have both run and pass responsibilities.

I would expect Virginia Tech offensive coordinator Brad Cornelsen and head coach Justin Fuente to try to find a way to exploit this inexperienced position.

Anthony Ratliff-Williams (6-1, 205, r-Jr.) originally went to North Carolina as a quarterback, but he’s developed into one of the most well-rounded players in the league. He was a First Team All-ACC specialist a year ago, and he can change the game on offense or special teams. He can also do it with his feet or his arm.

Here are his numbers from last season…

Overall, Ratliff-Williams was responsible for 10 North Carolina touchdowns a year ago, and he did them in three different ways.

The best defense against his kickoff return abilities is to continue to kick the ball through the endzone. 31 of Jordan Stout’s 33 kickoffs has gone for touchbacks. That percentage of 93.94% ranks No. 1 in the country. If Stout continues to do that, then the Hokies will negate a big portion of Ratliff-Williams’s game.

However, the Hokies will still have to defend him as a wide receiver. They especially need to be on their guard for the wide receiver pass. Ratliff-Williams has yet to throw a pass this season, but with extra time to prepare for this game, it’s very possible that the UNC coaches could include such a play in the playbook for Saturday night’s game.

Hokies Must Avoid the Big Play

Speaking of playmakers, Virginia Tech’s defense has been burned by the big play repeatedly this season. Three of Notre Dame’s 67 plays netted 168 yards last week (all went for touchdowns). The other 64 plays gained just 270 yards, which comes out to just 4.22 yards per play. 4.22 yards per play would rank as the sixth best mark in the country, if you extrapolate it out to the entire season. That’s how good Virginia Tech’s defense was for 64 of the 67 plays they were on the field against the Irish.

However, if you can’t prevent three big plays, it makes those other 64 plays a lot less important. Here are some advanced stats that show exactly how bad the Hokies have been in preventing the big play this season. First, let’s look at the overall defense…

The first two measure the overall picture, and the Hokies have been solid. IsoPPP and Marginal Explosiveness measure big plays, however, and Tech has been awful there.

The difference in overall efficiency rate and big play rate is vastly different in the running game. Here are Tech’s defensive numbers against the run thus far…

The Hokies are one of the nation’s best teams against the run, and they would be even better if they could prevent big plays such as the 85 yard run by Cam Akers, or the 97 yard run by Dexter Williams.

Things aren’t as vastly different in the passing game…

Again, the Hokies are bad about giving up the big play. However, they aren’t so good when it comes to defending the short-to-intermediate routes, either.

How do the Tar Heels rank in big plays? They are No. 29 in rushing marginal explosiveness, and No. 107 in passing margin explosiveness. They’ve been able to hit big plays on the ground, but they have been stagnant through the air. The Hokies need to keep their gap integrity against the run, and they need to tackle cleanly. If they can prevent big plays by the UNC running game, it will be difficult for the Tar Heels to move the ball consistently.

North Carolina’s special teams have been good this year, as the numbers show.

That kickoff return efficiency number can probably be ignored, as we know that Anthony Ratliff-Williams is capable of breaking a big one at any point. Still, it’s likely that he’ll be cancelled out by Jordan Stout and Virginia Tech’s own lofty special teams rankings.

On the whole, this looks like a pretty even matchup, with perhaps a slight advantage for the Hokies.

There’s no such thing as a “must-win” game in mid-October, but the Hokies need to win this one to go to 3-0 in the ACC, with all three wins coming on the road. That would put them at 4-2 overall, and 3-0 in the conference, with Georgia Tech coming to town.

That Georgia Tech game is why I say the Hokies need to win this one. I cringe while thinking about some of those young Virginia Tech defenders trying to defend Paul Johnson’s spread option for the first time. The Yellow Jackets aren’t what they used to be, but that system is still very difficult. Virginia Tech can still win the Coastal Division if they lose to Georgia Tech, but they can’t win it if they lose to both Georgia Tech and UNC.

The big play ability of Anthony Ratliff-Williams concerns me, particularly since he’ll be facing an inexperienced Virginia Tech secondary. The health of Divine Deablo also concerns me. Is he playing or not? I wish I knew. But in the end, the Hokies have the better quarterback, and they are also better up front on both sides of the ball. The Tar Heels will probably play better than we’ve become accustomed to over the last two years, but based on all the evidence that we have, it wouldn’t make any sense to pick them to win this game.

The fact that Cade Fortin may start adds a bit of unknown to this game.  I’m getting a little bit tired of opposing teams changing quarterbacks at the last minute.  Personally, I’d prefer to face Elliott.  I know his strengths (there aren’t many) and his weaknesses (there are a lot).  Fortin is a big unknown.  That said, I’m not going to let a true freshman worry me too much.

Will Stewart’s Take: When you have a young team like the Hokies, anything is possible on game day, meaning that a North Carolina squad that is 1-3 (and would likely be 1-4 if their game with UCF hadn’t been canceled due to Hurricane Florence) could beat Virginia Tech.

You also know that Virginia Tech has been all over the map, making this game hard to predict. If UNC is truly going to play (and possibly start) a freshman QB the Hokies have never seen before, that adds another layer of uncertainty.

Kenan Stadium does not, of course, present any sort of feared venue for the Hokies, who are 6-1 there since joining the ACC. (Carolina won 48-34 in 2012, the only blemish.) The Hokies have historically felt pretty comfortable there.

On our podcast Wednesday, I picked Virginia Tech to win by a large margin, something like 42-20. Today, I’m not so sure. I still think Virginia Tech will win, but today I think it’s going to be a close, hard-fought battle. Or perhaps the best way to phrase it is that I fear it’s going to be close, hard-fought battle, because that means it could come down to just a couple plays that go the wrong way.

There’s a lot on the line here, but I think the Hokies will come through in the end, and I’m going with a lower-scoring game than I predicted on the podcast. My pick is based on Divine Deablo not playing. If he plays and is effective, things get much more comfortable for Virginia Tech.

Editor’s Note: If you’re looking for concessions during the game, try the booths just under Section 101 and next to Gate 1.  Buying concessions at these booths will benefit the Orange High School band programs.  They’ll have normal concessions there such as drinks, sandwiches (Chik-Fil-A/Bojangles), pizza, popcorn, peanuts, candy, soft pretzels, hot dogs, etc.   The locations are marked by the two circles in the lower right hand corner of the picture below. 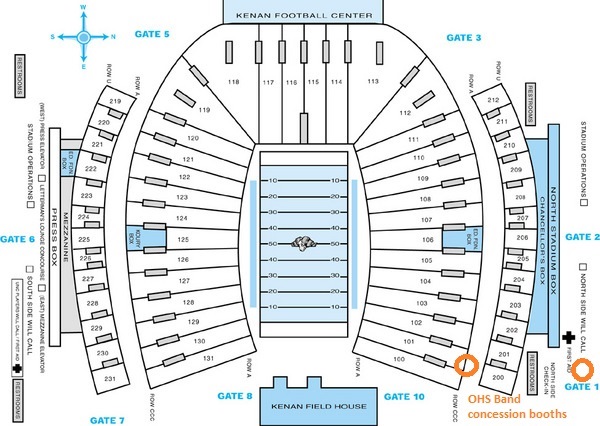