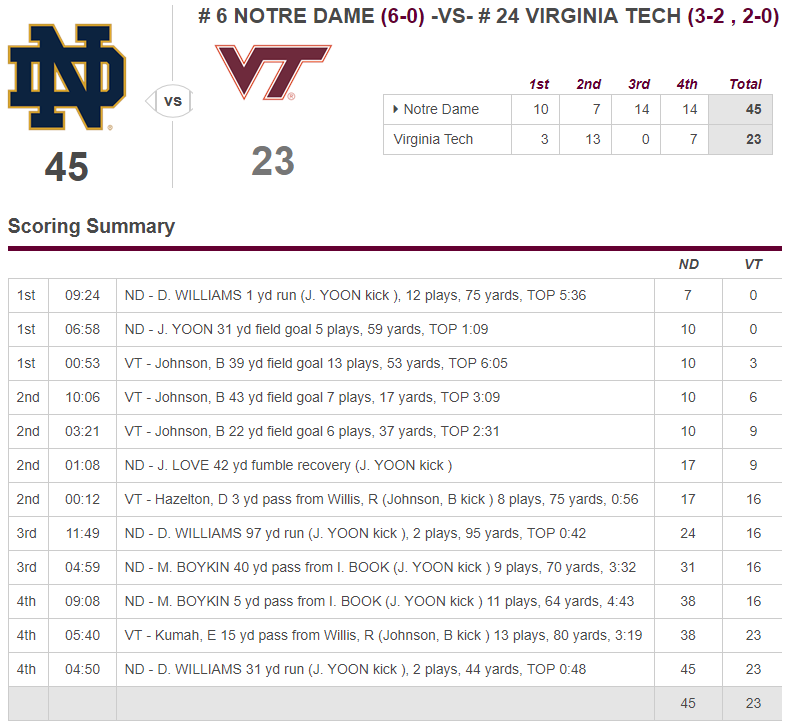 Blacksburg, VA — All it takes are a few plays to change the complexion of a football game. When No. 6 Notre Dame (6-0) entered a frenzied sea of maroon and orange at Lane Stadium for the first time in the history of the program, it was looking to undo the ugly 1-9 record in true road games the past six years against ranked opponents. The Fighting Irish did exactly that, defeating Virginia Tech (3-2, 2-0 ACC) 45-23 in front of 65,632 fans to keep their College Football Playoff chances alive.

The Hokies were looking to snap a streak of their own, but instead extended their losing streak to seven consecutive losses at home against ranked opponents since a 31-7 victory over No. 9 Miami in 2009.

“We played against a really talented, well-coached football team today that’s one of the best teams in America,” Head coach Justin Fuente said. “We certainly had our chances, and we didn’t come through on either side of the ball quite frankly… Notre Dame made more plays than we did and took control of the game late.”

With Virginia Tech trailing Notre Dame 17-16 at the end of the first half, the Hokies came out on their first drive of the second half and stalled out at the Fighting Irish’s 42-yard line. Oscar Bradburn downed a punt at the five, and Virginia Tech appeared to be in a good position. That was until Notre Dame’s Dexter Williams busted a 97-yard touchdown on second down.

A couple missed gap assignments sprung the play and gave Williams the longest rush in Lane Stadium history. Before the play, the Fighting Irish had 13 rushes for negative-three yards. Williams finished the night with 17 carries for 182 yards and three touchdowns.

“They blocked the one play they popped,” said defensive coordinator Bud Foster, whose unit surrendered the most points at Lane Stadium since allowing 49 to Houston in 1974. “It was disappointing. We had a couple guys who were a little late on their reads on the backside. They blocked the play up pretty good and we had a couple guys who jumped outside, which we didn’t like. That play shouldn’t have been a 97-yard play… after that we kind of self-destructed a little bit.”

On the next drive, Notre Dame quarterback Ian Book found a wide-open Miles Boykin, who tallied eight catches for 117 yards and two scores, for a 40-yard touchdown. Notre Dame ripped off the first 21 points in the second half, quieting the crowd and leading to another Hokies’ defeat at the hands of a topnotch opponent on the national stage.

“The way I see it, we have yet to knock off a top five team here in Lane Stadium,” Fuente said. “That’s the truth. I don’t think the narrative that we don’t play well on big stages is true. I was told the West Virginia game was a big game last year until we won. I was told the Florida State game was a big game until we won. The facts are that what we haven’t done are beat one of the cream of the crop, elite teams.”

Virginia Tech never led in the game. Book engineered a 12-play, 75-yard opening drive that was capped off with a two-yard touchdown from Williams. Trailing 10-0, the Hokies thought they hit a big play when Hezekiah Grimsley flew around on a reverse and tossed a potential 49-yard touchdown to Sean Savoy. However, Christian Darrisaw was flagged as an ineligible man down field.

“The unfortunate part was, he’s [Darrisaw] completely away from the play,” Fuente said. “It was almost like we just moseyed down the field. It wasn’t like we were blocking down the field on an RPO that everybody talks about all the time. It was another example of a big play or big opportunity that we missed through a small detail.” 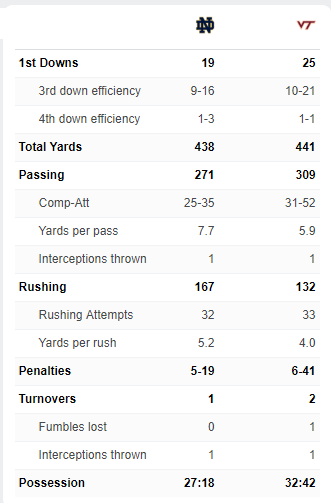 After settling for two field goals, the Hokies found themselves down 10-6 late in the second quarter, and Tech had the ball on the Notre Dame one yard line after a 41-yard run by Steven Peoples. Virginia Tech proceeded to be stuffed, including a botched handoff on third down that ended with Ryan Willis running into his own man. The Hokies made a field goal, but it was another singular play that made the Hokies miss out on four additional points in a crucial point of the game.

“It was actually a pass and we ran into the tailback,” Fuente said. “It’s hard to beat the number whatever they are team in the country when, if you run the ball down to the one yard line… You can’t be just happy with getting it to the one yard line. That doesn’t win games.”

It was Notre Dame’s defense that made the biggest play in the first half. Willis and Co. had another chance to grab a lead, but Willis rolled out to his right and was strip sacked by Khalid Kareem. Julian Love scooped the fumble and rumbled 42 yards for the touchdown to extend the Fighting Irish’s lead to 17-9. Willis ended the game 31-for-52 for 309 yards, two touchdowns, and two turnovers (one fumble, one interception).

“I felt like he’s just doing too much,” Fuente said. “I said, ‘Ryan, you don’t have to put a cape on your back and make six guys miss and throw a post all the way across the field for us to have a chance to win this game.’ I was proud of him how he responded. He showed flashes of playing really, really well. There were a few things that hurt us.”

Wide receiver Damon Hazelton had a big night for the Hokies. The redshirt sophomore racked up 12 catches for 131 yards and a touchdown. It was Hazelton’s fifth straight game with a receiving touchdown, tying Isaiah Ford’s program record.

Virginia Tech returns to action next Saturday on the road at North Carolina. Kickoff is scheduled for 7 p.m. and will be broadcasted on either ESPN2 or ESPNU.