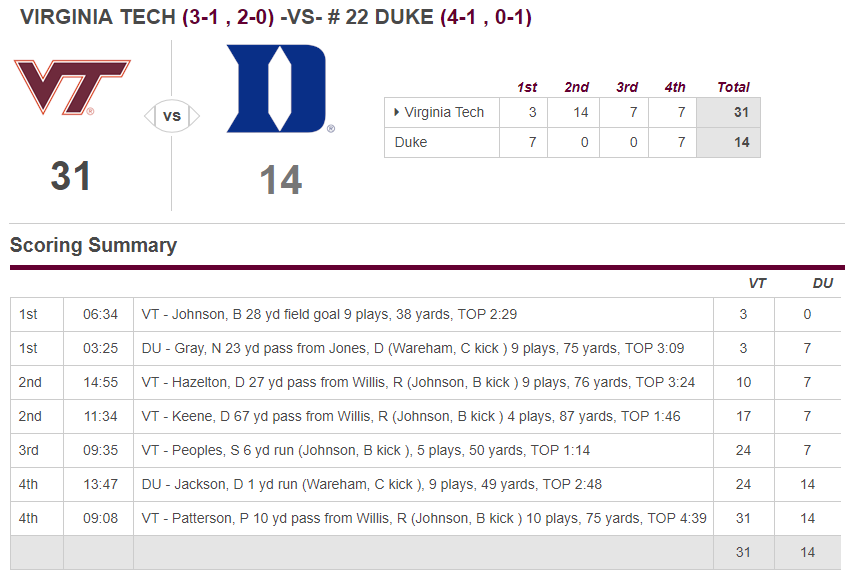 Virginia Tech is now 7-0 at Duke since joining the ACC in 2004, and head coach Justin Fuente is 8-1 following a loss at Virginia Tech.

“I did a poor job last week,” Fuente said. “That’s my fault. We as an organization responded.”

Fuente continued: “When we hit the practice field Tuesday, we hit it running like a hungry football team. It’s really a big challenge for a young football team to try to maintain that level of intensity and attention to detail week in and week out. It’s not a one-for-one trade – you work hard and you win. It doesn’t work like that… They picked themselves off the floor and went out and competed.” 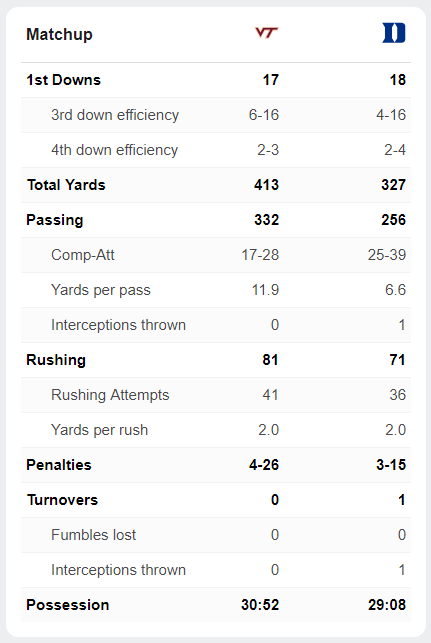 Willis waited nearly two years between his last start behind center and tonight. His patience along the way paid off. In his first career start with the Hokies, the Overland Park, Kansas native exhibited poise in the pocket, completing 17-of-27 passes for 332 yards, three touchdowns, and no turnovers while replacing Josh Jackson. It was Willis’ third career game passing for over 300 yards, last doing it on October 8, 2016 when he tossed for 348 yards against TCU.

“He’s a competitor,” Fuente said. “He was really having fun out there. Certainly wasn’t too big for him. I was pleased with his performance and ability to step up in the moment.

“By and large, he did do a good job of putting the ball where we had a chance to catch it or certainly nothing bad was going to happen. That’s important. That’s something that Ryan is learning because he does have a live arm. He does have the talent and he can make some plays that are pretty special, but balancing that is the quandary for all quarterbacks. He did a good job of that.”

Just a day after his 22nd birthday, the redshirt junior was particularly efficient on third down, going 7-for-9 for 123 yards and picking up six first downs through the air. Willis threw a beautiful fade route time after time, allowing his physical receivers to go up and make a play.

“I’ve gone through a lot in my career, more than people will ever know,” Willis said. “It just feels good being out there on the field again, playing the game I love, having fun. I never really doubted myself.”

Following a stunning 49-35 loss to Old Dominion, the Hokies’ critics came calling for Bud Foster and his defense. Foster’s unit pitched a strong performance, limiting the Blue Devils to 327 yards and allowing just 14 points. Duke quarterback Daniel Jones returned to start, tallying 226 yards passing after missing just 21 days with a broken clavicle that he suffered on September 8 against Northwestern. The Hokies held Duke to just 4-for-16 on third down.

“I thought particularly our back end kids did a great job of contesting every throw and being in position,” Bud Foster said. “As the game went along, they responded. They took what we coached and made some adjustments on the sideline and took it to the field.

The Hokies applied pressure to Jones by rushing just three and dropping eight most of the night. Houshun Gaines collected 2.5 sacks, in the midst of an emotional week dealing with bad news on the health of his mother.

“It’s been tough,” Gaines said. “The main thing is coming out and being around the guys. Being able to play football, it gives you a moment to get away from it.”

On the heels of a Brian Johnson 28-yard field goal that put the Hokies up 3-0, Duke drove down the field and capped it off with a 23-yard pass from Jones to tight end Noah Gray in the far right corner of the end zone.

Immediately after Duke’s score, Willis dropped a dime right over the shoulder into Damon Hazelton’s hands for a 27-yard touchdown. Hazelton has scored a touchdown in four straight games to begin his Virginia Tech career, giving the Hokies a 10-7 lead with 14:55 remaining in the second quarter.

Backed in their own territory, Willis connected with Hezekiah Grimsley for a 24-yard gain on third-and-14. On the very next play, Willis dumped a screen pass to Dalton Keene, who took it the distance for a 67-yard touchdown. The sophomore stiff armed a defender, broke a couple tackles, and was sprung the last 10 yards down the sideline thanks to a punishing block by Eric Kumah. The long touchdown gave Virginia Tech a 17-7 lead with 11:34 left in the second quarter.

Virginia Tech came out and started the second half with a three-and-out, but got the ball back at the 50-yard line with a fourth down stop. Willis lofted a pass that Eric Kumah went up and got for a 36-yard gain to put the ball inside the 10-yard line. Steven Peoples punched it in from six yards out, giving the Hokies a three-score lead, 24-7.

The Blue Devils cut the lead to 24-14 when Deon Jackson jumped over the pile from one yard out for a touchdown. The drive was kept alive when Jones converted a 29-yard pass to Jackson on fourth down to bring the ball to the two yard line.

The Hokies effectively closed the door on any potential comeback when Willis connected with Phil Patterson on a jump ball in the corner of the endzone for the quarterback’s third touchdown of the game. Virginia Tech extended the lead to 31-14 with 9:08 left in the game.

Virginia Tech returns to action next Saturday in a marquee matchup against No. 8 Notre Dame, 38-17 winners over No. 7 Stanford. Kickoff is scheduled for 8:00 p.m. at Lane Stadium. 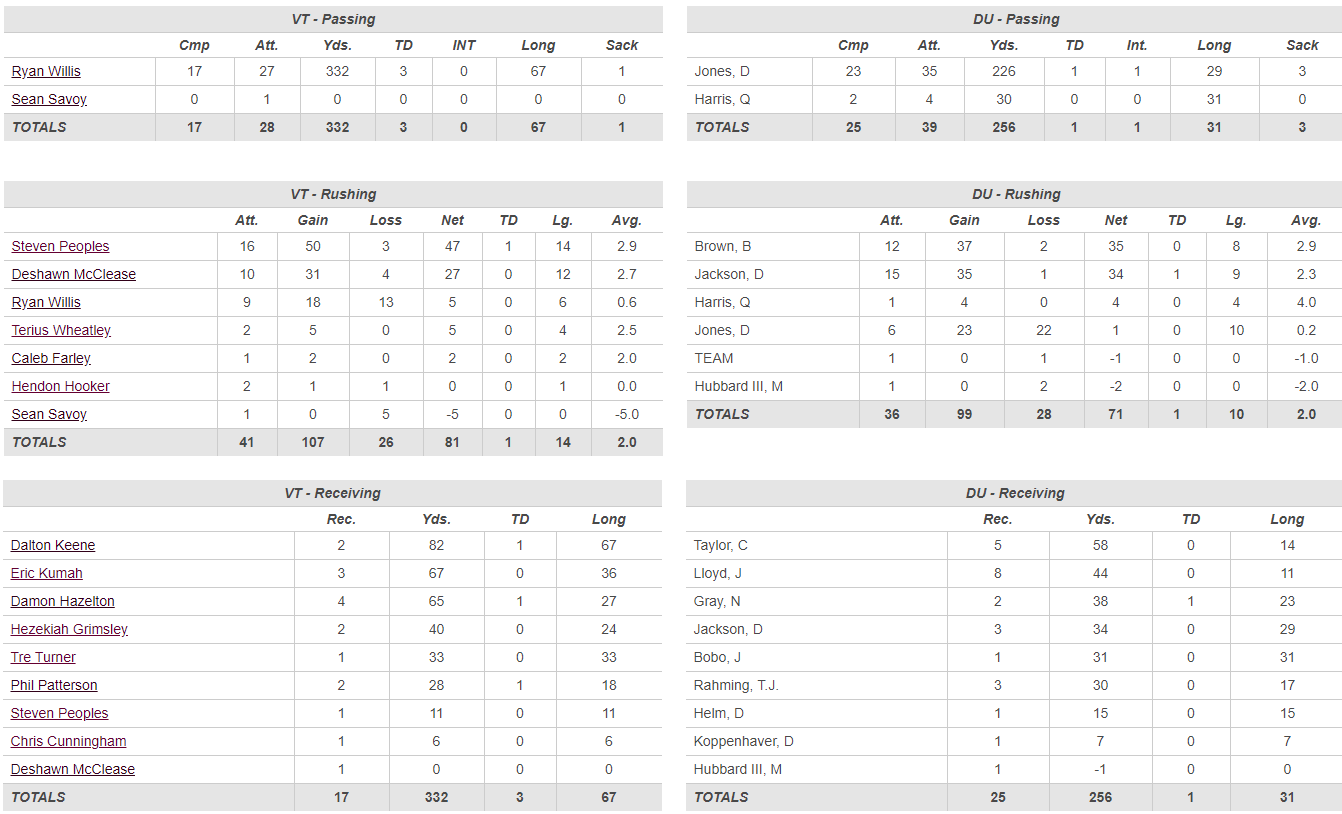