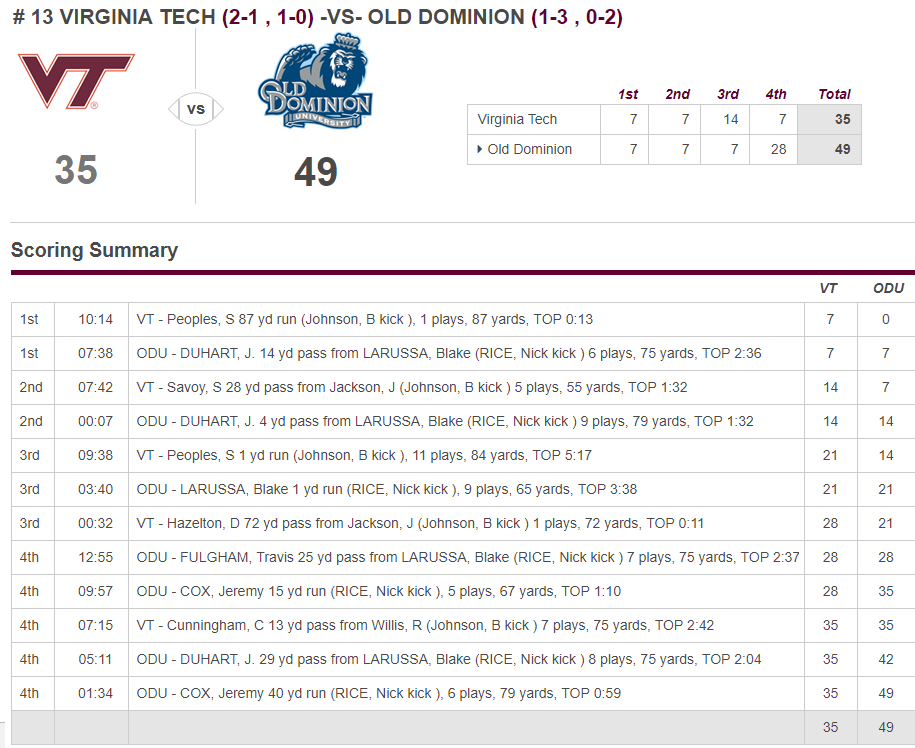 That was the word Virginia Tech coach Justin Fuente used to describe his team’s shocking 49-35 loss to Old Dominion on Saturday. It was a sentiment shared by Hokies defensive coordinator Bud Foster as he considered the 632 yards his typically-stout unit yielded to a 27-point underdog.

“Let me say this: Congratulations to ODU. I thought they were well-prepared, played extremely, extremely well,” Foster said. “I was thoroughly embarrassed and disappointed in our play defensively, and I take full responsibility for it as defensive coordinator. That kind of display of just very inconsistent, poor technique, fundamentals, poor discipline – that’s just not who we are, and we’ll get that right.”

No. 13 Tech (2-1) owned up to its poor play. It couldn’t offer any viable excuse for its inexcusable setback in front of a school record crowd of 20,532 at S.B. Ballard Stadium, which sits in the middle of the most fertile recruiting hotbed of Virginia.

No excuse would be good enough.

“I told them: ‘I liked you guys a lot better when everybody told you that you were terrible and everybody told you you didn’t have a chance to win the first game (at Florida State). All you did was work your tails off. Now we get all feeling good about ourselves and we got brought back down to earth. We got what we deserved.'”

The Hokies have a history of epic upset losses. The fan base will never forget Temple ’98 or JMU ’10. Now it has a new upset to agonize over.

It doesn’t get much worse than allowing 49 points and 632 yards to an ODU team that opened the season with a 52-10 loss to Liberty and followed that up with setbacks to FIU (at home) and Charlotte.

The Monarchs, who picked football back up only 10 years ago, now have a program-defining victory against the best team to ever play on its home field.

“We came out swinging,” ODU senior wide receiver Jonathan Duhart said. “When your back is against the wall, all you can do is fight, and that’s what we did today.”

Tech has no time to sulk after this one. It dives back into its ACC schedule next week on the road against a 4-0 Duke team that has averaged 47.5 points and 513.5 yards in wins against Baylor and North Carolina Central the last two weeks.

And the Hokies might be without starting quarterback Josh Jackson, who went down with an injury early in the fourth quarter. He was carted to the locker room and returned to the sideline on crutches with a boot on his left ankle.

Backup Ryan Willis played in relief, leading the Hokies on a scoring drive to tie the game 35-35 in the fourth quarter, but ODU scored two touchdowns in the final 5:11, including a 40-yard scoring run by Jeremy Cox with 1:34 left.

This loss should make for some interesting tape review. Tech has a lot of areas that need improvement, starting with a secondary that was tested over and over again and never found a way to stop ODU’s passing attack. 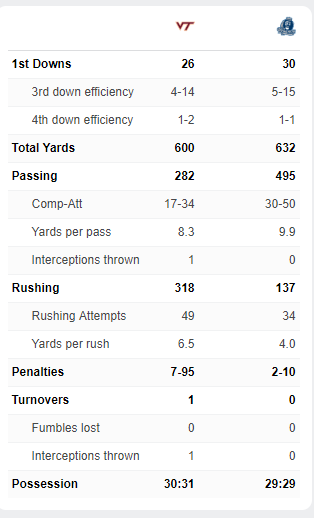 The Monarchs (1-3) did all their damage with a backup quarterback leading the way. Blake LaRussa spelled starter Steven Williams after only one series and proceeded to light up the Hokies defense.

LaRussa completed 30 of 49 passes for 495 yards, four touchdowns and no interceptions. His passing total was the second-highest against a Tech defense since 1987 (Maryland’s Scott Milanovich passed for 498 in a 55-28 Hokie win at Lane Stadium on Sept. 25, 1993).

“We were actually preparing for (Williams), but as you can see (LaRussa) is the better player,” Hokies defensive tackle Ricky Walker said. “He was making plays, extending plays, throwing up for receivers to grab in one-on-ones. (LaRussa) is a great player.”

The Monarchs also rushed for 137 yards and scored three touchdowns on the ground, including two from Cox, who finished with 130 yards on 20 carries.

“I knew they had some dynamic receivers, and they played extremely well. We didn’t play very well at all, as you guys could see,” Foster said. “Very disappointing. Very disappointed in how we competed. I just didn’t think we competed for balls. We played just poor technique. We weren’t ready to play is the bottom line, and I take full responsibility for that. That’s really about it.

“You guys can ask a lot of questions, but that’s really about it. We played very poor. They played outstanding. And we’ll get 11 guys on the field that want to compete and play well, and that’s the bottom line. That’s about it.”

Missed tackles were also a problem for the Hokies, and the assortment of backbreaking penalties that always seemed to come just as Tech figured out a way to get ODU’s offense off the field.

The Hokies were flagged seven times for 95 yards, including three personal foul penalties in the fourth quarter alone. Conversely, ODU committed only two penalties, costing it a paltry 10 yards.

“It’s uncharacteristic. It’s inexcusable,” Fuente said. “What happened was we got in the middle of a real game, a real competitive game and things weren’t going our way and that’s how we responded, and that’s inexcusable. That starts with me. I’m trying to get a better disciplined football team and our response was to go the wrong way instead of buckling down and trying to make a play.

“That was the first time our young football team had really been tested. We thought it was all going to be the first week (at FSU), and it wasn’t. It was this week, and that’s how we responded.”

Tech’s passing offense struggled at times, with dropped passes and errant throws cutting down precious scoring opportunities. Still, Jackson passed for 151 yards and had scoring passes of 28 and 72 yards to Sean Savoy and Hazelton, respectively.

The Hokies ground game kept the ball moving. Tech rushed for 318 yards on 49 carries. Steven Peoples had 156 yards and two touchdowns on 20 attempts. His 87-yard touchdown run in the first quarter was the longest run for the Hokies since Kevin Jones broke off an 87-yarder against Temple in 2001.

Deshawn McClease had 75 yards on 12 carries, and Jackson added 58 yards on 11 attempts. But it was during a run in the fourth quarter that Jackson suffered his injury.

The Hokies suffered a troubling loss to the Monarchs. They’re hoping they didn’t lose their starting quarterback as well.

“I don’t know for sure” about Jackson’s status, Fuente said. “I just don’t know. Obviously he’s in a boot. You guys all saw him on the sidelines. We’ll take a look at it and see.”

“There’s not a bad thing I can say about the kid,” Willis said of Jackson. “He’s a leader. He’s a friend of mine. I told him I loved him. It’s a tough situation, you know. I don’t know what else to say about that.” 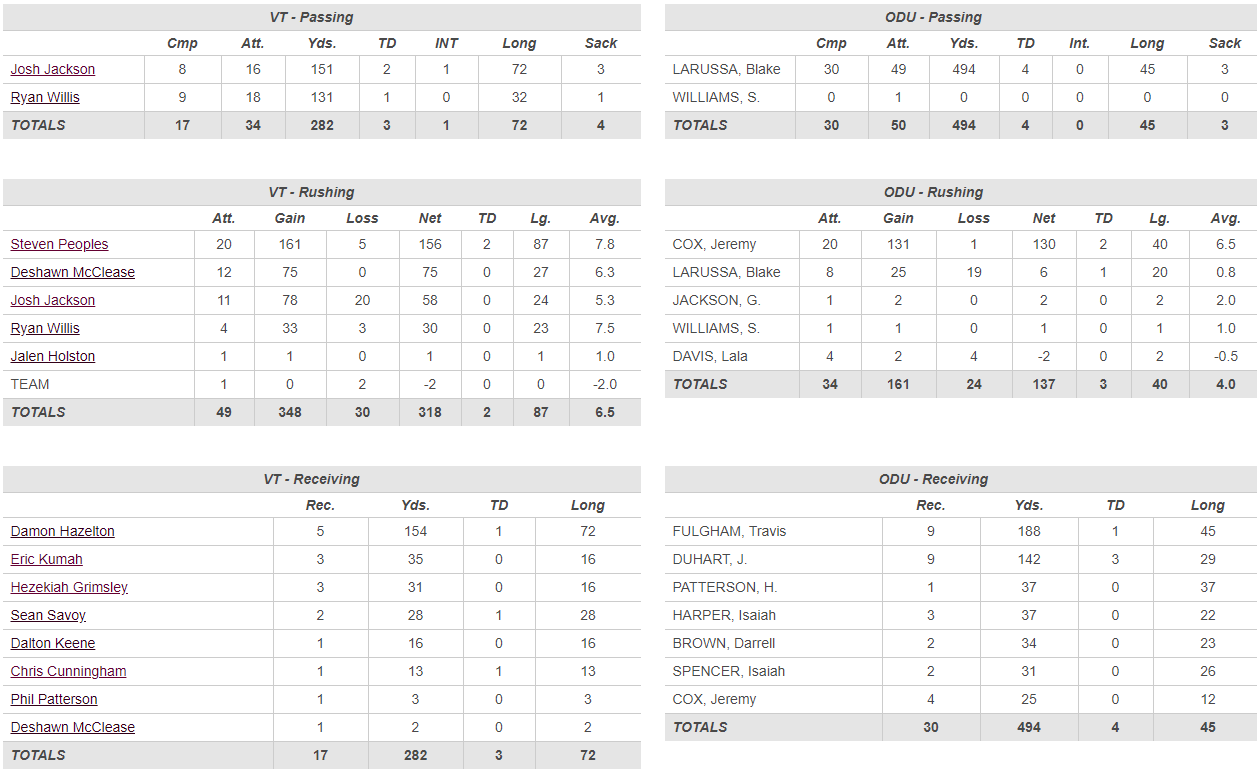