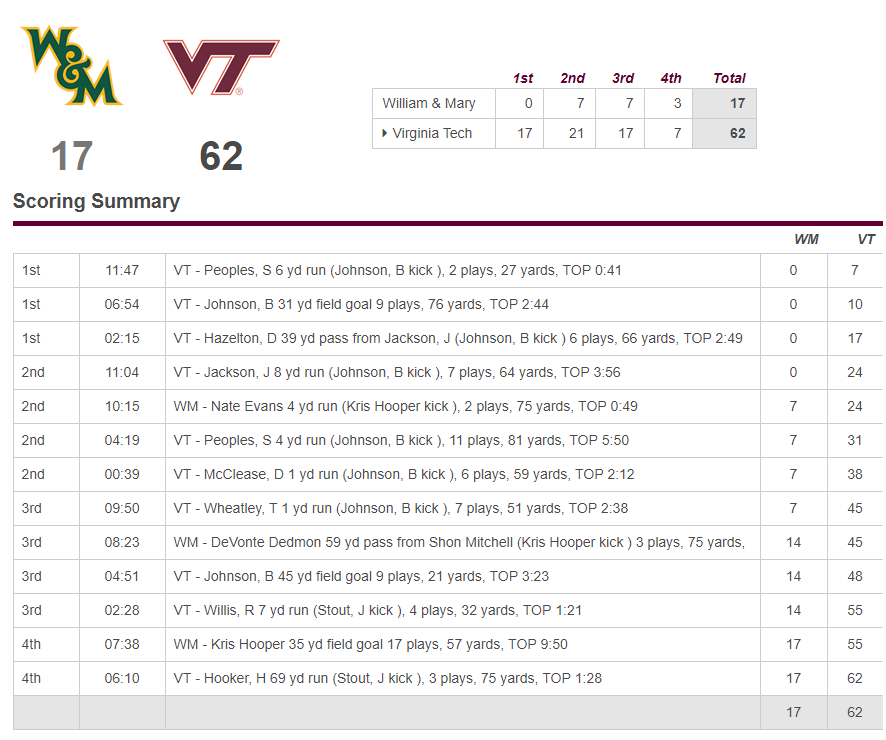 Football is back in Blacksburg and all seems right in the world. In front of a sellout crowd of 65,632 and the threat of a storm, Virginia Tech (2-0, 1-0 Atlantic Coast Conference) easily dismantled William & Mary (1-1) 62-17 in Lane Stadium. The Hokies have now won 12 straight meetings against the Tribe, dating back to 1977.

Following a dominating 24-3 win over Florida State just five days ago, the Virginia Tech faithful were hoping to avoid a letdown. By all accounts, the Hokies took care of business like a No. 12 team should against an FCS opponent.

“Today’s performance in all three phases was not perfect by any means,” Fuente said. “Plenty of things for us to work on that we’ll have to improve, but that’s going to be the mark of our team: can we continue to improve? It was good to get some of our inexperienced guys in the game to play live action football. It’s an attribute to our starters, that they took care of business.”

Virginia Tech outmatched William & Mary on both sides of the ball from the opening kickoff. The Hokies’ 62 points were the second most by a Fuente-coached team at Virginia Tech, only behind the 64-point output last season against East Carolina. The 62 points are also the seventh-most in school history.

After a sloppy start where the Hokies put the ball on the ground with a Deshawn McClease lost fumble on the opening drive, Josh Jackson and Co. responded by scoring on the last 10 possessions, excluding a kneel down on the final drive. Virginia Tech collected 586 total yards and 401 yards in the first half, exceeding the entire game production of 319 yards against Florida State. Oscar Bradburn did not have to punt the whole game for the Hokies. 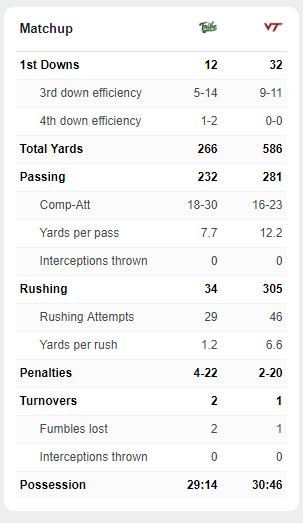 “Our offense, we put up points, but I think there’s a lot of room for improvement.” said Josh Jackson, who finished 12-for-16 with 217 yards and one touchdown through the air, and one on the ground. “We had a couple fumbles, so there’s those things we need to get better at. Putting up points like that and running the ball like we did, it’s good to see guys get in and get those types of reps.”

This was the type of game where the Hokies could afford to test the waters and throw the backup quarterbacks into game action. Ryan Willis got the reps as QB2 and Hendon Hooker entered the game in the fourth quarter. Both Willis and Hooker garnered their first career touchdowns with Virginia Tech. Hooker’s 69-yard rushing touchdown was of particular interest, demonstrating his breakaway speed and rushing ability that could undoubtedly help this offense later in the season.

Steven Peoples impressed early on, amassing six carries for 55 yards (9.2 average), two receptions for 34 yards, and two rushing touchdowns, all in the first half. The pride of Galax, Peoples was true to his bowling ball description, bullying some William & Mary defenders while picking up tough-earned yardage.

After showing some flashes in game one against Florida State, redshirt freshman Terius Wheatley exhibited his explosiveness and appears to have firmly planted himself as the third tailback for the Hokies. Wheatley finished with seven carries for 58 yards (8.3 average) behind a shuffling offensive line that rotated a slew of different players.

The Hokies finished with 46 carries for 305 yards on the ground. Against last year’s FCS opponent Delaware, Virginia Tech was only able to muster 81 rushing yards on 28 attempts.

“Last year in this game (against Delaware), we got it handed to us between the technique and scheme they ran and their physicality up front,” Fuente said. “That’s pretty obvious. We reminded them of that, I promise you that, but certainly a better performance running the football, and hopefully we can continue that as the season goes on.”

Damon Hazelton, the Ball State transfer, established himself as the physical receiver who can go up and get it. Hazelton added another touchdown, his second of the year, and grabbed four catches for 107 yards, filling the void of the vertical threat that Virginia Tech lacked in 2017.

While the offense did its job, Bud Foster’s defensive unit wasn’t far behind, holding the Tribe’s offense to 266 yards, including only 100 in the first half. Virginia Tech allowed 29 carries for only 34 yards (1.2 average) on Saturday.

“Anytime we can get off the field and get the ball back to our offense, that’s critical,” Foster said. “A key point early was when we turned it over early and we came right out and the next series created a turnover. That kind of got the momentum back going our way. I thought that was a big, big play early in the football game.

“If we can make an offense one-dimensional, that makes my calling of the game a little bit different. It allows your kids to be able to pin their ears back and anticipate certain things. Anytime we can stop the run, that’s critical in our success.”

However, the chief concern for the Hokies will be the potential loss of defensive tackle Ricky Walker.

Walker, the senior captain and lunch pail holder, hobbled off the field in the first quarter with an apparent foot injury and never returned to the game. The 6-foot-2, 300-pounder was later seen on the sidelines in a boot. Walker was banged up Monday night in Tallahassee, and he’s truly the one player who the Hokies can’t afford to lose in a thin defensive tackle unit. The Virginia Tech coaching staff remains optimistic.

“Yes, would be the answer to that, in terms of precautionary,” said Fuente. “Whatever they looked at, the results were good, and we’ll know more as the week goes on.”

Without Walker on the field, William & Mary scored its first touchdown against a Bud Foster defense. The Hokies held the Tribe to field goals in the 2007 and 2014 meetings. Still, the Hokies were able to get their fair share of reps for the backups. Virginia Tech fans were able to get their first true look at prized recruit Dax Hollified, who registered five tackles. Freshmen Chamarri Conner and Rico Kearney tallied five and three tackles respectively.

Virginia Tech now has a full week of preparation before East Carolina, 41-19 winners over North Carolina, comes to town next Saturday. Kickoff from Lane Stadium is scheduled for 12:20 PM and can be seen on ACC Network. Check your local listings. 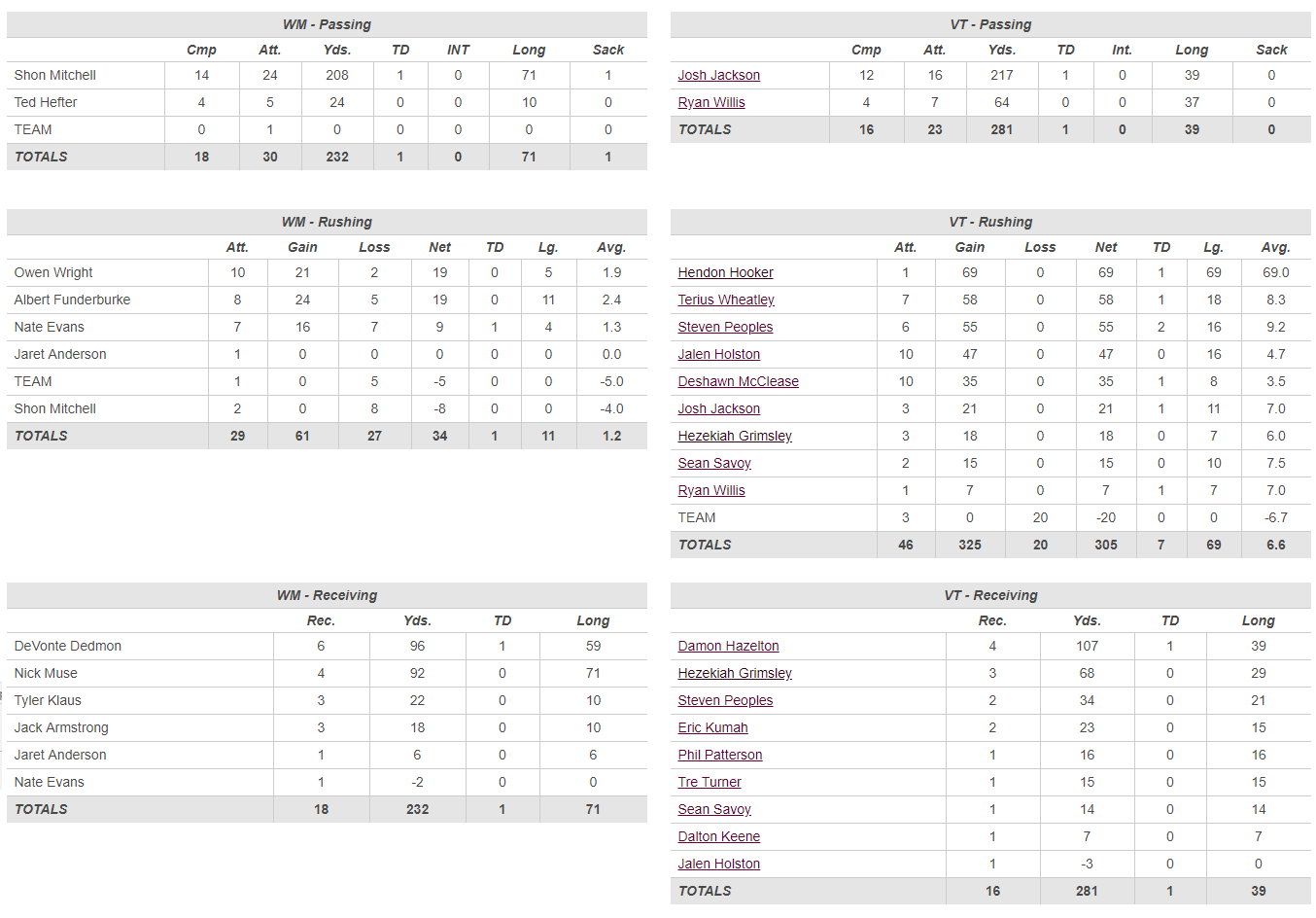