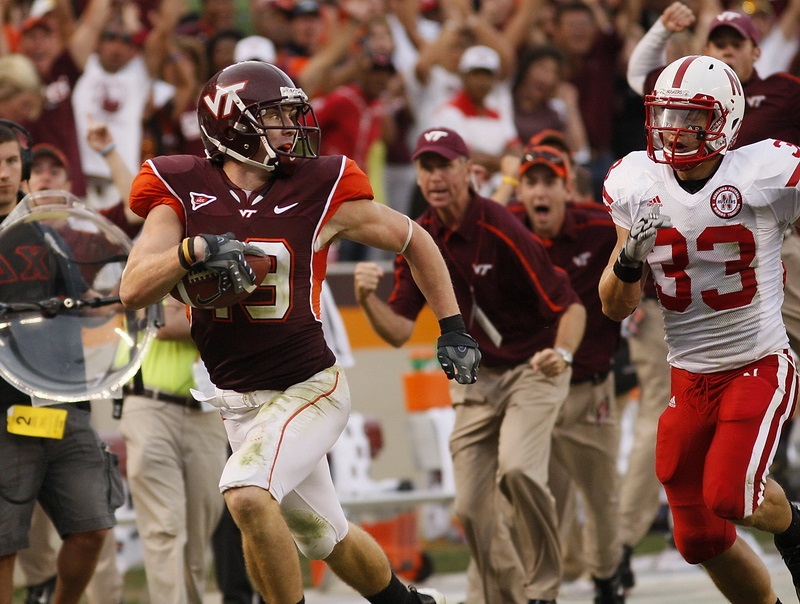 It’s the people in life who will turn moments into memories. For former Virginia Tech wide receiver Danny Coale, a glance back at his career in Blacksburg and his time since has revealed this saying to be true.

“Honestly, I think it’s the people,” said Coale when asked about his favorite memories at Virginia Tech. “Playing for Beamer and Foster…I think that’s the thing I’ll always hold close is I genuinely believe it was a tremendous coaching staff. The entire support system there is remarkable, and just the people at Virginia Tech were phenomenal. It’s such an awesome following, there’s such a passion for the school. I knew it when I was there, but you really get a sense of it when you come out and you’re talking with guys who are playing, and they’ve had three different coaches in four years. I have a true appreciation for the way coach Beamer ran his program. I just have a true respect for the Tech community because it’s just the people all around from football to outside of football are just awesome.”

The Lexington, Virginia native was always a fan favorite as the shifty receiver who collected 165 receptions and 2,658 receiving yards during his four-year career while donning a maroon and orange uniform. Coale was the model of consistency, improving his productivity every year from 2008-2011. As Virginia Tech just defeated Florida State on Labor Day, it’s Coale’s experience against the Seminoles in the 2010 ACC Championship Game that still stands out.

“I often think about the ACC Championship Game against Florida State,” Coale said. “Maybe it’s because of the game [this week], but that was an awesome season. It didn’t start how we had planned, but we really came together as a team and put together a string of wins and found ourselves in a position to compete for an ACC Championship. I think there were a lot of life lessons in that season. I often think about that game and a host of others.”

It was his football playing career after Virginia Tech that just wasn’t meant to be. After getting drafted by the Dallas Cowboys in the fifth round of the 2012 NFL Draft, Coale bounced around a few practice squads, never really getting a chance to showcase his sure hands on the outside due to a bevy of injuries – a torn quad, a torn ACL, a broken foot, and a broken pinky.

However, Coale’s life is about so much more than just football. In February of 2013, Coale married his college sweetheart, Natalie, the girl he met his freshman year in the introductory Communication Skills course. Coale moved back to Pittsburgh, where Natalie was from, and began his search for a career post-football.

“We moved from Dallas and made Pittsburgh home,” Coale said. “Really didn’t think of it as a long-term play honestly. Once I stopped playing football, I knew I had come to that point in my life.”

Using a finance degree that he earned through the Pamplin College of Business at Virginia Tech, Coale began contacting alumni in the industry and sorting through opportunities in some of the major cities. Instead of looking elsewhere, someone Coale knew told him to have a conversation at PNC Financial Services corporation based in Pittsburgh. Nothing was available at the time, but a few months later a job opened up, Coale interviewed, and the rest was history. Starting off as an Investment Banking Analyst in 2015, Coale has ascended to Senior Associate in Loan Sales and Trading.

“Playing football, I really didn’t do any internships, so I didn’t really have a sense for what I wanted to do with finance,” Coale said. “I knew half my battle was just going to be who I worked with. Playing organized sports, I had a really good sense for that. I had some conversations with a lot of different places.  This one was just a really, really positive one. Never know where life takes you, but right now it’s in Pittsburgh.

“I often think about those games at Virginia Tech and just my time there, and it was unbelievable. It was an unbelievable time there and I’ll always have that with me. I was excited at the time to just challenge myself in new ways. It was kind of bittersweet, but at that moment in my life, I was ready to accept things and move on.”

The good times kept rolling for Coale as he and his wife welcomed their first child, Abbott, in 2016. Baby No. 2 is on the way, as their daughter is due in the middle of September. What once was a quiet post-football life has turned into one with a little more noise, but a lot more joy.

“She [Natalie] was my support system playing football,” Coale said. “She stayed with me throughout college, and it’s been awesome having this little boy. He’s a fun age. His personality is just starting to show. It’s been really neat.”

Coale has been a living testimony of someone who kept the faith despite the doubts that lay ahead. Even when things were on a downward spiral, Coale knew that wherever he was placed an opportunity would arise.

“I have a faith about myself as well, and I do truly believe there are plans, and as much as we try to dictate them, we can’t,” Coale said. “I always believe that timing is perfect. I’ve seen it fall into place and the opportunities I’ve had since football.”

The Virginia Tech faithful will always remember Coale for his life on the gridiron, but now he’s finding a greater purpose that can’t be taken away.

“As athletes it’s easy to have your identity wrapped up in athletics, in the sport that you play,” Coale said. “It’s what you’re known for your entire life. When that’s gone it can be an interesting transition. I find my identity in being a husband, and a father, and a believer. I just have an awesome peace about where we are right now. I’m excited for it.”

“As someone who’s played and is a fan of the team, I appreciate and respect the way (Fuente) runs his program. I’m proud of the way he’s done it. Coach Foster is probably one of my favorite people ever. He stood on the table for me when I was a recruit in high school. He stayed true to me throughout my college career, so I have no doubt that his guys will show up. There’s some attrition, but I think he’s been a very good fit for Hokie football, for Blacksburg, for the community. I’m excited to see what they do not only on the offensive side of the ball, but what coach Foster has. He’s been around a long time, but he always has had something up his sleeve. I’m excited to see how his unit performs too.”